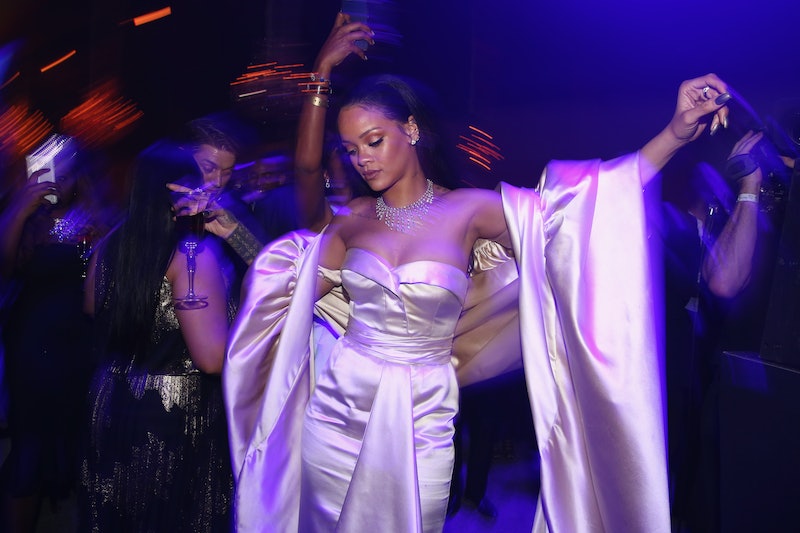 In news that shouldn't surprise anyone, Rihanna will not only perform at the MTV Video Music Awards 2016 at Madison Square Garden on August 28, but she'll also take home the most prestigious award of the night: The Michael Jackson Video Vanguard Award (also known as the Lifetime Achievement Award), which honors an artist's contributions to MTV culture and the music industry. In 2015, it was awarded to Kanye West, and previous recipients include Beyoncé, Britney Spears, Madonna, David Bowie, and The Beatles. Clearly, the award is a huge deal for any artist, as it's a testament to the permanent and noticeable impact an artist has had on the world. In short, the Video Vanguard Award is celebrating Rihanna's accomplishments, of which there are so many!

At 28, Rihanna has achieved more than most 20-somethings can even dream of, including the release of eight studio albums, numerous film roles, and collaborations with famous musicians and fashion designers. A quick look at Rihanna's discography will have you feeling overwhelmed, because the sheer volume of singles the singer has released is ridiculous. Not just that — but Rihanna's career is also constantly evolving, as she's unafraid to take risks, and is always mixing up her look to keep her fans guessing. Here are just some of the reasons the Video Vanguard Award is honoring Rihanna in 2016.

From 2005's Music Of The Sun, through to 2016's Anti, Rihanna has worked non-stop to create a catalogue of music she should be immensely proud of, and filled with albums listeners return to again and again.

2. She's Collaborated With Everyone

Rihanna's collaborated with some of the biggest and most successful artists in the world. With the likes of Jay-Z, Paul McCartney, Kanye West, Calvin Harris, Nicki Minaj, Coldplay, and Future in her discography, there are bound to be many more collaborations in her future.

3. She Has A Huge Celebrity Fan Base

Sure, Rihanna hasn't collaborated with everyone, but she counts among her fans superstars like Adele, which is a huge achievement.

4. Her Style Is Impossible To Replicate

The "Umbrella" singer is constantly mixing up her style, and refuses to be pigeonholed. She's not afraid to change her look, wear an unusual outfit, change her hair, or pair surprising items together. Rihanna is #stylegoals through and through, which is probably why fashion designers want to work with her.

Rihanna's recent collaboration with shoe designer Manolo Blahnik is the latest in a long line of fashion houses the singer has worked with. From being the face of brands like Armani and Dior to becoming the Creative Director of the women's line at PUMA, Rihanna's fashion kudos is only growing.

The "We Found Love" singer is keen to connect with her fans online, and regularly posts to Instagram. From exclusive footage, to sneak peaks at new content, Rihanna is great on social media, and isn't afraid to share her projects with the world.

7. Her Perfume Line Is Incredibly Successful

8. Her Songs Are Featured On Numerous Soundtracks

Most recently, Rihanna's song "Sledgehammer" was featured on the Star Trek Beyond soundtrack, but her music has also been featured on a plethora of TV shows and movie soundtracks including Grey's Anatomy, The Vampire Diaries, and Home.

9. She's One Of The Co-Owners Of TIDAL

Along with the likes of Jay-Z, Kanye West, and Madonna, Rihanna has a stake in streaming service TIDAL, showing she's committed to the future of music.

Rihanna's won nine Grammys, three MTV VMAs, and seven People's Choice Awards, to name just a few of the trophies she has in her collection so far.

When she was 18, Rihanna founded the Believe Foundation in support of terminally-ill children. Since then she's backed numerous campaigns for causes such as HIV/AIDS and cancer, and serves as a UNICEF Ambassador.

12. Her Advice To Fans Is Always On Point

Rihanna has schooled other celebrities in how to have the best interactions with fans. From offering relationship advice, to helping people believe in themselves, Rihanna supports her fans in the best way, and the care and attention she shows to her followers is above and beyond.

There is simply not enough space to describe all of the many and varied reasons why Rihanna deserves the Michael Jackson Video Vanguard Award. Her accomplishments speak for themselves, and it'll be exciting to see where Rihanna's career takes her next.