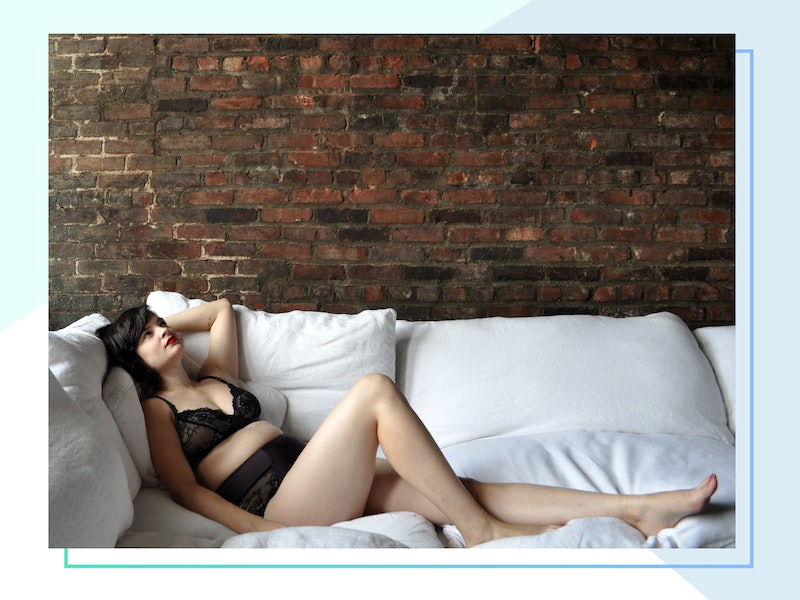 One of the first times I interacted with entrepreneur and designer Mallorie Dunn IRL was at a body positive panel in Jan. 2016 that included Refinery29's Kelsey Miller and plus size model Tess Holliday. A fan of her clothing brand SmartGlamour came up to Dunn and myself requesting a photo. The person in question was tangibly self-conscious in front of the camera, telling us as she got ready to pose that she didn't "know how to stand for photos." Dunn, without pause, retorted, "You just stand like a human."

It's a seemingly simple sentiment: We're all just Homo sapiens here, after all. Unfortunately, so many of us have been conditioned to believe that looking like a ~good~ human — and looking like a good female human, in particular — means molding and posing one's body into proportions more akin to those of a model on the cover of Vogue than your everyday gal with a visible belly outline and boobs that'd prefer to naturally nestle in the underarms rather than beneath the chin.

Despite running what it arguably the most size inclusive clothing brand in the world (SmartGlamour sells sizes XXS through 6XL and offers custom measurements) and living and breathing feminist, body positive theory, however, Dunn herself has long struggled with one particular aspect of her body: her height.

She didn't always have difficulties embracing her 5'8.5" form, of course. In fact, Dunn tells me over jalapeño margaritas and tater tots, "Because I was taller than all my female friends [in middle school], I became more of a protector. If guys were messing with my friends who were five feet tall, I’d go over and just be a huge bitch until they left them alone."

But as is the case for so many people, the insecurities arose when others made her feel as though they should.

"I dated boys through high school and college who were mostly shorter than me, and [they] like all had problems with it," she says. "I had a guy in college pick me up for a date and blatantly tell me I needed to put flats on because he was uncomfortable. In the moment, you think you’re shaking it off. But then you see yourself making choices to make yourself smaller."

Similarly, it was remarks about her "chicken legs" or "bony butt" in junior high that made the designer feel "too thin." "I hadn’t hit puberty yet, and I was super lanky, thin, and gangly," she recalls.

A little later in life at age 16, Dunn actually had the opportunity to model. Essentially scouted at a dance recital, she ended up passing up the chance because it wasn't for her. She didn't like the attention, preferring to be behind-the-scenes.

But in college, one partner in particular — upon learning that she'd helped a friend at the Fashion Institute Of Technology with some school-related catwalk modeling — pressured her to pursue the field anyway. "He was like, 'Why aren’t you doing this? Why aren’t you using your looks to get money?' He convinced me that I should really do that, so he was like, 'We could get you a portfolio together,'" she tells me. "So we did that, and I got signed by a modeling agency," when she was about 20.

During this time, Dunn participated in "lots of random jobs," including a commercial for Cosmopolitan's iPad app alongside Jersey Shore's Pauly D. "There were just a bunch of conventionally pretty girls dancing around [him] and I was wearing a ridiculous dress that I would never wear in real life," she says. "I did random things like that, which were all very silly."

It's clear as she's laughing off these times that modeling wasn't for her. Being in any field that prioritizes aesthetics above all else (like her brief stint as a bottle waitress at a Manhattan club for which you needed a password to get in) clearly isn't for her, either. "The guy I was dating put so much emphasis on the way that I looked that it made me uncomfortable, but also like I had to keep it up," she tells me. "He would tell people, 'I came to New York City and started dating a model,' and that became who I was."

Although modeling was her job, it wasn't who she was. Dunn was also studying for an arts degree at the Pratt Institute, "yet no one would ever ask me about those things," she adds. "He treated me like this weird little trophy that he had collected and it was exhausting."

Dunn then started facing the issue of only ever being lauded for her beauty, all the while still feeling at odds with the perceived issue of her height. It wouldn't be until she met her now-husband in 2012 that that began to change.

She had about a quarter of an inch on Ian when rocking flats, and quickly started making a mental registry of all the shoes she couldn't wear while on dates with him. But one day, she let that information slip.

"He was like, 'no no no no no,'" she laughs. "He told me something like, 'When we back to your place, you’re finding your biggest pair of shoes and putting them on. And you’re just going to wear them around the house until you’re OK with it.'"

This moment — and her entire relationship with Ian, for that matter — was a game-changer. But so was starting her business: A little corner of the fashion industry where "people of all sizes catered to" wasn't just a money-making, clickbait-y slogan, but a reality. Dunn runs the business entirely on her own, hand-making clothing in extended sizes, putting together diverse photo shoots and campaigns, running her social media accounts, and managing the company's advertising — all the things so many big-name brands say are impossible to do and still make money. The designer does, in fact, make enough money to survive. She and Ian don't really share their incomes, dividing their halves of the rent evenly and splitting all the bills — occasionally treating each other to dinner, perhaps, but little else.

She's aware that she'll probably never be rich, but that's not what she ever really wanted, anyway. "If I wanted to get super rich, I also wouldn’t be making ethical clothing. I’d be using a sweatshop," she jokes. She'd probably be avoiding social media confrontations with internet trolls who feel the desire to comment on the looks of her models or other people, too. But hey, someone's got to educate these people.

Something that sets Dunn apart from a lot of women her size, weight, and skin color, however, is her recognition of aesthetic privilege. "You just have to remember that [body politics activism] is not about you," she tells me. "It’s kind of like when someone asks you to be a bridesmaid and you turn it into what you would want. You need to be aware and vocal about the fact that you have privileges, and help other people like you recognize their own."

Of course, anyone can discuss and dissect their own struggles. Anyone can analyze how sexism, at large, impacts women's body images regardless of their waist size. But focusing on deconstructing the struggles of those who have it worse should always be the priority, she feels.

Dunn does this by including models of all sizes, shapes, ages, races, and gender identities in her catwalks and lookbooks alike, and sometimes even prioritizing emphasis on the more marginalized models out there. In Nov. 2015, for example, she only utilized plus size models for her autumn/winter collection. She makes sure to shout-out a "SmartGlamour Woman (Or Person) Of The Week," every seven days as well, using her "platform to talk about people who aren’t me."

Dunn frequently receives grateful messages from her customers: A transgender woman in transition who's never found a dress to fit her shoulder width. A 40-year-old woman who's never worn short sleeves but finally feels OK doing so. It's feedback like this that makes Dunn certain her focus on other people is paying off.

But Dunn learns from her customers, too. Sure, she has encountered preconceptions about her intellect that often come from looking like a traditionally "pretty girl," and has been told time and time again that her height, loudness, and personality make her "intimidating," but she's been able to overcome the tropes. "I think a tall, loud woman who is confident or at least performing as confident is intimidating to people," she tells me. "It’s a thing that I don’t mind being [now], so I think that I also play into that. 'Oh, you think I’m scary? Then I’m going to put on a pair of heels an extra inch tall.'"

"If people have been telling you your whole life that you’re intimidating and it’s a bad thing, you can subvert it," Dunn later adds. Today, she relishes in being the tall, loud, feminist she is. And she's got the sky-high stilettos and successful size inclusive brand to prove it.

More like this
Instagram & Facebook May Finally Lift Their Notorious Nudity Ban
By Allie Fasanella
Selena Gomez Dismissed Trolls' Comments About Her Body After The Golden Globes
By Stephanie Topacio Long
Phoebe Dynevor Serves ‘Bridgerton’ Underboob In Stunning Floral Gown
By El Hunt
24 History-Making Black Women You Probably Didn't Learn About In School
By Ayana Lage and JR Thorpe
Get Even More From Bustle — Sign Up For The Newsletter
From hair trends to relationship advice, our daily newsletter has everything you need to sound like a person who’s on TikTok, even if you aren’t.