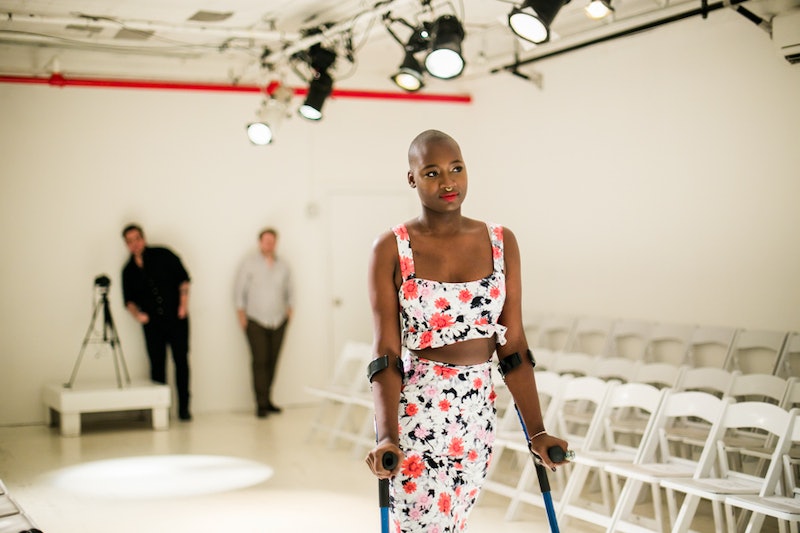 I’m sitting front row at SmartGlamour’s Spring 2016 fashion show, my 16-year-old brother immediately next to me. He’s grown up in a pretty homogenous place — white, middle/upper middle class, New Jersey suburbia. Now that he’s getting older, I feel like it’s my Elder Democratic Sibling duty to introduce him to different types of people; to new experiences. As we begin to watch a myriad of women do their catwalk — women of different skin colors, sizes, ages, styles, identities, presentations, and physical abilities — his face remains pretty apathetic. He's got his metaphorical teenage wall up that stops him from revealing too much emotion, and I can't tell what he's thinking. Then a model with a beautifully decorated prosthetic leg walks inches in front of us. "This is neat," he says. "They've actually used every kind of person."

"The three main goals of SmartGlamour are: To empower women through clothing and help them on a road to body acceptance, to make good quality clothing that is sold at affordable prices, and to cut away at women-on-women hate that stems from insecurity and the belief that beauty and brains cannot go hand in hand," founder and designer Mallorie Dunn tells me via email. A visit to the brand's website will reveal that every garment is made in sizes XXS through 6XL, as well as to custom measurements. It's the most inclusive size range you can find out there. And the models at Dunn's Feb. 19 show in New York City? They echoed precisely that. On a runway filled with about two dozen women, there was more intersectionality and diversity than I've ever come across. Not at Fashion Week, not at Lincoln Center, not in Bryant Park has the sartorial world seen anything quite like this. But why the hell not?

The reality is that Dunn is a one woman show. She runs her business independently, hand-making every garment, ensuring those garments are made ethically, building and maintaining a social media presence, involving herself with body positive activism, and catering to as many women as she possibly can. Photographer Nigel Barker famously told Salon in 2013, "Designers simply can’t afford to make dresses in 10 sizes for a sample. They really want to make one size that’s a sample size, and for whatever reason, they decide it’s gonna be a four, or if it’s a large size, it’s gonna be a six." And the excuse that more sizes means too much money spent is one most plus size women have likely heard before. So how does Dunn manage it when working on tight budgets for an indie company?

"Is a 22 dress bigger than a 10? Yes. Of course. Does it take more fabric? Yes. Of course," she tells me. "But here's the thing — I make clothes from XXS to 6X. I cost my clothes based off of a 1X. That's our median size. It also happens to be one of the most commonly ordered sizes. The 'average American woman' is around a size 14. So it only makes sense that that's the size I sell the most. Do I sell XXSs and 6Xs? Yes! But much less in comparison. They even themselves out."

Dunn goes on to note that sometimes, she might get in more plus size orders than straight size ones. In those instances, her profits could potentially be a little bit off. But she tells me "it's worth it." "I'm a small business. I can do what I want, and what I care about, and what I'm dedicated to — and I want, care, and am dedicated to making clothing equally accessible for all bodies. There was never even a millisecond when I considered charging more for plus sizes. Never."

Despite the incredibly inclusive nature of the collection, every size of every item comes at the same price point. Many plus size women are well acquainted with the fat tax, but Dunn isn't having any of that BS. There cannot be equality without equity, after all, and that's something she very clearly acknowledges through her work.

In terms of the costs of inclusivity, there are even times when prioritizing diversity has saved Dunn and SmartGlamour some money. "It doesn't cost any more money to bring in varying body types. It's actually cheaper because I am not going through agencies to find my models," she says. "People identify with SG and they appreciate what I am doing — they want to be the face of it — they want to help represent me. I end up with too many model applicants every time [...] But I almost always end up bringing everyone back for future seasons. If you are interested, professional, enthusiastic, and responsible, you can model for us! Those are the only requirements."

In a world that has been body shaming anyone who doesn't fit aspirational tropes of beauty for decades, it can be easy to fall into a pattern of celebrating the little things. A brand just expanded to a (whopping) size 20? Amazing! Mattel just released a "curvy" Barbie that still looks thinner than an average human? Brilliant!

When so many marginalized identities have been starved for representation and visibility, anything starts to feel like progress. But should it? In terms of this hot topic debate within the plus and body positive communities, Dunn tells me simply, "Personally, I have a really hard time cheerleading for companies that are larger than me, but doing less. Because I know they could find a way to do more — but they aren't," she says. "Do I think it's important in general to celebrate the small stuff? Yes. But I am very skeptical of larger corporations' actual intentions. If certain large brands actually wanted to be body positive — they would be. If they actually wanted to be inclusive — they would be."

Of course, some progress feels more genuine than other progress. Designer Carrie Hammer's #RoleModelsNotRunwayModels show similarly tries to put all types of women from all types of professional backgrounds on her runways. Winnie Harlow, a model with vitiligo, has starred in major campaigns since 2015. But turn on any television, visit most Fashion Week shows, go into any mall, and you'll see that one body type still remains catered to more than the rest. Eighty percent of models walking Fashion Month in 2015 were white. And while there's no formal statistic, I'm willing to bet that an even higher percentage of those models were between sizes two and six.

Yet from every corner of social media, consumers are begging and fighting for inclusive change. If there's anything plus size brand Lane Bryant's open Twitter chat with Refinery29 proved, it's that women want to see more models of color, more models above a size 22, and more diversity across the sartorial board. "[Brands seemingly] use models that they think people will see and want to be like — most of the time this means thin. But honestly — even in mainstream plus size brands — they use hourglass, tall, smaller plus bodies. They are westernized in appearance, skin glistening, every hair perfectly in place. Those types of images don't appeal to me. Reality does," Dunn tells me. "We've all seen comments upon comments from women asking to see representation of themselves in brands' images [...] To be frank, those other brands have no excuse. They just don't want to do it."

Sometimes when I'm feeling particularly bleak, I cannot help but wonder if those other brands will ever make strides to becoming more inclusive. I wonder if the idea of every clothing collection becoming available from sizes XXS through 6XL and beyond is a pipe dream; if the thought of seeing every type of body represented on all runways is a goal best reserved for my slumber. "One of my least favorite things about fashion — or about how fashion is presented and perceived — is that it is this pretentious club that no one can be a part of," Dunn tells me. "We need to let people in. We need to stop worrying about looking 'cool' — about being the newest, freshest, and most innovative."

Perhaps that's going to be the biggest hurdle to overcome if fashion is ever going to become any kind of haven for inclusion. But when you consider the realities of size discrimination, ageism, ableism, racism, sexism, and all the fucked up "isms" we still have to contend with, it all seems so daunting. "I think that because of SG, I live in a bubble of feminism, inclusivity, and empowerment — and I love that bubble — but when I step outside it into the real world I am abruptly reminded of just how BAD the majority of humans feel about themselves," Dunn tells me. "But the fact that body positivity is even a buzzword means that we are further than we were before! I'm honestly not sure if companies, industries, and corporations as a whole will get on board — they probably won't. Not in our near future. But the more we talk about it, the more we make moves, the bigger our bubble gets."

I contemplate the buzzword status of body positivity every day. I ask myself whether it's a good thing that it's been seemingly co-opted — that it's now utilized to mean "all bodies are good bodies" without any kind of radicalized push for change accompanying it. But as Dunn says, perhaps this "it-word" status is something to be proud of. Four years ago, body positivism and issues of size acceptance were limited to small corners of the Internet. Now there are folks in the mainstream paying attention. There are people realizing that something like clothing — previously deemed a vain, superfluous, shallow interest — should be accessible to all; and that it has the potential to incite change.

"Using clothing as a tool towards body acceptance is definitely our number one [goal]," Dunn tells me. "I think that when it comes to body positivity, people need something tangible sometimes to grasp it, or get started. And because shopping and clothing and fit and sizes have such a negative stigma, flipping that script is a good place to start."

The thing is, there really is no excuse for brands that choose not to cater to as many people as possible. If their reasoning is that non white, non thin, non able, non cis bodies won't sell clothes, they need only look on Twitter to find thousands of voices demanding that diversity. If cost is behind their lack of inclusion, well, SmartGlamour is proof of concept. It's 100 percent possible to make beautiful, ethical clothes for all bodies, and still take home a paycheck. And if their logic is simply that there does exist one principally desirable body type in this world, and that that body type is the one they'll use to sell clothes, well, they need only get over themselves. Like all things in this world, beauty is subjective. And pitting one type of body against another is cringingly harmful.

"'Girl on girl' hate stems from insecurity, which creates competition," Dunn tells me. "However, if you take those exact same women and put them all next to one another on the same equal platform, you give them all the same footing. You tell them all they are equally wonderful, beautiful, worthy, and important — they automatically support one another."

She's seen it happen during SmartGlamour shoots. I've seen it happen at SmartGlamour shows. There is no one body, style, hair color, or skin tone that's "the best." The perpetuation of anything otherwise is not only damaging, but tired. Most people seem to crave a sense of realism in the way their products are sold to them. And if there's anything to be learned from SmartGlamour's recent show, it's that putting all the bodies, all the styles, all the identities on a runway will leave you with a hell of a lot of people feeling not only ready to buy your products, but ready to reevaluate all the myths they've been taught about what it means to be worthy or beautiful or accepted. That's the power fashion can have if brands just let it.