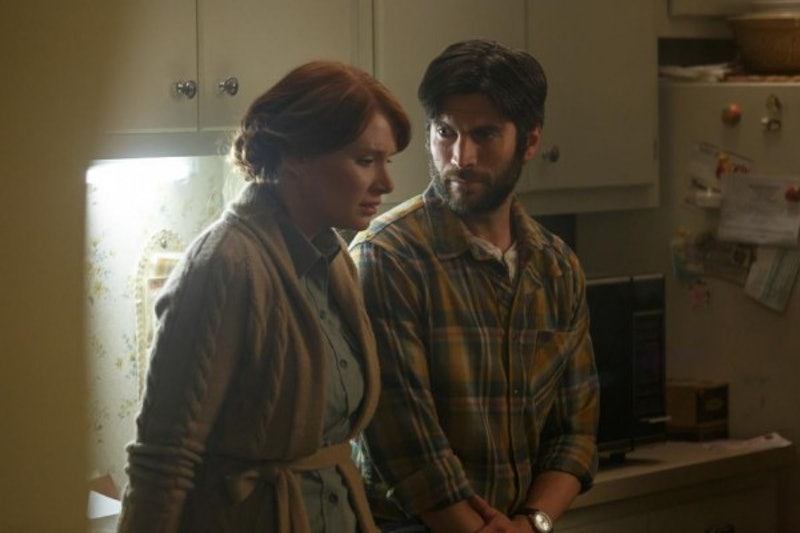 The strong family vibes Bryce Dallas Howard and Wes Bentley’s characters offer in Pete’s Dragon warm my heart like nothing else. In the film, Grace (Howard) and Jack (Bentley) have the coziest house ever, believe in dragons, and have story time with their daughter Natalie (Oona Laurence) and her friend Pete (Oakes Fegley) at night. But there’s no surprise as to why many people (adults included) might leave this movie wishing these two were their parents in real life. I spoke with the cast to learn how elements like Howard (35) and Bentley’s (37) tight, real-life families, and an on-set curse jar helped the gang bond on-and-off screen and provide serious family goals.

Howard and Bentley both have a kid of their own, ironically a son and daughter, and it helps that their families are close. So close, in fact, that Bentley says Howard “felt comfortable enough” to break into his house in New Zealand (where the film was shot) and retrieve a gift he got for her. Howard says the families even went on vacation together and stayed in a house on an island off the New Zealand coast. Their kids are super close and Howard’s hubby Seth briefly worked with Bentley on AHS: Hotel.

Both actors can agree that being real-life parents allows them to bring an extra something to the table when portraying a mom and dad on screen. “That kid is born and you’re the protector! It came pretty naturally,” Howard says of her nurturing character Grace. “Making a film for kids and having your own kids on set... it just makes it so much more fun and so much more meaningful,” she says. The experience reminded Howard of her own childhood, always being on set with her father Ron Howard.

Bentley also embraced his on-screen kids to the fullest. “We’d all joke and play together. They felt like my kids,” he says. “I cared about them, I wanted them to be comfortable and safe, that’s the feeling you get when you’re around kids.” The feelings were mutual, because Fegley (11) and Laurence (13) adored their movie parents. But honestly, how couldn’t they?

Although Howard and Bentley were amazing parent figures to these kids, that doesn’t mean they didn’t misbehave now and then. “When somebody would curse on set, Brent, the second AD, would always say, ‘Keep it Disney!,’” Fegley jokes. Bentley tells us they even had a curse jar on set, but still, he attempted to keep it PG. “I’m pretty good about it, ‘cause I got my own kids I watch it around. We had to watch the jokes,” he says. “You unintentionally make innuendos and when you’re on a movie set, you gotta remember who’s there sitting behind you.” Awkward.

Howard raves about how cool of a dad Bentley is, saying, “Wes is incredible. So funny and so cool. He’s not serious at all. I screech like crazy around him. He is hilarious.” If only he felt this way. “I’ve never felt cool. It’s not like all of a sudden I’m not cool, ‘cause I’m a dad,” says Bentley. “I wasn’t cool before I was a dad.” I highly doubt it. Plus, it seems like he’s got the whole dad thing down pat.

“I’ll be disciplinary when I have to be. I don’t just want to be their best friend. I want to be their dad,” he explains of his own children. “I want them to be guided through tough things and learn lessons.” He says he gets his inspiration from his own parents and I can’t think of anything more adorable. “That’s how my parents are too, I feel very close [to them], but I didn’t want to f*ck with my dad,” he says while laughing. “I didn’t want to cross that [line], but he walked that well.”

All-in-all, having to hold back on cursing and a sexual innuendo or two was completely worth it. Although these two are obviously kick-ass parents no matter the setting, what’s important is that they play the role of the child sometimes, too. “We’re still kids,” says Howard. “Sometimes when I would get really sleep-deprived and my husband and I were going on 72 hours without sleeping or eating, I would turn to him and be like, ‘We’re kids too! We need to take care of ourselves, too!,’” she says.

Howard explains how a great parent is one who protects and nurtures themselves as much as their children. “We have to kind of remember that, as precious as our children are, we too our precious and [need] to protect our innocence,” she says. As I said: coolest. parents. ever.