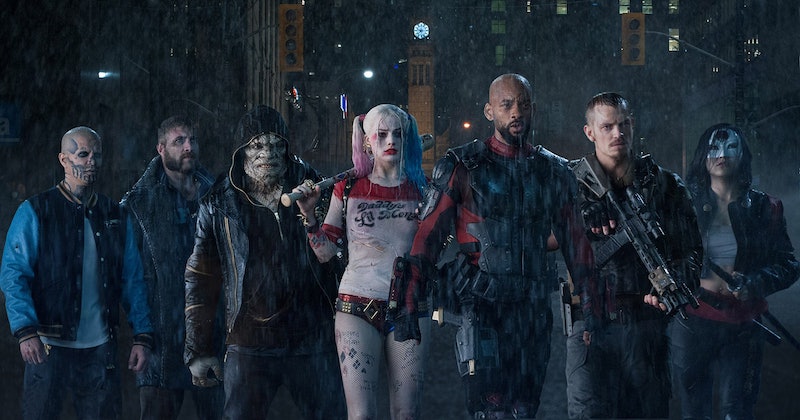 Joel Kinnaman made a perfectly competent Colonel Rick Flag in Suicide Squad, but, when juxtaposed with the full-on crazy of The Joker or Harley Quinn, his straight man vibes meant he didn't always take center stage. Which is why it's so fascinating that he's now the one cast member who is dominating the conversation when it comes to the Suicide Squad 's bad reviews. In Kinnaman's interview with Vulture to promote the indie movie Edge of Winter, he got sidetracked and made some insightful comments about the way the poor reviews had actually helped the movie rather than hurt it.

According to Kinnaman, Suicide Squad was made with just one goal in mind: "It really only has an ambition to entertain. There’s no big political aspirations about the film; it doesn’t take itself that seriously." But he goes into more depth: he believes that although the bad reviews hurt to read, that they actually aided the film by lowering expectations. In his opinion, cinema-goers came out of the movie delighted and surprised because they'd been expecting something terrible. The reviews made it easier for the team behind the movie to do what they'd set out to do all along: entertain people.

I can’t remember ever seeing a bigger disparity between reviewers' and fans' response to a film. It really was night and day. We’ve just been showered with love and appreciation for this, so it’s been pretty phenomenal. Sure, the film is not perfect. But the kind of vitriol that it got? It sure as hell didn’t deserve that. I think it actually might’ve been good for the film. Now people don’t have too-high expectations for it. It reset that a little bit, and people went into the theaters and just got entertained by what they saw. So I was really happy with how that whole thing turned out.

I can't help but feel that Kinnaman has a point.

As much as the terrible reviews of Suicide Squad might have felt like a worst-case scenario for the filmmakers, trust me, it's not. To me, a worst-case scenario is the exact opposite: a movie that's overhyped by critics and ends up disappointing fans. (Usually in direct proportion to its hype, because what's worse than going to a pretty good movie with Mount Everest level expectations?) As important as critics are, it's the audience who makes or breaks a film, and the numbers of tickets sold. If you browse #SuicideSquad on Twitter, while obviously there are a whole bunch of negative responses, on the whole, audiences seemed pretty delighted by the movie.

Here are a few tweets which felt representative of the general fan vibe on Twitter — the snarkier tweets tended to come accompanied by the blue tick signallng an organization or public figure:

The fans weren't just vocal on social media about their love for the movie; they showed up en masse to support it. Forbes has stated Suicide Squad took home "$326 million worldwide" after its first weekend, and has set the record for being the most profitable movie for a Tuesday release in August (yep, that doesn't sound very impressive, but the last film to take that place was the high-grossing Guardians of the Galaxy movie). Arguably, Kinnaman's reasoning isn't just some neat PR statement; it's actually true. The critics made the movie sound so bad that people genuinely ended up liking the movie and being entertained by it.

So yes. Those reviews must have cut deep — but, in the end, I bet Kinnaman and the rest of the crew are secretly glad they exist. To cite that creepy children's saying: "Sticks and stones can break your bones but words can never hurt me." They've taken home a box office record, Harley Quinn is getting a solo movie, and the fans are tweeting their support. Words don't seem to have done much to hurt this movie, much less destroy it.