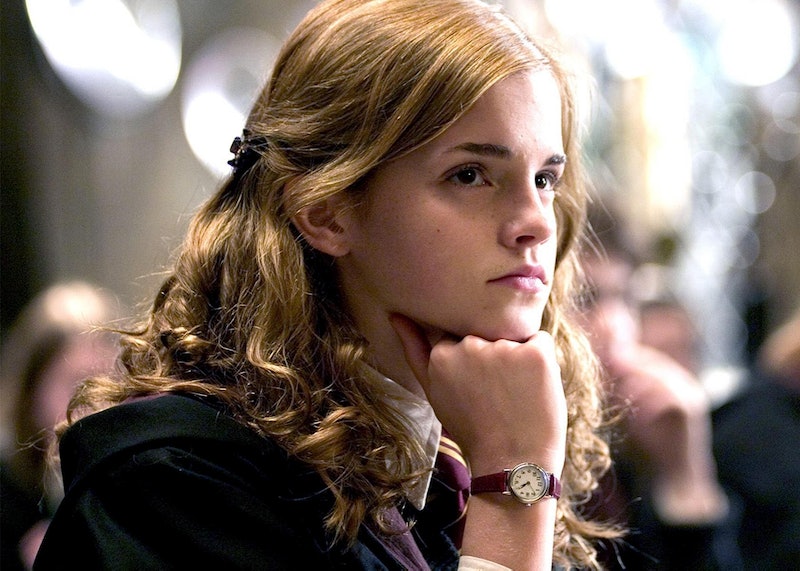 Like most Harry Potter fans, especially the female ones, Hermione Granger shaped my childhood. I was one of those kids born at the perfect time to connect with Harry and his friends; when I first got my hands on Harry Potter and the Sorcerer's Stone in 1997, I had just turned 11, a birthday that I then watched Harry Potter himself celebrate in the book. Basically, I came in completely ready to project my thoughts and emotions directly onto one of these characters, and Hermione was the obvious choice. I was a voracious reader as a kid, so of course I'd read female characters before. But never one quite like Hermione.

For one thing, she was written by a woman — god bless you, J.K. Rowling — which made her much more fleshed out than other portrayals of women in the male-written books of my past. For another, she was one of a group of guys, and she held her own. More than held her own, in fact: there was never any doubt that Hermione was the smartest and most pragmatic of the threesome that included her, Ron, and Harry. As the books progressed, she earned more and more respect for what she was bringing to the table. And what she was bringing to the table was something that, growing up, was called "being a nerd" and wasn't meant to be a good thing.

In fact, I think that was the piece that was most meaningful for me when it came to Hermione: people didn't start out liking her. I read so many books where being smart or stubborn or sassy was inherently rewarded in these young women, and I'd never experienced that in real life. I was a real pain-in-the-ass as a kid, very much a teacher's pet, like Hermione; like her, I based my own value on what I knew, or how I could perform in an academic setting, and didn't have the clearest idea going in as to who I was. Or more importantly, how to get people to like me.

It seemed to be something that everyone else inherently understood, that I was missing. And I got nothing valuable from seeing the bookworms and brains in my books accepted from the start just for being themselves. Because of reading books like that — which I don't want to call out, because I loved them and am protective of them still — I assumed that someday, I'd figure out whatever it was that I was doing that was driving people away. That I could change my behavior and everything would be fine. That we'd all live happily ever after. Blah blah blah.

But the difference with Hermione is that they didn't start out liking her. Right off the bat, Ron and Harry, and, frankly, everyone else, write off the young witch because she's as outspoken as she is intelligent. Instead of backing down, or trying to make her personality more appealing — which I'd always feared were the options that lay ahead for me — Hermione earns their respect just by being herself. It might not sound like a radical concept, but it was huge for me to see a female character who was eventually treated with more respect not because she altered her own behavior — even as late as the sixth book, Hermione was still a know-it-all who had to be the best in her classes — but because those around her altered theirs to stop being so judgmental or outright mean to her.

And yet as much progress as Hermione made in making friends, it was equally important for me to see the way that Hermione interacted with her enemies, like Draco Malfoy. Many books for children and young adults preach kindness to everyone, and that never totally made sense to me. Sure, it's nice to give people the benefit of the doubt and be respectful. However, if someone is constantly violating your boundaries, being cruel, and proving themselves to be irredeemable as a person, it's not your responsibility to meet them any further than halfway. Maybe some people would've liked to see Hermione take a gentler, more empathetic route with those who pushed her buttons. But, for me, the most important lesson of the book was that you don't gotta play like that.

If someone isn't treating you with the respect you deserve, I'm not saying haul off and punch them. (Or slap them, as in the books.) Violence isn't the answer. But I am saying that it's your right to keep your superior intellect to yourself and spend it on the next person to come by who actually appreciates it. The right people will figure out what you have to offer and, give you the respect you deserve. The wrong ones aren't worth the effort. Thanks to Hermione, to J. K. Rowling, and to Emma Watson, that's a lesson I learned in childhood that has stuck with me all the way to adulthood.