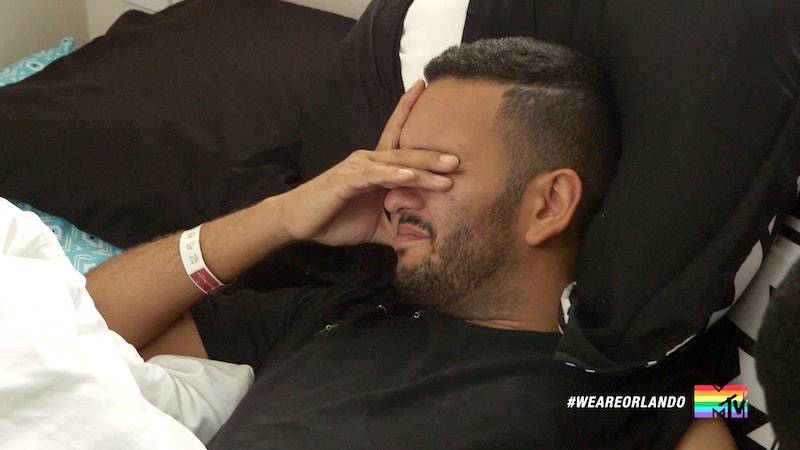 Over the past 18 years, MTV's Emmy-winning documentary series True Life has covered some truly weighty topics, but perhaps no issue the show has tackled has been as timely as the Pulse nightclub shooting in Orlando. On Monday, August 15, the network will air a special titled True Life: We Are Orlando , a tribute to the victims and survivors of that terrible tragedy. It's a powerful hour of television, but what really makes the episode resonate is the way it illustrates the many different ways people grieve.

Although the act of terrorism specifically targeted the gay community, the violence impacted a wide cross-section of people: gay, straight, male, female, white, and black — and especially Latin American. (It was Latin night at Pulse that evening.) To represent this, MTV's We Are Orlando focuses on the road to recovery for four very different survivors: Tony Marrero, Joshua McGill, Tiara Parker, and Patience Carter, who were all at Pulse when the shooting occurred. Even though they went through the same unimaginable ordeal, they each had a wildly different experience… and went on wildly different journeys towards recovery.

Trauma is not a competition. None of these people's accounts are "worse" than the others, and none of them are more — or less — deserving of sympathy.

Marrero was shot four times during the attack, including once in the back. That wound in particular still lingers as a constant and painful physical reminder of the night that changed his life forever. He continues to struggle with the guilt of crawling out of Pulse at the police's urging, while leaving other club-goers too injured to move — like Angel Colon — behind.

McGill was fortunate enough to escape from Pulse unscathed; physically, at least. Although he wasn't shot, his emotional wounds are no less raw, as he spent the the night caring for wounded bartender Rodney Sumter; paramedics instructed McGill to lie in the ambulance with Sumter on top of him, stanching the blood from the bullet holes in the stranger's back with his own body.

Parker and Carter both suffered bodily harm — Parker was shot in the stomach, Carter's femur was shattered by a bullet — but they're also both haunted by the memory of Parker's 18-year-old cousin, Akyra Murray, the youngest person to die that night. Although Carter and Murray both made it out of the club as soon as the shooting started, they soon realized Parker was still inside. They rushed back inside to find her, and the three girls soon found themselves held hostage by the shooter in the bathroom for three hours until police blew a hole in the wall and him out. Parker and Carter both survived; Murray did not.

Scars from a tragedy like this can be emotional as well as physical; the guilt of leaving someone behind or making it out unharmed can take as long to heal as a bullet wound. Trauma is not a competition. None of these people's accounts are "worse" than the others, and none of them are more — or less — deserving of understanding and sympathy. And the same holds true of the dozens of other people who made it out of Pulse alive that night. True Life: We Are Orlando's biggest success is treating all four of the survivors' ordeals with equal weight.

If Marrero, McGill, Parker, and Carter all have vastly different experiences of the shooting, the same certainly goes for their methods of coping. Marrero finds closure in returning to Pulse and visiting the memorial to his best friend, Luis Vielma. He also contacts and apologizes to Colon for leaving him behind. (After Marrero crawled out of the club, the shooter returned to where he had been lying and shot the already-injured victims again to ensure they were dead; Colon was hit two more times, but managed to survive.)

Coping with survivor's guilt, McGill had been experiencing night terrors ever since the shooting. He found himself unable to move on, not knowing if the stranger he'd held so tightly for so long had lived or not. After a Facebook post of his went viral, McGill learned the good news: Sumter, a father of two, had survived. McGill reached out to Sumter, and the two young men bonded over their shared experience.

Moving on has been harder for Parker and Carter, who were left without closure when the hospital would not release Murray's official cause of death until after the investigation was complete. (Parker also had to contend with accusations of being a "crisis actress" after she delivered a press conference about her ordeal from her hospital bed.) Although the friends take a step towards recovery by deciding to attend therapy together, the episode frustratingly ends with Murray's fate still a mystery.

If none of these peoples' experiences were "worse," then likewise, none of their approaches to healing are necessarily "better" than the rest. Surgery, medication, therapy, reaching out to fellow survivors, returning to the scene of the crime; any person could find all of these tactics helpful — or none of them. Healing is such a personal process, there's no way to qualify which is the "right" or "wrong" way to go about it and this episode of True Life makes that fact abundantly clear. Survivors of any sort of tragedy should feel able to reach out for help in whatever form that help might take, without fear of being judged.

That's how four different people can survive the same tragedy, yet emerge with completely different wounds, manifestations of grief, coping mechanisms, and roads to recovery.

We are fortunate enough to live in an incredibly diverse country. The citizens of this nation — just like the innocent victims of the Pulse shooting — represent many races, creeds, sexualities, genders, shapes, and sizes. But we're not homogeneous categories of people, either; we're not "just" black or white, gay or straight, men or women. Even within each distinct subset of the population, we remain unimaginably diverse in our thoughts, our emotions, our hopes, our fears, our weaknesses, our strengths, and our healing processes. That's how four different people can survive the same tragedy, yet emerge with completely different wounds, manifestations of grief, coping mechanisms, and roads to recovery.

But while our exterior differences are often used to divide us and alienate one group from another, our interior differences are what should unite us. It can be easy to forget while you're wrapped up in your own personal struggles, but no matter what anyone looks like on the outside, where their family comes from, or who they fall in love with, everyone's inner life is just as vivid and complex as your own. If even one person is moved closer to empathy by hearing the stories of Marrero, McGill, Parker, and Carter, True Life: We Are Orlando will have been a success. As difficult as stories like these can be to tell and to listen to, that's why it's so important that we keep sharing them.