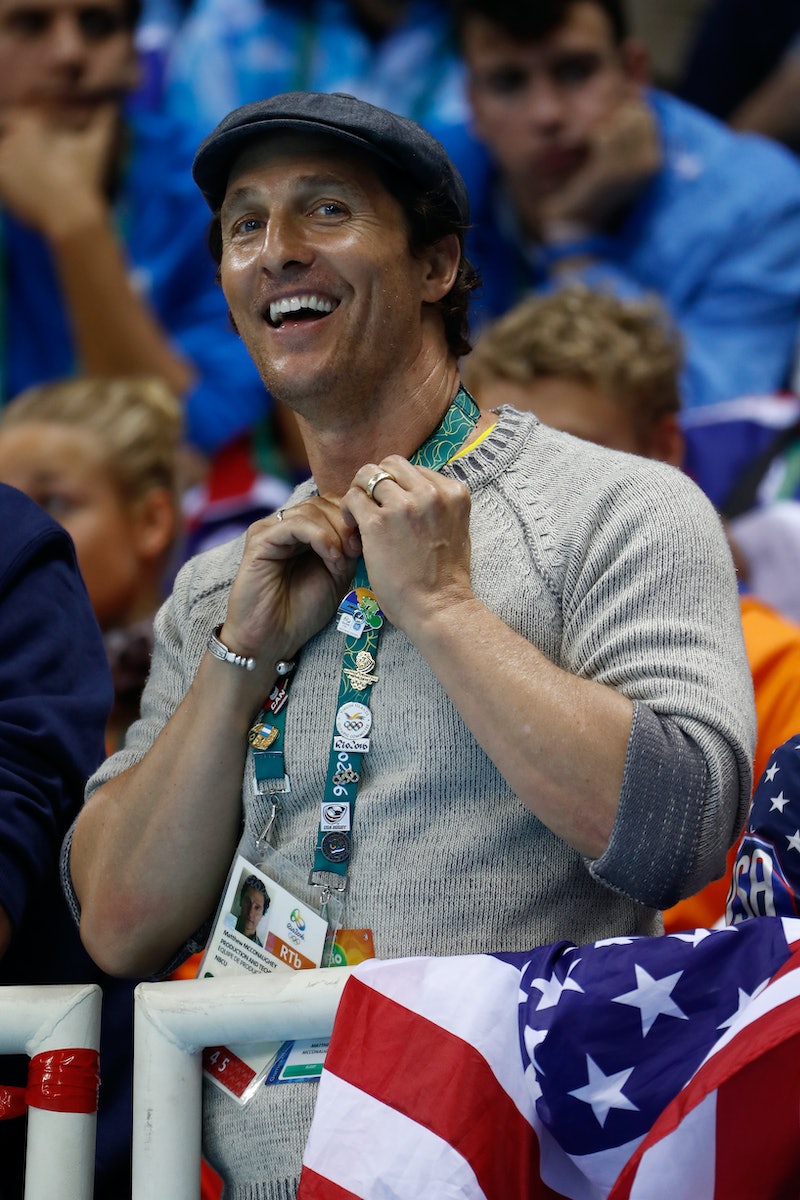 For a competition that celebrates supreme sporting accomplishments from world's greatest athletes, the Olympics sure is a whole lot of fun to watch while doing very little else from the comfort of your own home. I'm talking couch, friends, snacks, wine, and a tons of coffee — the whole lazy nine yards, people. Watching the Olympics can bring with it an absolute roller coaster of emotions, too, driving the gamut all the way from excited to tense to victorious to disappointed and even to totally patriotic. And there's one definitive celebrity fan of the 2016 Olympics in Rio who's definitely been experiencing those emotions: Matthew McConaughey has been watching the Olympics from the stands, and his reactions to the competitions have been priceless.

Attending the 2016 Olympics with his wife, Brazilian-born Camila Alves (who is acting as a lifestyle correspondent for E! and NBC's coverage of the Rio Olympics), McConaughey is the embodiment of a man who is embracing the opportunity to support his country and to have a whole lotta fun while doing so.

1. When Watching Athletes Being Powerful And Supreme Superstars Makes You Super Hungry

But you still make your roommate go to the kitchen to grab that second bag of chips for you. Because physical activity of any sort is more fun to watch than to actually do. In fact, just pile a handful into my mouth for me, Susan, I'm too busy tweeting.

2. When You Try And Control The Outcome Of An Event From Your Couch

Screaming encouragement at your TV is one thing, but actually believing that it's going to make a blind bit of difference is something else entirely. It's time to sit back down and take a break, yo.

3. When You Make A Personal Connection To The Athletes And Feel Like You Know Them

And you stop referring to Michael Phelps as being anything other than, "my Olympic hubby."

4. When You Wake Up Far Too Early And Buzzed For The Swimming But Have To Wait Around

Nah, it's fine. Just let me make myself comfortable on the couch here and kill some time for the next three hours. Totally cool, guys.

5. When You Celebrate A Team USA Victory By Taking A Group Selfie

Nothing screams, "We're number one!" like you and your besties, slightly tipsy off white wine, snuggled in on a triumphant pose of glory.

6. When You've Had Too Much Coffee And Discover That Table Tennis Is The Best Thing Ever

You're only three cups in and that ball definitely warrants your very own homemade sound effects for whenever it gets hit. Your friends totally appreciate it. You're nailing this Olympics jig.

7. When You're Slightly Hungover And Get Emotional When The National Anthem Gets Played

And find yourself whispering, "It's just so beautiful. These guys are national heroes..."

8. When Your Mom Calls You In The Middle Of A Final

Seriously, I love you and everything, but now is not the time.

9. When You See A Totally Gnarly Gymnastics Move And Have To Show Some Respect

Like, seriously, what is this majestic physical sorcery? Can all bodies do that? Can mine? Move the coffee table out of the way, Susan, I'm going to find out.

10. When Your Date Comes Over To Watch The Boxing Events And You Try And Play It Cool

But inside you're secretly screaming support, flinching in horror, and frantically objecting to the referee's decisions.

11. When You're The Only One Of Your Friends Who Just Can't Get Excited For Soccer

It's fine, you guys. Go ahead and cheer, I totally know what's happening, am having a super great time and don't feel left out in the slightest.

12. When Team USA Doesn't Win A Single Medal During An Event But You're Definitely Not Sulking

Nope, totally accepting this in a mature, grown up manner. In complete, miserable silence. While scowling at the TV.

13. When Team USA Wins A Medal And You Immediately Lose Your Damn Mind

Whether you consider yourself to be much of a dancer or not is completely besides the point. Impulsively, your body tells you to stand up, bust some victory moves, and jump up on down on the spot while shrieking for a solid minute.

14. When You Crack A Joke About Someone's Name But Nobody Gets The Reference

Seriously, guys. Regina George — like, that's a character from the film Mean Girls? And she's also a British sprinter running in this race? Oh, come on, it was funny. You're all totally not being fetch right now.

To further go and complete your Olympic viewing journey in a manner which would make McConaughey proud, I strongly recommend shouting "Alright, alright, alright..." at your screen whenever something great happens and emulating any one of his Magic Mike dances whenever Team USA wins a medal.