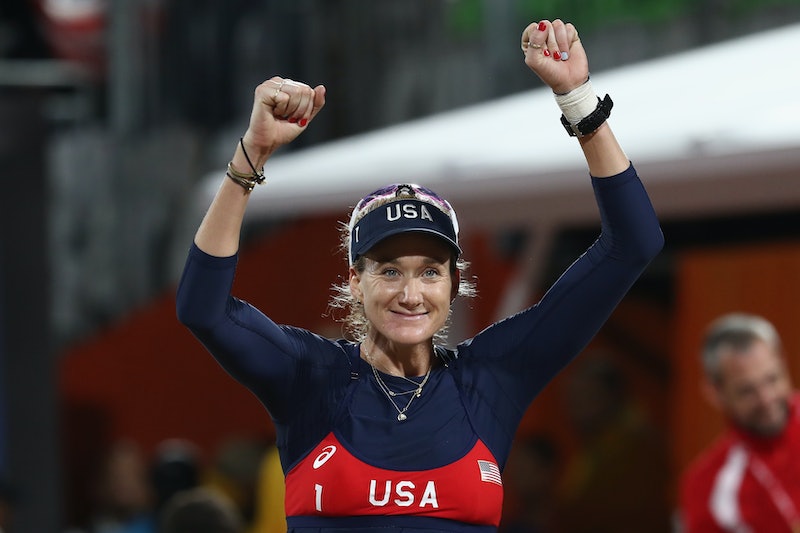 Fans of Team USA's beach volleyball are familiar with player Kerri Walsh Jennings, but even her most avid supporters might not know the following: just how Jennings stays inspired during the Olympic games. Her motivation comes from a lot of places, but one in particular has to do with three powerful letters: J-O-Y. It appears that when she plays in a volleyball match, Jennings writes "Joy" on her hand.

This Olympics is particularly significant for Jennings, as she finds herself without her previous partner, Misty May-Treanor. Instead, she's playing alongside 2012's silver-winning competitor April Ross. Here's the story on how that came to be, in case you're not familiar: In their last final together at the 2012 London Games, Jennings and May-Treanor won their third straight gold medal and, in the process, beat Ross and Jennifer Kessy. According to the New York Times, immediately following the win, plans for Rio were made between Jennings and Ross. Ross explained, “At the net, she [Jennings] said, ‘Let’s go win gold in Rio. We hadn’t had that conversation. I was caught off-guard, but it was a no-brainer for me. I was like, ‘Yeah, for sure.’”

May-Treanor has since retired from volleyball, and now Jennings and April Ross are looking to take home that Olympic gold. This puts Jennings in a position to become the second female American to win team gold in four consecutive Olympics. It's a lot of pressure, but Jennings is handling it like a boss. Perhaps because she's able to constantly remind herself of the one thing that matters — the "joy" in the game.

As for the reasoning behind writing it on her hand? Jennings said, "I write this joy on my hand because I want to play like a kid out there. I want to have fun, I want to be playful. I want to bring joy to everything I do because when I do that I play better." It's definitely a smart, sweet way to remind herself of all those things. Plus, it seems to be working: Jennings and Ross are off to a strong start and it doesn't look like the two are slowing down anytime soon.

Olympic gold medalists or not, I think we can all take a page from Jennings' playbook and try to remember the joy.