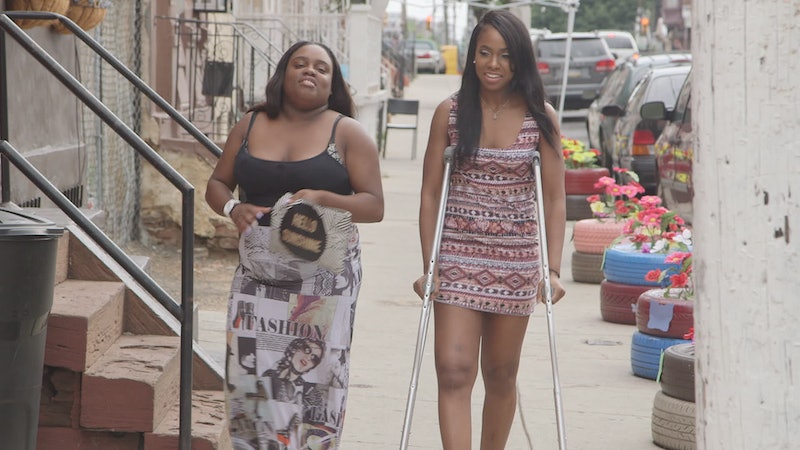 Most of us can't imagine experiencing a tragedy like the one that took place on June 12, when an armed man shot and killed 49 people in Orlando's Pulse nightclub, in the worst mass shooting in United States history. We can't imagine what it would be like to survive while your 18-year-old cousin lost her life. We certainly can't even begin to imagine what it would be like to live through such an event, only to receive death threats from conspiracy theorists accusing you of being a "crisis actress." Yet that's exactly what Philadelphia residents Patience Carter and Tiara Parker went through after their Florida vacation went horribly wrong two months ago — and now they're sharing their story on MTV's special presentation of True Life: We Are Orlando .

"After I did my press conference, I started to see a lot of negative things regarding the entire shooting itself, regarding my response, regarding my story in general," Carter tells Bustle about the emotional interview she gave from her Florida hospital room two days after the shooting. "People were calling me an actress, a liar, they put up videos discrediting everything I was saying, saying I wasn't even really there. All of this was going on while I was still in my hospital bed. Then it continued after I got home. I was harassed on social media. Someone even DM'ed me a couple of weeks ago saying, 'You’re an actress and I should kill you.'"

Parker, who hasn't been as severely targeted as Carter but has still been caught up in the attacks against her friend, cites these conspiracy theorists as the reason they decided to participate in the episode. "There's not enough money in the world," she says to those who accuse her and Carter of being hired to fake their grief. (Rich Ferraro, the Senior Director of Communications & Public Affairs at MTV Networks, made it clear to Bustle that MTV does not pay subjects to appear on True Life.) "I wanted people to understand the real truth of what’s going on," Parker continues. "I am not a liar."

"Sometimes when you see things on the news, or you read things in headlines, you feel very unattached from it. You don't feel like it could ever happen to you," Carter acknowledges. "But when I saw that MTV was doing a True Life on the survivors and their lives after, I wanted people to see that this wasn't a joke, it wasn't a game, this wasn't a conspiracy. This was real people who were really affected by something tragic that happened. It wasn't scripted or planned at all."

Carter says she hopes that watching her try to get around on crutches — her femur was shattered by a bullet — and the sight of Parker's raw grief surrounding the death of her younger cousin, Akyra Murray, will force their doubters to admit they were wrong.

But Carter also learned a lot while dealing with this tragedy and has words of advice for any going through a difficult time of their own. She tells Bustle:

"I would definitely tell them — and this is something I learned about myself — I can hide or really separate myself from people when I'm hurting or when I'm going through something. But for a situation like this, it's very, very, very important to be around people who understand your pain and people who are there to support you, love you, care about you. Don't feel like you can't talk to anybody. Don't feel like you have to be in a corner by yourself, because people do want to help you, especially your family. Take advantage of being around those people to give you that light that you need instead of being by yourself."

Moving on has been difficult for the two young women, especially since the authorities would not reveal Murray's official cause of death — even to her immediate family — until the entire investigation had been complete. In this regard, True Life ends with a frustrating lack of closure, as Murray's fate remains a mystery when the episode ends. Now Parker reveals that since filming the episode, they have finally learned how her cousin died — in addition to being shot in the arm, which her family was aware of, Murray sustained additional gunshot wounds, including a fatal gunshot to her neck. But receiving this information came as a mixed blessing. "It did give me closure, but it didn’t give me the peace I was looking for," she says. "There are still things I want to figure out."

Ultimately, Carter just wants people to understand what they went through on that horrible night two months ago. "After seeing this [episode] and the raw reality of it, hopefully people just become more compassionate. I hope that if they said anything horrible, they would apologize. I would feel vindicated. We don't have anything to prove," she clarifies. "It's just about living in our truth — and I hope people just understand what the truth is after the episode airs."