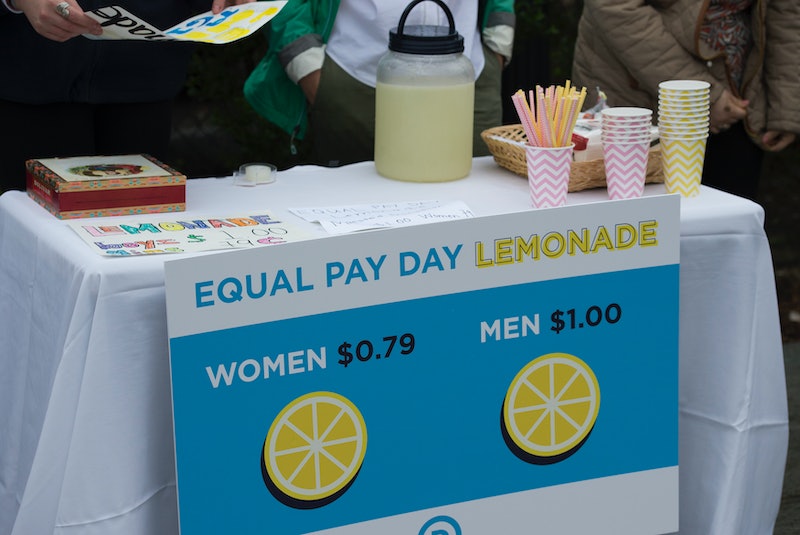 It's well-established that women make less than men throughout the United States (and in many other places in the world, too), but the wage gap actually varies a lot based on what part of the country you live in. In order to determine the best and worst cities for the wage gap, financial news site 24/7 Wall St. analyzed salary data for women as a percentage of men's earnings according to the U.S. Census Bureau's American Community Survey in the 100 biggest metropolitan areas in the United States — and the results are well worth considering. Some will depress you, while some may pleasantly surprise you... but not that pleasantly, because women still make less everywhere. Sigh.

While it's unclear why certain metropolitan areas have more equitable pay than others, 24/7 Wall Street thinks it could be for a somewhat disappointing reason: When pay is lower overall, there tends to be a lower wage gap, whereas when a city has lots of high-paying jobs, they tend to go disproportionately to men. So, some of the cities with the lowest wage gaps are actually just the ones with lower pay overall. Another possible contributor is the gap in educational attainment between men and women in certain cities. Nationally, more women than men are college-educated, but the pattern is the opposite in a few cities on the "worst cities" list.

No matter which way you look at it, the results are eye-opening — and certainly something to which we need to draw attention. Here are the five highest- and lowest-paying urban areas for women in the country, according to 24/7 Wall St.'s analysis. Head on over to their full report for more.

The Highest-Paying Cities For Women:

The Cape Coral-Fort Myers metropolitan area is known for its waterways — Cape Coral has more canals than any other city in the world — and, apparently for its highly paid women: Women make 93.6 percent of what men do there. Women health technologists and technicians and those in business and financial services actually make more than men.

Durham and Chapel Hill, NC are part of the Research Triangle, which is known for its high concentration of universities and tech companies. Here, women architects and engineers earn $7,000 more than men on average, although they constitute only 19.7 percent of these professions.

Florida is killing it here. In the Deltona-Daytona Beach-Ormond Beach metro area, women make 90.2 percent of what men do. The wage gap in computer and mathematical professions in still pretty appalling, though: Women earn $38,750 a year on average while men earn over $70,000.

Beautiful, sunny places seem to be topping this list. Maybe the nice weather makes bosses want to be fair to their employees (if only it were that simple). Women in the LA metro area make almost 90 percent of what men do. That doesn't mean sexism in Hollywood isn't real, though — in fact, Los Angeles women in the arts and entertainment make 78 percent of what men do.

This city in California's Central Valley has the second-highest representation of women in architecture and engineering jobs, at 22 percent, and women in these professions make more than men. Overall, women make 87.8 percent of what men do.

The Lowest-Paying Cities For Women

Women make a measly 64.9 percent of what men earn in Baton Rouge, which has the largest gap in legal occupations, like the rest of the country. Women earn less in nearly every industry here, though.

The proportion of women in construction in the Ogden-Clearfield area is greater than the rest of the country, but they also make only $18,649 a year — less than 40 percent of what men earn.

Utah has made the worst-paying list three times. Only 28.7 percent of women there have a Bachelor's degree. Ogden-Clearfield and Provo-Orem are the only other major metro areas in the country where women are so much less educated than men.

More like this
What Is Megan Thee Stallion’s Net Worth? The Traumazine Hitmaker Isn’t Worried About A Budget
By Hugh McIntyre
Gemma Collins' Net Worth Is Only Going Up
By Catharina Cheung
What Is Brad Pitt’s Net Worth? The Bullet Train Star Now Makes 8 Figures Per Film
By Hugh McIntyre
Beyoncé & Madonna’s “Break My Soul” Remix Honors A Group Of Black Icons
By Stephanie Topacio Long
Get Even More From Bustle — Sign Up For The Newsletter