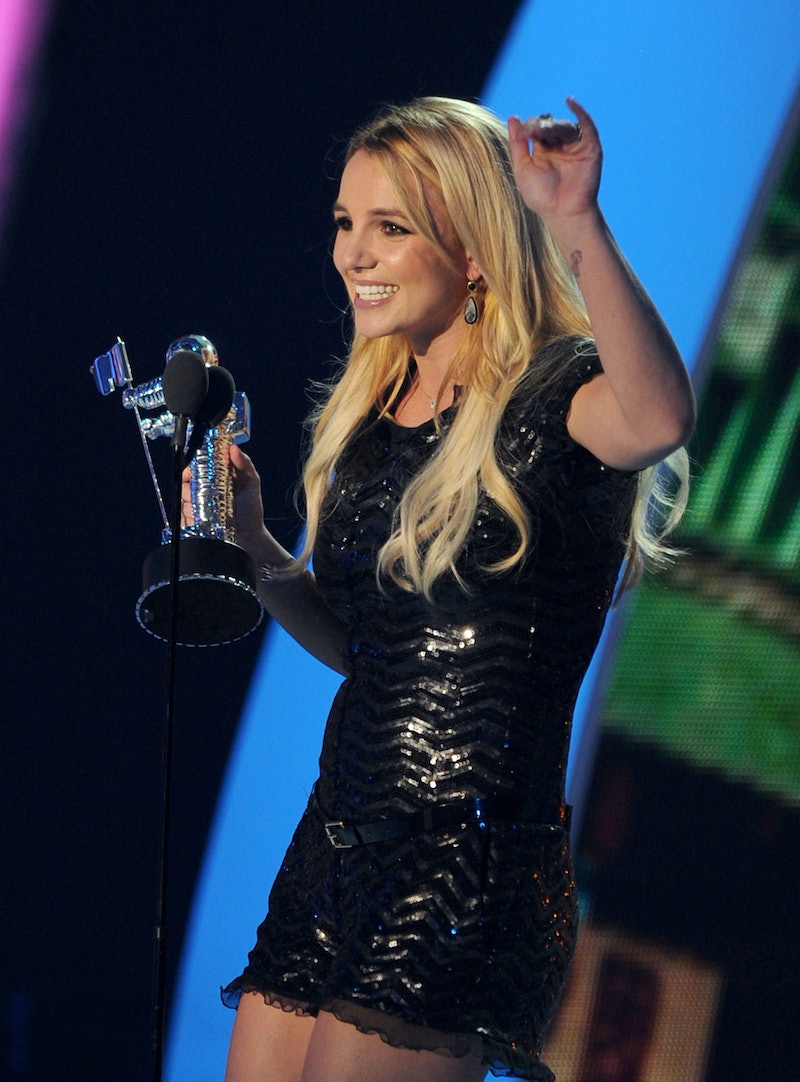 The odds of Godney adding a serpent to her Las Vegas residency are slim to none, so adjust your bets accordingly. Last Thursday, E! News' Marc Malkin visited Britney Spears on the set of the music video shoot for her upcoming single, “Make Me (Oooh)," and the two took a few seconds to wax nostalgic about the 2001 MTV Video Music Awards. Namely, the moment Spears danced with a gargantuan snake. And Spears called that iconic snake stunt "so dumb."

After Malkin said it’s been 15 years since a green bikini- and albino Burmese python-clad Spears sashayed out onto the VMAs stage and delivered an instantly legendary rendition of “I’m A Slave 4 U,” the Queen of Planet Hollywood shook her head and said, “Oh, goodness. It’s insane. Why did I do that?”

Malkin asked Brit Brit if she would ever again perform with a gigantic python, and she replied, “Hell no. It’s so dumb. No. Never.”

“I’m A Slave 4 U” at the VMAs will forever be one of the greatest award show moments to body roll its way onto the small screen, and that reptile is partly to thank. The second Spears draped the snake across her shoulders like a slithering shawl and then stomped and spun and strutted it all over that stage with ease, "I'm A Slave 4 U" secured a spot in the pantheon of important VMA performances.

It was also arguably one of the most suspenseful VMA performances.

Here’s an objective truth: Pythons are way cool. They’re like relatively chill, legless velociraptors that prefer hugging to pouncing. (OK, so maybe they aren't like velociraptors.) Here’s another objective truth: Pythons are way scary. Any breed of snake that can take down an gator is not to be messed with. (If you want to see some horrifying pictures, Google “python eats alligator,” but don’t say I didn’t warn you.) And Spears danced with one on stage. At a live awards show. Anything could've happened.

Do you know what else are way cool and way scary? Tigers. I might even argue that tigers are scarier than pythons. (Tigers and pythons are about the same level of cool.) (Is that a hot take? A paw-t take? Ugh, I’m sorry.) And as you probably recall, on the night of Sept. 6, 2001, the Holy Spearit was locked in a cage with a tiger. Because apparently, shimmying around with a mammoth reptile wasn't terrifying enough. How her heart didn't pound right out of her chest that night, I may never know.

If I ever meet Britney Spears (and don't pass out immediately), I will be sure to ask her that very Q.