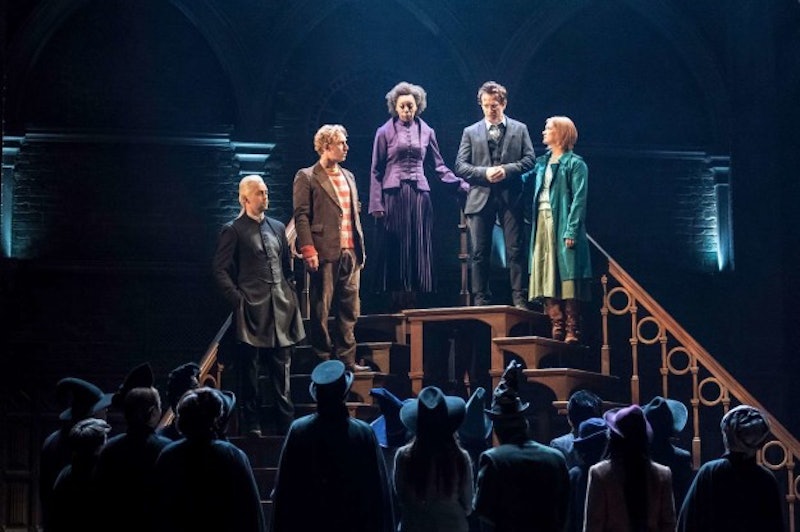 I spent my entire childhood sustained on two pillars of truth: my love of Harry Potter , and my love of dessert. I'm oft made fun of by my parents for tethering all my significant memories to what I was eating at the time, but it's true — over a decade and a half after the fact I can tell you I was drinking hot chocolate when Quirrell took off his turban. I was eating a pink frosted sugar cookie when Cedric died. I was finishing off Trader Joe's meringues when Harry went on his ALL CAPS ANGST SPREE the summer before his fifth year. I could go on, but you get the point: I'm a nerd and a dessert fiend, and have been since before I can remember.

But in the aftermath of Harry Potter and the Cursed Child , I struggle to reconcile those two identities. For while Albus and Scorpius were battling time, and Harry was battling his inner demons, there was yet another and arguably more important thing under siege: the Weasleys versus THE ENTIRE SACRED INSTITUTION OF DESSERT.

At first Harry Potter and the Cursed Child's war against dessert is subtle and insidious. We meet Scorpius on the train; he is enjoying some sweets and offers them to Albus and Rose.

We will come to find that the only shameless, staunch defender of sugar in this entire epic two-part work is one Astoria Greengrass, wife to Draco Malfoy — who also happens to get brutally offed by a blood curse. Coincidence? I think not. And look at this poor baby cinnamon roll Scorpius — already he has been conditioned by society to doubt his love for dessert, disavowing it faster than he disavows the fact that everyone thinks he's the secret time-traveling heir of Wizard Hitler.

If that doesn't just break your rotting, sugary heart, then Albus's next line will:

Let me get this straight: Ginny Weasley doesn't let her kids have sweets? Be still my Hufflepuff heart. The little sister of the very same boys who used to sneak into the kitchens and charm house elves into surrendering pumpkin pasties is raising her kids in a dessert-less world? Honestly, no wonder Albus had issues with his father. I'd have issues with anyone who sat back in cowardice and silently supported that kind of nonsense.

But wait, my friends. The tyranny of the adult Weasley clan knows no bounds. For not 20 pages later Hermione is talking to Harry in his office when this happens.

HERMIONE: Do you fancy a toffee? Don't tell Ron.

HARRY: You're changing the subject.

HERMIONE: I truly am. Toffee?

HARRY: Can't. We're off sugar at the moment. (Beat.) You know, you can get addicted to that stuff?

Also, "we're off sugar at the moment"? This is a kid who was locked in a closet and ate scraps for 11 years, and his wife — who grew up in a normal, magical household, where I assume they all know spells to prevent cavities and clogged arteries or whatever — has dictated that they're off sugar? No wonder he keeps having all these stress-induced nightmares about Voldy. Also, I'm sorry, old man version of Harry, but "you can get addicted to that stuff?" You faced and defeated the greatest of evils ever known to mankind. I think you'll be OK.

More to the point, though, while we were all distracted by Delphi and her murderous shenanigans, the true villains of this narrative revealed themselves: Ronald and Ginevra Weasley.

When you really squint, it all starts to make sense. The entirety of Cursed Child is not about repairing a crumbling father son relationship or the power of friendship, but rather to push the Weasleys' new anti-sugar agenda. Astoria Greengrass has a song about candy? Boom, dead of a blood curse (cough, diabetes). Scorpius pushes sweets on an unsuspecting Albus Severus Potter? Boom, their friendship gets torn apart. Hermione sneaks a toffee past Ron? BOOM, she turns into an inexplicably evil shrew in an alternate timeline. Trolley Witch serves candies to adorable children on the Hogwarts Express? BOOM, SHE IS A LITERAL IMMORTAL BANSHEE WITH CRAZY EYES AND CLAWS.

Call me a conspiracy theorist, but I suspect Ginny and Ron have been at it for much longer than Cursed Child would lead us to believe. How sure are we, for instance, that Snape was the one who killed Albus "All My Passwords Are Candy Because Lol What Is Security" Dumbledore? Maybe all of this, all of it, was secretly engineered by Ron and Ginny from their teenage years, when they started harboring a secret vendetta against dessert. We saw what happened to Ron when he ate those chocolates that had been tampered Romilda Vane's by love potion. He nearly died — and he never forgot it. So maybe his hatred for dessert festered until it consumed him, until it fanned out to include anyone who enjoyed it, until it channeled into a murderous, uncontrollable, sugar-free rage. And Ginny, ever the loyal sister she is, took up the mantle to fight by his side.

So they aligned themselves with influential people; Ron with the incredibly clever, powerful witch whose parents conveniently happened to be dentists, and Ginny with The Boy Who Lived Without Candy For Most Of His Miserable Life. And once their identities were secure, their true shenanigans were protected by the distraction of Voldemort's chaos. Their candy chicanery has gone under the radar for years.

BUT NO LONGER. For this is the day that I out them. This is the day that the whole world will know the truth, and the dessert people of this world will be avenged. Not just for our fallen dessert heroes Astoria Greengrass and Albus Dumbledore, but by all parties oppressed by the Weasleys' insidious reign. So raise your sugar-frothed butterbeer and hold on tight to your Fizzing Whizbees, my friends. Today we take the Wizarding World back, one Bertie Bott's Every Flavored Bean at a time.

More like this
Rupert Grint Just Shared A *Major* Update About Ron Weasley’s Future
By El Hunt
Netflix Shut Down 'Bridgerton' S3 Rumours About A “Very Dark” Storyline
By Bustle
Jessica Simpson On The Time She Was Pursued By A Backstreet Boy & An *NSYNC Member
By The Editors
Delia Cai’s Small-Town Romance Goes Beyond The Tropes
By Samantha Leach
Get Even More From Bustle — Sign Up For The Newsletter
From hair trends to relationship advice, our daily newsletter has everything you need to sound like a person who’s on TikTok, even if you aren’t.