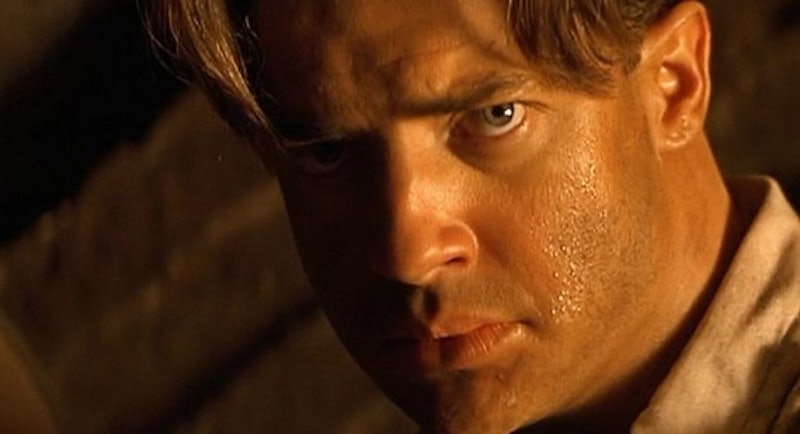 The '90s were a wild time. Cell phones were huge, hats were worn backwards, and Brendan Fraser was the world's biggest action star. That last bit was wholly a result of the 1999 blockbuster, The Mummy. And while giant cell phones and backwards hats have seen their renewed moments in the sun, Fraser's run as an action hero is stuck firmly in the past. The reason for that is likely due to the fact that The Mummy is the ultimate '90s action adventure film — and that's not necessarily a good thing.

Most '90s kids probably have memories of the film as a harmless and fun romp, but viewed through modern eyes, there are several aspects of the film that don't hold water. One major issue of the movie, and of many '90s films in general, is the way the female protagonist is handled. Rachel Weisz, in what essentially served as her introduction to a wide audience, plays Evie Carnahan, a bright Egyptologist who's frustratingly portrayed as a ditsy damsel for much of the film. She depends on men to save her over and over again, and can't help herself from falling in love with Fraser's character when he forcibly kisses her against her will. Thankfully, women on-screen often (although certainly not always) receive more thoughtful characterization these days, but hapless romantic damsels were still the industry norm in the '90s.

Not surprisingly for a movie set in the Middle East, there are also the expected racial stereotypes that go along with the territory. Generally speaking, the heroes of the film are white, while the villains are brown. This Hollywood tradition obviously predates the '90s, but by the turn of the 21st Century, casting agents began to (sometimes) show more sensitivity to this issue, albeit not in The Mummy. But the movie isn't all bad, of course. One other hallmark of '90s films, particularly action movies, is their less serious tone. In the post-9/11 world, many movies took on darker themes. The Bourne films, Christopher Nolan's Dark Knight trilogy, and the Marvel movies all have a sense of seriousness that permeates throughout; even during the lighter moments. The Mummy is pure mindless action with no sense of anything bigger (except audience's love of '90s heartthrob Fraser), and it's possible that films of its ilk won't be seen on the same scale again.

Bustle's '90s VHS-inspired podcast, Be Kind Rewind, discusses all moments in The Mummy — as well as the appeal (or lack thereof) of star Fraser — in the latest episode, which you can check out below.

The Mummy is without question a product of its time, and your sense of enjoying it through modern eyes will likely depend on how well you're able to distance its sense of silly fun from its outdated tropes.