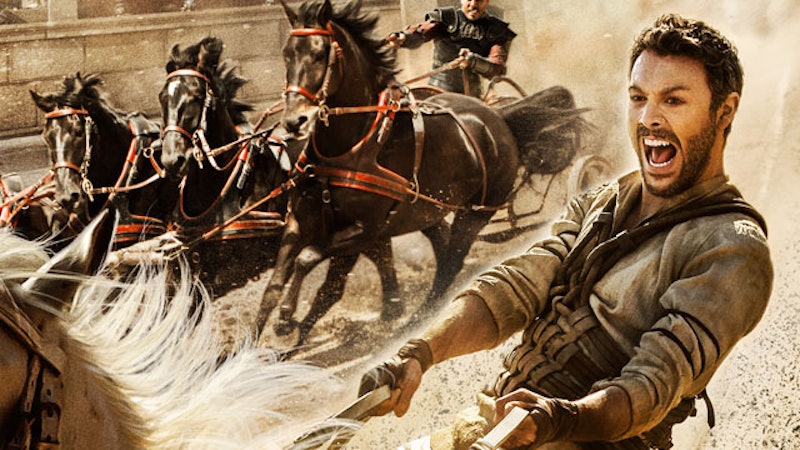 At first glance, the new film Ben-Hur is a curious beast. While obviously a reimagining of the 1959 classic film of the same name, its original roots are somewhat murkier. The movie tells the tale of Judah Ben-Hur, a Jewish prince from Jerusalem who is enslaved by the Romans after being betrayed by his adoptive brother Massala, a Roman officer. Oh, and Jesus also factors into the movie. So where did this story come from? Is Ben-Hur a true story, or perhaps based on the Bible? Or, is it simply historical fiction? The movie raises some big questions.

The new version is actually the fifth film to tell the story of Ben-Hur . There's a 2003 animated version, featuring 1959 star Charlton Heston as the voice of Ben-Hur, but even Heston's classic mid-century version wasn't the original telling. It was a remake of a 1925 silent film, which itself followed a 1907 silent short film. So where did the story begin? In a book, actually. Ben-Hur: A Tale of the Christ is an 1880 novel by American author Lew Wallace. And since it's a novel, that means the tale of Ben-Hur is 100 percent fiction, wholly created by Wallace. So what is Jesus doing in the story?

Ben-Hur is considered a Christian novel, perhaps the most influential one of all time. It uses the fictional character of Judah Ben-Hur to work as an allegory for Jesus' life. The two men are depicted as having existed at the same time, both Jews in Roman-occupied Israel, and their lives mirror each other. Much of the tale of Ben-Hur has to do with his journey toward revenge. After being falsely accused of a crime and enslaved, his family and possessions are also taken away from him — leaving him with nothing. He trains to become a charioteer, with vengeance against Massala on his mind. But his various run-ins with Jesus at important times in his quest cause him to change his outlook on life, culminating with him witnessing Jesus accepting his crucifixion and realizing that forgiveness is a more valuable asset than vengeance.

The book is one of the best-selling novels of all-time, selling an estimated 50 million copies in its history — more than classics like Gone With the Wind, To Kill a Mockingbird, and The Great Gatsby. It was the best-selling novel of the 19th Century, and also has the distinction of being the first work of fiction to ever have been blessed by a pope, Pope Leo XIII. Clearly, the book is not lacking for accolades, so it's no wonder Hollywood has come calling for a fifth time.