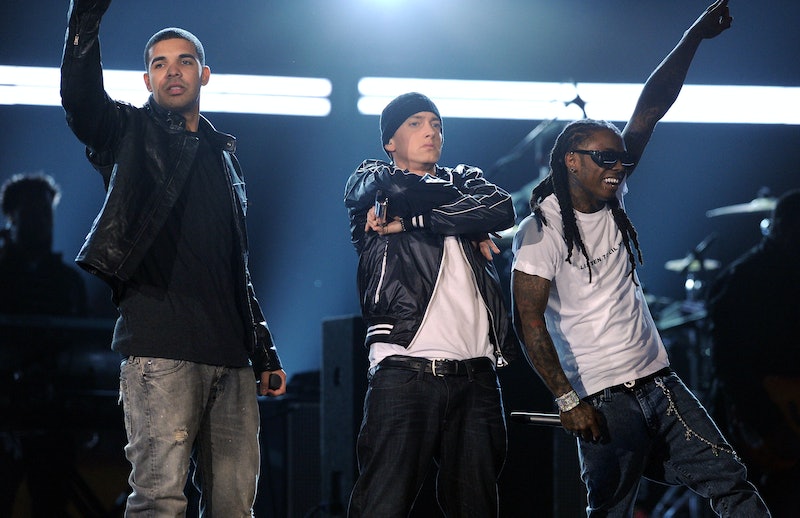 Forget the feud rumors. When Drake brought Eminem onstage in Detroit, it definitely suggested that these two are closer than ever. It's been a perturbing summer full of Drake and Eminem-centric rumors, seemingly invented out of thin air. After rapper Joe Budden (who is signed to Eminem's label) dissed Drake's latest album VIEWS on his podcast, Hot 97 radio host Ebro Darden weighed in and hinted that Drake had told him if Eminem got involved, he could give every bit as he got. Thankfully Darden admitted he was joking, but clearly Drake and Eminem felt their fans needed a little reassurance in the form of a surprise onstage collaboration together at Detroit’s Joe Louis Arena on Tuesday August 16.

Eminem appeared via a trap door in the center of the stage as Drake said “Make some noise for the greatest rapper to ever get on a microphone — he goes by the name of Eminem.” Eminem returned the complimentary tone, saying “It’s an honor to share the stage with this man right here.” The two performed a track they'd previously collaborated on, along with Kanye West and Lil Wayne, "Forever," off Lil Wayne's Da Drought 3. And thank goodness: because these two are made for each other, collaboratively speaking.

Sure, the tonality and lyrics of their music may be totally different, but Eminem and Drake share one key characteristic: no matter how outer-space level famous and successful they get, they both position themselves as consummate outsiders. We see this in the third track of Eminem's most recent release, the 2013 Marshall Mathers LP 2 , "Rhyme or Reason," in which he talks about the emotional devastation his lack of father had on him, but how that this same sadness is what fuels his lyrics and creativity:

Who's your daddy?...Has he taken any time to show you what you need to live?No, if he hadI wouldn't have ended up with these rhymes on my pad

No matter how many records Eminem sells, he'll still be an outsider, because he doesn't come from a nuclear family. We see this same pain in Views. Just as Eminem goes on to do later in the album on Marshall Mathers LP 2, Drake makes no bones about his success, on "Weston Road Flows," rapping "It's raining money, Oklahoma City Thunder, The most successful rapper 35 and under." But, even so, his material success doesn't seem to compensate for the emotional emptiness that seems to be demonstrated on tracks like "Keep The Family Close:"

All of my "let's just be friends" are friends I don't have anymore...Guess I should have tried to keep my family closerMuch closer

And perhaps that's exactly what's so compelling about Eminem and Drake: both tread a thin line between emotion and cynicism. They may sound cynical, but it seems to come from a place of vulnerability — they have to give the world with a lot of attitude, simply because they've been hurt so many times. This is showcased most clearly on "Asshole," another track from the Marshall Mathers LP 2:

Came to the world at a time when it was in need of a villainAn asshole, that role think I succeeded fulfillingBut don't think I ever stopped to think that I was speaking to childrenEverything was happening so fast, it was like I blinked — sold three millionThen it all went blank, all I remember is feelin' ridiculous cause I was getting sick of this feelin'Like I am always under attack, man, I could have stacked my sh*t list to the ceiling

Eminem is cynical about the role the press has assigned to him — he's not a true baddie, but a villain for hire. He's arguably happy to embrace the role since he excels at it and it means material success until he realizes the negative consequences. Unlike the role the press wants to assign to him, he does care about influencing kids negatively or speaking disrespectfully about women.

And perhaps this is the key to Drake and Eminem's success: despite the millions in record sales, the sold out tours, the new headlines every week, they position themselves as being relatable: Eminem's saying that, behind every superstar, there could be an absent father. Drake's saying, sure, I have the money and the reputation, but I haven't always been so lucky in love. It's a cliche, but one that works: by crafting their lyrics to accentuate the ways in which they're outsiders, they make us like them even more. So here's hoping this is just the beginning of more Eminem and Drake collaborations. Who makes sad boy rap more appealing and relatable than this pair?