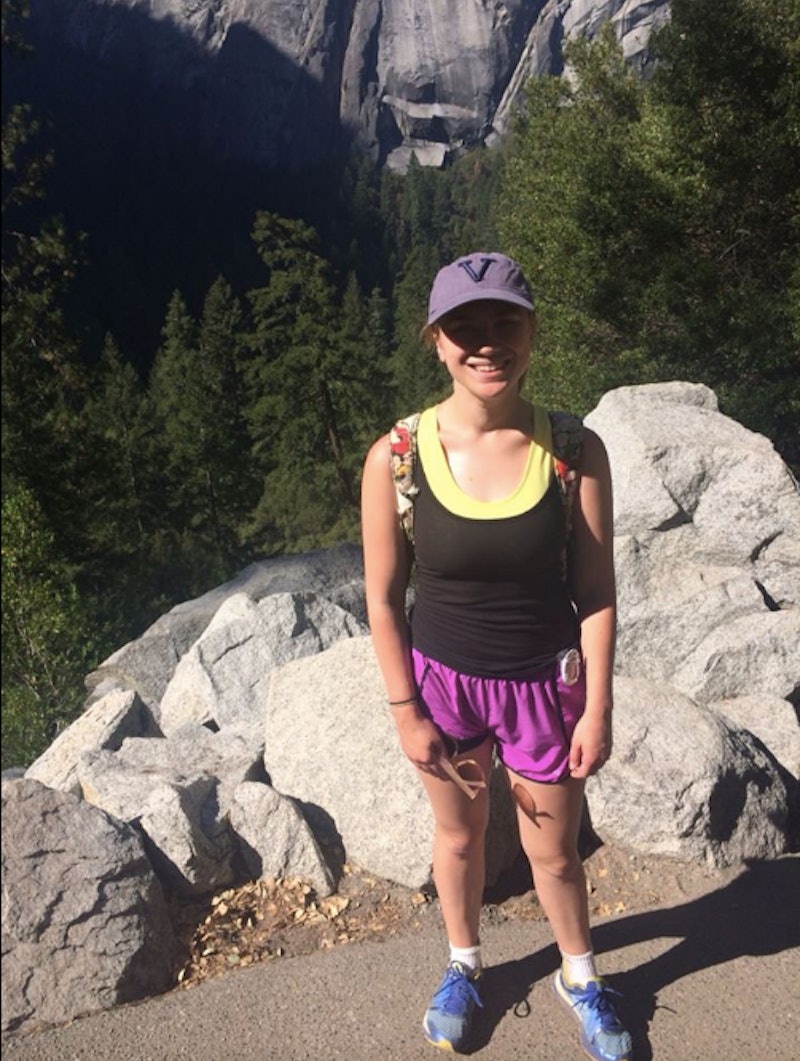 My mom taught me how to run. When I was nine, she took me out in the neighborhood and showed me how to hold my wrists and fingers like I was holding a potato chip, and how to breathe in through your nose and out through your mouth to get rid of side aches. When I was 12, she bought me an anti-skip CD Player and the Linkin Park album that essentially turned me from a casual runner to a Runner for Life. When I was in high school, she taught me everything I needed to know to survive the grueling August heat of cross-country practices and the cutthroat 5k races of October. All these years later, if I have a question about running, she is the first person I call, and the only person I trust.

But because I am a girl, she had to teach me other things. Like how if you're going to leave the house to run, always tell someone exactly where and for how long. Never run on the trails in the park without a buddy. Never run after dark. Never run without your phone. Every few months, she forwarded me some variation of the same article — the one that says that when rapists are looking for women who are easy to subdue, they look for women with long ponytails to grab, women who are alone, women who have clothes that are easy to take off. In other words, they look for runners. They look for me.

"Yeah, yeah," I'd say, begrudgingly listening to her — because back then, I didn't really know any better. I lived in a bubble where bad things generally didn't happen, in a neighborhood where most people knew me, where I ran in packs with a bunch of kids my age. I knew she wanted me to be safe; I just didn't see then how it applied to me.

But then there are swift and brutal reminders: I am a woman existing in a space by myself, and by that virtue alone, I am not safe.

This August, the reminders have been more brutal than ever. As Gabrielle Paiella of The Cut pointed out last week, in less than a month, three female runners have been murdered — three female runners who were following all of the "rules". They told people where they were going. They went out in broad daylight, in public spaces. All the questions people ask when they're getting ready to victim-blame — What time was it? Why was she running there? What was she wearing? — those boxes were checked. Karina Vetrano was strangled to death in Queens on an evening run in a bike path on August 2. Alexandra "Ally" Bruege was shot in Michigan on a mid-afternoon run in her neighborhood in Michigan on July 30. Vanessa Marcotte was found dead and partially burned after a mid-afternoon jog a mile from her mother's home in Massachusetts on August 7. And despite the incidents being public and in daylight, none seem to have any witnesses, and none of the perpetrators have been caught.

Fitness blogger Erin Bailey wrote an incredibly timely post on her blog about the casual, everyday sexual harassment female runners face, under the assumption that women "deserve" it for wearing workout clothes and for being alone and vulnerable in open spaces. She describes in detail several recent incidents in which people leered, made awful comments, or even followed her. All of the spaces were public — it was the park, it was a convenience store, it was the gym where she worked out. It was always a place where someone could easily call the harassment "harmless," a place she would be expected to brush it off.

It was also always a place where someone could step in and discourage the harassment, but that is the other thread that all of these stories have in common: Nobody ever does.

Bailey's story is not unique. It happens to me. It happens to all women, regardless of whether we run or not. It's that moment when you change direction because someone or something makes you uneasy. That moment you pretend you can't hear someone making a suggestive or threatening comment through your headphones because it's safer not to engage. That moment someone grossly violates your space and you're desperate to make eye contact with someone, anyone, to make sure you're not alone in the experience, but nobody seems to care.

Bailey's post, whether she intended it to be or not, was not just about that everyday kind of harassment. Her post was about the murder of those three innocent women. Her post was about the little "harmless" behaviors which we accept as an inevitability and which society essentially ignores — and in doing so, allows for those behaviors to create a culture where women are taught live in fear. Where mothers have to warn their daughters of all the unfair ways they can be hurt for doing something that they love. Where women like Alexandra Bruege, Karina Vetrano, and Vanessa Marcotte are murdered, and people have the audacity to be shocked by it — when most women, and certainly any woman who has ever gone running by herself, believed the grim truth of their stories in an instant.

So yes, I am "one of those people" who post about their workouts a lot on social media. Every morning, I wait for the sun to rise so I can go for a run, and you can bet your bottom dollar there will be some hastily-snapped picture of the reservoir in the park, or some random statue or cityscape. I keep it light and funny, because that's what Snapchat and Instagram Stories are for. But for female runners, it's so much more than that. It's not just a pretty sunrise or a humblebrag or a time stamp on my shoes. It's a trail of bread crumbs. It's a quiet, ritualistic plea to the universe: If something happens to me, the 30 people who saw this Snapchat know where I am. If something happens to me, I won't be all the way gone.

When you look at the places I run — how crowded they are with other runners, how public, how safe — you might think I'm being paranoid. You might think I'm being absurd. But time and time again, we are reminded that the danger is all too real. And as long as we are determined to brush it under the rug and convince women they're being paranoid or absurd, the longer we allow a world where those bad, unthinkable things happen.

"We deserve to run outside," wrote Bailey. A simple plea. A ridiculous one, really. But a necessary one nonetheless. "We deserve more. A whole lot more."

I will never stop running. It is such an integral part of my identity — the force that grounds me, the root of my happiness, the only time I feel really, truly in touch with who I am. When my mom taught me to run, she gave me the best gift of my life. I want so badly to believe that some day I will be able to give that gift to a daughter of my own. I just wish harder than I have wished for anything that it didn't come with so many terrible strings attached.

More like this
Charlene White & MPs Lead Tributes For Bristol Bus Boycott Organiser Roy Hackett
By Sam Ramsden
Your Daily Horoscope For August 12, 2022
By Mecca Woods
25 Things I've Reduced My Life To, In Addition To WFH In My PJs
By Ginny Hogan
The Spiritual Meaning Of The August 2022 New Moon
By Nina Kahn
Get Even More From Bustle — Sign Up For The Newsletter