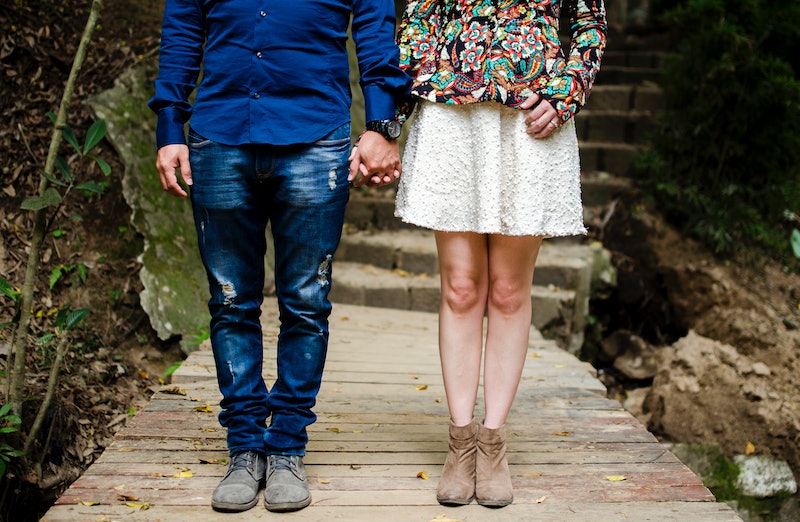 If you're in a relationship, then you know how weird coupledom can get. You and your SO probably finish each other's sentences, read each other's minds, and laugh at bizarre inside jokes. But there are some weird things that people do in relationships that are decidedly less endearing. Some can even be considered bad habits, and should be avoided at all costs.

I'm talking about the less-than-healthy quirks that start off innocently, and then quickly get out of hand. Maybe you guys spend too much time together, dole out unwanted advice, or ignore each other in your apartment at night. These things don't seem like a big deal, but I'm sure you can see how they might not lead to the happiest of unions.

That's why it's worth noticing such habits before they become a problem. If you do, it usually only takes a few simple changes and the situation can be remedied. Take your bad habit of ignoring each other, for example. Simply putting down your phone can do the trick. (Shocking, I know.) Or, if you spend too much time together, chatting about ways to free up your schedules can definitely help.

So, do you think you and your partner have crossed over into unhealthy territory? Then check out some of the signs below.

If you snore, or work wildly different schedules, then sleeping separately might be just what you both need. But some couples find themselves sleeping in different rooms for no good reason, and people definitely have opinions about that. "Many people feel very strongly about a couple sleeping together, and that sleeping apart creates distance and a lack of intimacy," says Nicole Martinez, Psy.D., LCPC, in an email to Bustle. Do whatever suits your relationship best, but keep this in mind the next time you sneak off to the couch. If sleeping in separate beds works for you and doesn't change the level of intimacy in the relationship for the worse, then that works, too.

2. Engaging In Copious Amounts Of PDA

I know, you're in love and can't keep your mitts off each other. But sometimes excessive PDA can be too much of a good thing. As relationship expert Zahra Barnes pointed out on Glamour, "Sometimes PDA can seem forced, and then it's like, the lady doth protest too much. You know?" In other words, it can seem like you two are compensating for something.

Everyone knows (or is) that one couple who is completely inseparable. And while it's kind of adorable, it's not exactly the most healthy thing in the world. "The goal ... is to find a balance in which both members of the couple are happy with the time they spend together, maintain their outside friendships and family relationships, make progress towards their professional goals, and give the relationship a chance to flourish," said Theresa E. DiDonato, Ph.D., on Psychology Today. So make sure you strike out on your own from time to time, for the sake of your relationship.

On the flip side is the couple who spends too much time apart."Couples will bring this up and feel like their partner does not want them to be part of their lives, and it creates some very hurt feelings," Martinez says. Try to find that happy balance between solo activities and date nights.

Yes, you guys probably have bills to pay and an apartment to look after. But that doesn't mean you should forsake fun, or refuse to joke around. Not only is this incredibly boring, but research shows that laughing together may be just the boost your relationship needs, according to Susan Krauss Whitbourne, Ph.D., on Psychology Today.

An argument-free life might seem ideal. And yet, when you really think about it, it's actually kind of creepy. "When you fight with someone, it shows how comfortable you are with that person," said dating expert Gigi Engle on EliteDaily.com. "When you can tell your partner that you disagree ... that’s love." So have at it, and say your piece. It's the right thing to do.

7. Not Sharing Meals Together

When was the last time you and your SO sat down at that Ikea table you helped each other build? If the answer is never, consider it an odd habit — and one that isn't good for your relationship. Couples should find the time to share a meal together, according to Whitbourne, as it helps with communication and togetherness. All good things.

8. Having Fights In Public

When you're totally engrossed in a disagreement, it can be difficult to tone things down when out in public. But despite being incredibly disturbing for innocent bystanders, fighting in public with your partner can be pretty disrespectful. So keep your disagreements behind closed doors, for everyone's sake.

As the relationship gets comfy, you might stop snuggling each other and instead start cuddling up with your phone. While it's totally normal, it's still most definitely weird, and really bad for your relationship. According to Whitbourne, when you focus more on your technology than you do on each other, communication can fall by the wayside. And that's not a good thing.

10. Waiting For The Other To Start The Romance

Even if your partner is usually the one who initiates sex, don't be afraid to switch things up. "Holding on to the idea that you need to be approached first by your partner for sex — or any other form of affection — will leave you waiting and unsatisfied," said Love and Sex Writer Ashley Papa on StyleCaster.com.

11. Making Decisions For Each Other

Again, there's a fine line here between being super cute and being oddly controlling. If your SO orders your food, or you tell them what to wear, think twice. While you can help each other out, and come to compromises, you shouldn't have total control over each other's lives.

As with most things, there is a healthy balance. Make sure that you and your partner keep things far, and you'll hopefully avoid all of these weird relationship habits.