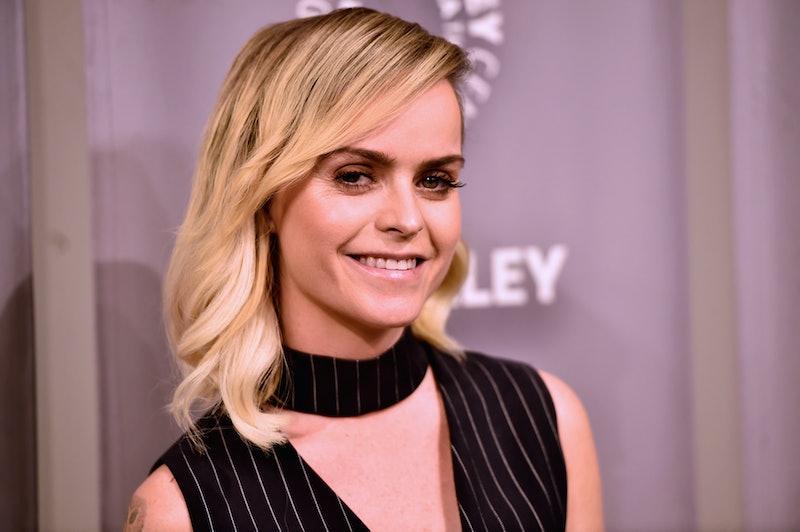 If your day job is playing a character who's imprisoned for murder, has survived a rape, and has a rep for being a racist, discriminatory bigot, it'd make perfect sense if you'd only want to choose other roles that were, well, a lot less disturbing. Yet it seems that for Taryn Manning, portraying Tiffany "Pennsatucky" Doggett on Orange is the New Black for five seasons and counting has actually made her more inclined to take on heavy roles — because she knows she's capable of handling whatever dark subject matter happens to come her way.

"Most artists, whether musicians or actors or painters or poets, there’s this depth of sadness, but with that comes this ironic take on life," Manning tells Bustle. "So I think that’s a part of me, finding the lightheartedness in such a dark world. I feel like that’s my life a little bit, with the things I’ve been through."

Manning, who's publicly discussed the tumultuous life circumstances she experienced before finding acting fame in the early 2000s, has certainly seen her share of struggle, as have many of her characters, from Nola in Hustle & Flow to Tucky on OITNB. Yet her role in the new film A Light Beneath Their Feet, available now, might be one of her darkest yet. As Gloria, a woman dealing with bipolar disorder, Manning delves deep into her character's psyche, affectingly portraying both the mania Gloria experiences and the depression she falls into when off her meds. Although Manning says she was surprised to be chosen for the role (partly because the 37-year-old plays the mom of a high school senior), she gets why she'd be seen as the right person to channel her character's complicated energy.

"I think people infer a freedom in me that I definitely have," she says. "I have what I like to call an 'astronaut ego.' So it’s like basically, in real life, I’m very shy. I’m actually really, really shy, and kind of quiet and reserved. But when the cameras start, I don’t know, it’s like something comes over me."

Still, Manning says that she was "nervous" to play a character with bipolar disorder, and so she did extensive research — FaceTime-ing with people with the illness, reading as many books on the subject as possible — to prepare. She found herself moved by their stories, unnerved by the statistics (bipolar disorder affects about 2.6 percent of U.S. adults, according to Depression and Bipolar Support Alliance) and what they were willing to share. "It might sound kind of weird, and I don’t know if it’s the right thing to say, but it’s like they’re proud," Manning says. "They’re proud because if they’re in a good place, it means that they’re taking good care of themselves, and it’s an achievement. And to see just the joy of that, you see it in their eyes... they’ll go into some of their darkest hours, and I’m just flabbergasted."

Manning says she hopes that A Light Beneath Their Feet helps increase awareness of bipolar disorder ("We can try to not make it such a stigma," she says), and with recent efforts like Demi Lovato's Democratic National Convention speech and other stars like Cara Delevingne opening up about their own mental health struggles, perhaps the shame around all mental illness will begin to lessen in time.