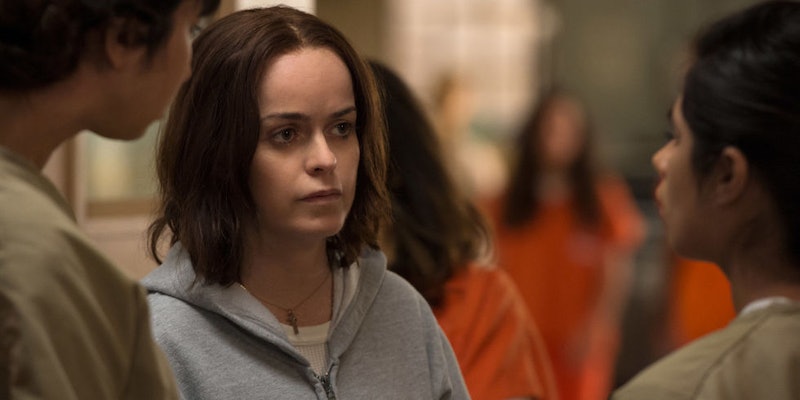 When a show's season ends with the (spoiler alert!) surprise death of one of its most beloved characters, it can be easy for everything else that happened during those episodes to get overshadowed. Yet while Orange is the New Black 's decision to kill off Poussey (Samira Wiley) due to a horrific accident deservedly received massive attention, fans shouldn't forget about all the other major events that happened during Season 4 — including Pennsatucky (Taryn Manning) choosing to forgive her rapist. It's been a few months, now, since most fans watched the character confront C.O. Coates (James McMenamin), remind him of the assault, and, after some contemplation, accept his apology in order to move on with her life. It was a powerful and controversial few scenes, with fans, critics, and, now, Manning herself, weighing in with differing opinions on whether or not Pennsatucky forgiving Coates was right.

"I felt, to be honest, a little bit like, OK, we opened a can of worms, and now we’re just resolving it so quickly," Manning tells Bustle about the forgiveness plotline appearing on Season 4. Still, she adds that Pennsatucky's character, a person who clings to love and attention and has a history of poor decision making, made sense with the decision to let Coates back into her life, however despicable his behavior. "I think when you’re in that atmosphere, there’s not really a lot to hold onto," she explains. "It’s energy that’s focused on you, and you’re oxygenated just by the attention, poor attention or good attention. I hate to say it, but we’re all human in that way."

The idea of Pennsatucky choosing to deal with her sexual assault by confronting her rapist and accepting his apology certainly struck a chord with OITNB 's viewers, some of whom felt that it was eerily realistic, while others were angered over the turn of events. Manning says that when she first learned where Season 4 was going for the character, she was taken by surprise. "I always give it up to the writers — they’re very controversial in doing things," she says. "When I got this year's scripts, I was like, 'wow, OK, here we go.' They just hit us with these things."

Pennsatucky's journey this past season may have been unexpected, but it made for one of OITNB Season 4's most affecting plotlines. Ever since the character's tragic backstory and internal struggles were revealed early on in the series, Pennsatucky has become a fan favorite and her arc on the show has reflected a growing sense of self-awareness and acceptance for others. She's still far from perfect, but her friendship with Big Boo and slow disavowing of her former discriminatory ways have made her into one of OITNB's most sympathetic characters, and it was heartbreaking to see her in such pain after the assault. Thankfully, Manning promises that when Season 5 starts up next summer, Pennsatucky will largely be back to her outgoing, hyped-up self.

"She’s got a little bit of attitude again," Manning, who's in the midst of filming the new episodes, says." She’s kind of feeling boss, like, 'I got this, I’ve been through this...' She’s just a piece of work."

Fans still have many months until they can see this new version of Pennsatucky, unfortunately, but Manning promises it'll be worth the wait; the upcoming episodes are truly "special," she says, adding that "many interesting things" will be happening for Pennsatucky. Wherever OITNB chooses to go in Season 5, it'll certainly make for a compelling ride.