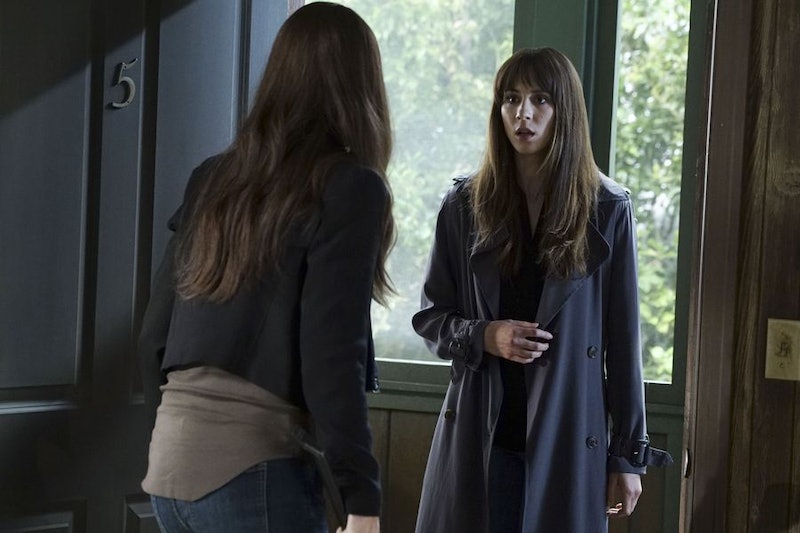 From the moment viewers first saw Mary Drake and Spencer interact on Pretty Little Liars , many of us were struck by their similarities and onscreen chemistry. Plus, it's hard to deny that the two bear a physical resemblance — I would argue that Spencer looks way more like Mary Drake than either Peter or Veronica Hastings. (Although there are certainly plenty of children who don't look much like either of their biological parents.) A recurring theme through the series has been that "everything leads back to Radley," and that may literally apply to Spencer. Like many fans, I've begun to theorize that Spencer is Mary Drake's child, and the hosts of Bustle's Pretty Little Liars podcast, Taking This One To The Grave, have too.

We know that Peter Hastings had a relationship with Jessica DiLaurentis, and I originally thought that Mary may have pretended to be her twin sister, leading to the pregnancy. But, it's not that unlikely to think that Peter knowingly engaged in relationships with both Jessica and Mary — and that could definitely be why he was determined to shut down Radley before any family secrets emerged. The hosts of Taking This One To The Grave have their own reasons for believing this theory, which you can listen to below.

There's also the matter of Spencer's dream sequence that took place in Radley and featured only Spencer and a character credited as "Creepy Dancer" (played by Dance Moms star Maddie Ziegler). Although I originally thought it was a hint that Spencer was institutionalized at Radley as a young child, I think it's time to rethink this theory. As a refresher, here's the scene:

Ziegler's character may actually be a young version of Mary Drake. Rewatching the scene, she repeatedly clutches her stomach, which could be a clue that Mary was pregnant with Spencer while she was at Radley. Additionally, there's no background music — only a few screams and cries that could hint at childbirth and a newborn baby.

And, when the dance sequence concludes, Ziegler is sitting in a chair looking lonely and despondent. To me, this seems a lot like a metaphor for how Mary was essentially abandoned by her family and left alone at Radley. It also seems like this particular room in Radley was the hospital's "delivery room" — and maybe that's why Creepy Dancer lead Spencer there. When Ziegler's character disappeared from Spencer's view, she looked down and saw slippers that read "C. DiLaurentis." So, if Charlotte was born in that room, it's presumably where Mary gave birth to her second child.

Another thing that struck me as odd about this episode was the way Spencer described the dream to her friends. She stated that "Creepy Dancer" looked a lot like Ali, when she clearly resembled Spencer due to her long dark hair and facial shape. But, perhaps it was meant to be a clue that Ali and Spencer are cousins.

And, when a masked Charlotte appeared behind Spencer in the Dollhouse, she told the Liars that she felt the presence of someone she knew from a long time ago, like a "cousin." Although it hasn't been confirmed that Charlotte and Mary's second child have the same father, this seems like an indication that Charlotte and Spencer are related by blood.

At the end of "Exes and OMGs," Spencer flipped through old family photo albums and the look on her face indicated that it may be dawning on her that she was adopted by the Hastings at a very young age. We'll have to wait to find out for sure — in an interview with Entertainment Weekly, I. Marlene King confirmed that the second child is someone we already know, but added that this particular mystery won't be solved until Season 7B. "Someone we already know" doesn't narrow it down very much, but I have a feeling that we'll be seeing Spencer in a new light on Pretty Little Liars.

Listen to past episodes of Taking This One To The Grave here.