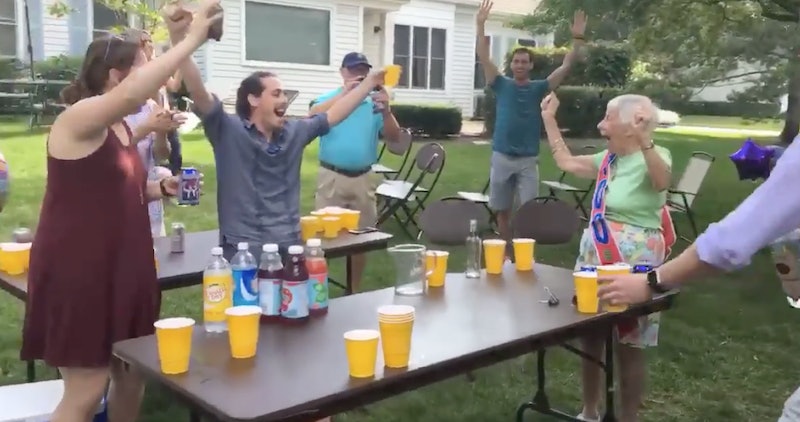 It's never too early to start making #GrandmaGoals for yourself, so while we're drafting our lists, be sure to put this grandma who played beer pong to celebrate her 100th birthday and the tippy top. Not only does this woman slay at beer pong, she basically just made College You look like a total chump. Bedecked with her "100" sash in celebration of a century of badassery, she took aim with the prowess of an Olympian, and the now viral Facebook video of her shot captured every awesome second of it.

The video, posted by grandson Trevor Pope, has now been shared hundreds of times by fellow fans of Beer Pong Grandma. "My grandma just turned 100...she's still crushing beer pong," he writes, which implies that this is far from Grandma's first beer pong rodeo. May we all aspire to be as game as this woman not just on our own 100th birthdays, but for the rest of our lives.

Just in case you doubt how baller this woman is, this video is now every bit as iconic as she is, depicting the exact moment she PUT ALL OF YOU PUNKS TO SHAME with her greatness. Watch and learn, y'all.

Oh, and just in case you thought that was a fluke? BOOM, haters.

That right there is some Beer Pong Hall Of Fame level throwing. If you're feeling mightily intimidated right now, GOOD. You absolutely should. And while we're rounding up old people that we are absolutely not worthy of, let's take a trip down memory lane and visit some more Grandma and Grandpa Goals that have taken the internet by storm ...

So many terrible things to explain, and WAY TOO MUCH TIME!!! But these ladies handled it like total pros.

Incidentally, they too ended up playing Cards Against Humanity — and, of course, eating Oreos. I'm so jealous of their lives right now.

Now excuse me, I'll be watching Beer Pong Grandma over and over to perfect my form. The summer may be ending, but she just proved that SLAYING AT BEER PONG IS FOREVER.