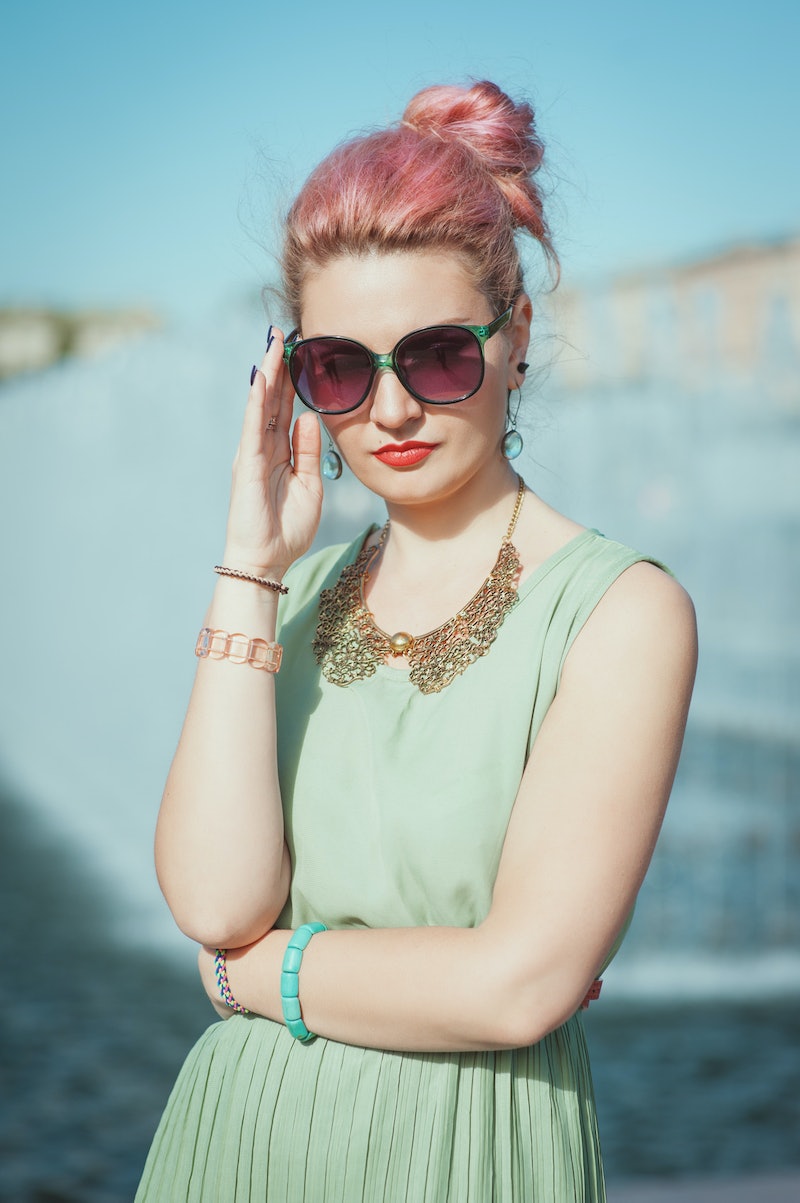 Being in love can be the most amazing thing in the world and as they say, there's no such thing as too much love. But if you've ever been in love with two people at the same time, you might not say the same. In some situations, being in love with more than one person is understood. For example, you're in an open relationship and this is something you've communicated with your partners about. But for those in monogamous relationships, being in love with more than one person may not be a good thing. But it definitely happens, and it can make you feel guilty, uncomfortable, and definitely confused.

"A couple should never lie about growing attractions to someone else," relationship coach and therapist Anita Chlipala tells Bustle. "Secrecy fuels passion... A lie of omission is still a lie, so if a partner doesn't discuss a growing attraction, it can actually make their feelings and desire for this other person stronger. Nip it in the bud by saying, 'Hey, I have this weird crush on this person, can we talk about it? Because I know it's not real.' Most people don't think they would ever cheat, and most don't go out intending to have an affair. They end up setting up their own stage for an affair by not talking about their feelings in the first place."

But how do you know? How do you know your feelings are split between two people (or more)? Here are seven signs you're in love with more than one person:

1. You Get Panicky When One Wants To Get More Serious

If you're not fully invested in one person, then when that person starts to talk about the future or give you attention — and is very clearly focused just on you — it's going to feel weird. You'll probably feel panicky and uncomfortable, even if this is the person you're 'supposed' to be in love with.

2. You're Having The Day Dreams

We all have a tendency to let our minds wander to the person we're in love with throughout the day. It's totally natural. But if your mind is wandering to two people, or even more, rather than to that same someone special over and over, it may be because you're feeling conflicted. The unconscious mind can tell you a lot. "My mother, my first and most prominent mentor, used to say, 'Smart people don't get bored, they get curious,' which aligns with zen psychotherapy," zen psychotherapist and neuromarketing strategist Michele Paiva tells Bustle. "A Buddhist mind is a curious mind... I often tell my clients who state that they are bored, 'Please keep a child's mind in your relationship. Look inward to see if you are unhappy with yourself and creating a scapegoat in your relationship, and maybe you simply need to look within.'" Keep an eye on where your mind wanders and try to take that creativity and do something constructive for your relationship.

3. You're Having Sex Mixups

Classic. Thinking about one person during sex when you're with another one in the heat of the moment is a common problem. Unfortunately, so is saying the other person's name. Try to avoid the latter.

4. You Think About One While With The Other

If you're in love with two people, it might be that you're totally enraptured when you're with both of them. Or it can be that it never feels quite right, because the other person sneaks into your mind and you feel guilty.

5. Your Friends Are Confused About Who You Love

6. When Something Important Happens, You Don't Know Who To Call

When there are big events — you get a new job, your dog dies, you find out about the new series of House of Cards — there's a knee jerk reaction to call your number one person. If you don't know who to go to first, then something may be out of line. It might be that you just get different things from different people, but if you have two people in mind and you feel guilty about calling one more than the other, there's some kind of conflict happening.

7. You Just Get ~That Feeling~

If you're not non-monogamous, then whether you're single or in a relationship, you could have a problem on your hands if you're in love with two people. Do some real soul searching ASAP to minimize the potential damage. It's not your fault that you're feeling this way, but how you handle it could be crucial.

More like this
12 Active Date Ideas That'll Get You & Your Boo Outside
By Lexi Inks
50 Valentine’s Day Instagram Captions To Post If You’re Single
By Jessica Booth, Lexi Inks and Carolyn Steber
18 Hinge Prompt Answers To Try If You’re Looking For Something Casual
By Lexi Inks
My Partner Wants Me To Wear A Diaper During Sex. Help!
By Sophia Benoit
Get Even More From Bustle — Sign Up For The Newsletter
From hair trends to relationship advice, our daily newsletter has everything you need to sound like a person who’s on TikTok, even if you aren’t.