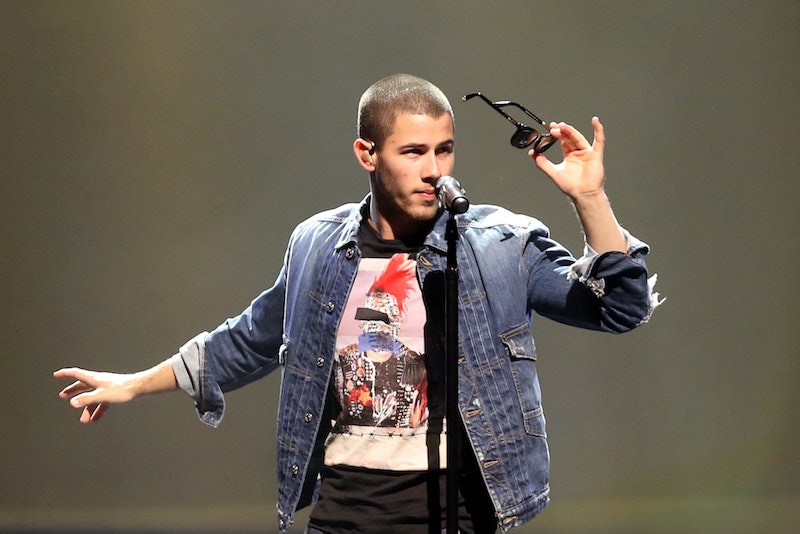 The VMAs take place on August 28, and Nick Jonas is scheduled to perform his smash new single featuring Ty Dolla $ign... "Bacon." Yes, I'm still amazed that Jonas has a song called "Bacon," and that on the surface it seems to be about the delicious, salty, fatty breakfast food. With lyrics like "sizzling, white hot" and "throw some bacon on it," it sure sounds like the pop star has a thing for bacon. But the song also addresses a woman, so who is Nick Jonas' "Bacon" about?

Upon initial consideration, it would seem that Jonas is saying he loves bacon more than his ex, but really what he values is his freedom. He loves his "late nights" and "doing what he wants" more than his relationship, and yes, he loves the freedom to eat bacon as well. Jonas hasn't specified publicly who the song was about, but if you look at the timing of the song's release, my best guess would be Olivia Culpo.

The song comes from Jonas' album Last Year Was Complicated, which was released on June 3, 2016. The album was recorded between September 2014 and March 2016. Jonas and Culpo, on the other hand, dated for about two years beginning in 2013, and they split up in June of 2015 — well before the album was finished. Jonas has even admitted that his breakup with Culpo (his last significant relationship) influenced the direction of the album after it had already started. "When I first started making [the album] I thought I knew what it would be about... Then I had a breakup," the singer wrote on Twitter on March 24. "It then became very clear what this thing would be about... And that I would need to dig really deep." Since the only major breakup on the books for Jonas around that time was with Culpo, it seems she's the subject of the album, and of "Bacon."

Even though it's unconfirmed, since "Bacon" is about a breakup, and since Culpo is Jonas' only recent breakup, it seems likely that she's the one the song is about. Well, her and bacon.