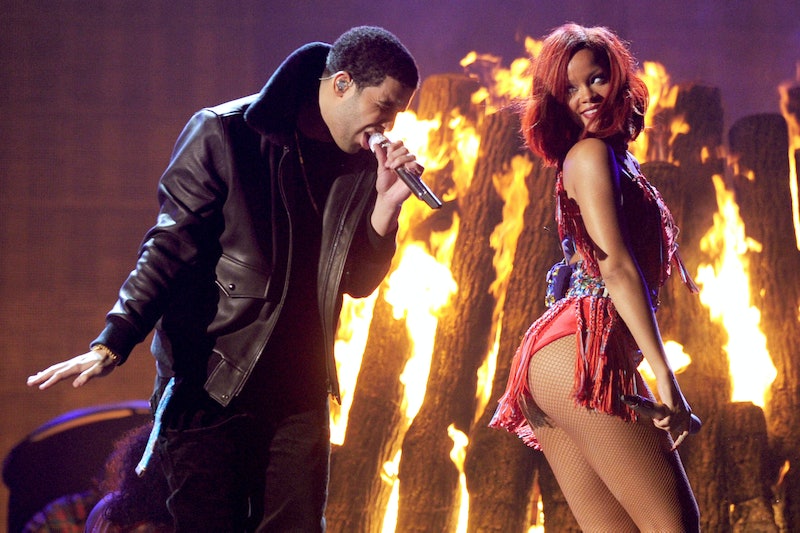 Rihanna's been named a number of things during her extremely impressive career: one of the world's best performers, the sexiest woman alive, the most downloaded artist around, and fashion's greatest muse. Now, the "Work" singer is taking on a new title: the recipient of 2016's Michael Jackson Video Vanguard Award at the MTV Video Music Awards. She joins a string of phenomenal artists like Beyonce, Britney Spears, David Bowie, and Madonna in receiving this award, and, during the show, gets time slotted for a massive, sure-to-be unforgettable performance. Though it's not clear what song or songs she will be performing, the possibility does raise some questions. Like, after collaborating on both of their most recent albums, will Rihanna call on Drake to perform with her?

The pop star has been known to shock and dazzle audiences with her performances, music videos, and standout singles and performances. Her eight Grammys, 14 Billboard Music Awards, 3 Moonmen, and 61 million albums sold worldwide have kept the world entranced by her every breathe — and with a certain rap king featured on her most popular song of the year, "Work," it's not out of the realm of possibility that Drake could make an appearance either to celebrate her success, or to perform alongside her. Furthermore, since 2011, Drake and Rihanna have collaborated numerous times on impressive singles, inclusing "What's My Name" and, more recently, "Too Good" off of Drake's most recent album, Views.

Also supporting this theory is the fact that they've been performing together a lot. In July, the two performed "Too Good" in a surprise variation to Drake's Summer Sixteen/OVO Fest lineup. Also, after appearing on Rihanna's single and video for "Work" earlier this year, the Drake accompanied Rihanna on the BRIT Awards stage in February. Then in March, Rihanna's ANTI tour featured many nights of Drizzy and Rih onstage — one night saw Drizzy proclaiming his love for the Barbadian beauty, saying she is the "most talented, beautiful woman" he has ever laid his eyes on. Not to mention, back in 2011, where their performance story began with the smash hit "What's My Name?" at the 53rd Grammy Awards, they couldn't keep their hands off each other.

With excitement at an all-time high for Rihanna's prestigious Vanguard win, it's safe to say Rihanna has something major planned — it's just not clear yet if that'll include Drizzy. With no confirmation on whether the two will see each other on stage, we will all just have to wait until August 28 to imagine just how hot the MTV VMAs stage will be.