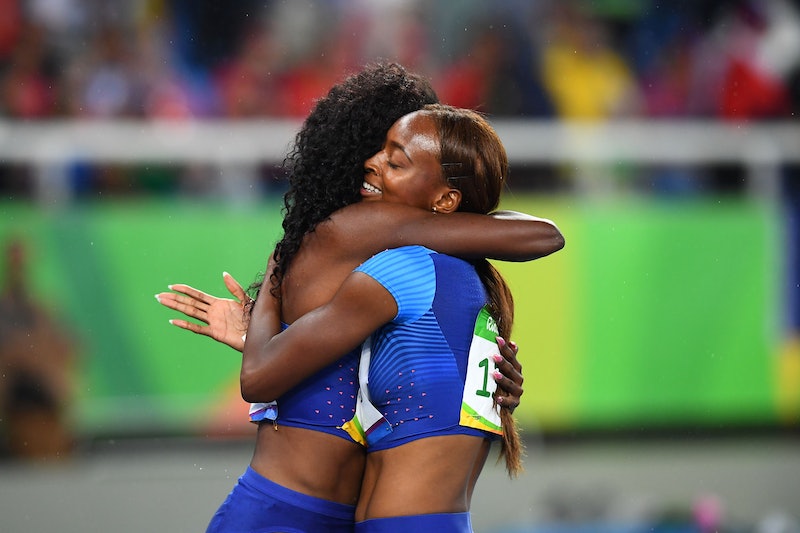 This weekend, the 2016 Rio Olympic Games are drawing to a close. With that finished, we'll all redirect our attention away from the fantastic feats of the world's best athletes to stuff that really matters, like playing Donald Trump Insult Bingo and other things of real substance. Right?

Well, despite what some think, the Olympics aren't frivolous. They're more than just a sporting competition — they're a world stage for examinations of everything from privilege (thanks, Ryan Lochte) to national and cultural tensions. And they're also an excellent opportunity to bring attention to feminism. The glorification of women's physical achievements, the dynamics of press coverage, the diversity of bodies on display: the Olympics brings together ingredients that should make it a prime event on any feminist's calendar, not just two weeks for sports fans.

It's understandable that many feminists might veer away from Olympic coverage; sports reportage hasn't always been a friend to female athletes. But at the heart of the entire Olympic institution is the idea of excellence, and of female sporting triumph earning just as much adulation as male; their medals are the same color. Gender parity is also an increasing factor for Games organizers, with 47.5 percent of the sports on show at Rio featuring women, and female competitors making up a record 45 percent of all athletes present at the Games. Beyond just inspiring the next Laurie Hernandez, the Olympics function as an interesting venue for exploration of feminist takes on ideas like weakness, "proper" female behavior, gender equality in sport, and the importance of intersectionality. As far as a feminist event goes, that ticks a very large amount of boxes.

Here's why the Olympics matters to feminism, in 2016 and beyond.

1. It Challenges The Idea Of The "Weak" Female Body

The idea of the female body as lesser, weaker, less capable and more breakable (and of the female brain as feeble) has been a part of Western thinking for centuries. Aristotle believed that men should rule women as the superior sex; both Hippocrates and Galen put forth elaborate arguments about the inferiority of the female body; and the notion of the female as a "defective" male carried through from ancient Greek thinking into the modern world.

But the deluge of incredible feats performed by female athletes in Rio makes it almost unbelievable that anybody could accuse women of bodily weakness, a lack of focus, or any kind of inherent inferior squishiness caused by the possession of a womb. Adjectivally, societally and athletically, the perception of women as "lesser" remains culturally entrenched, and terms like "girly" and "womanish" are generally not taken to refer to things like Simone Biles' ability to pull off jumps that terrify male gymnasts, or Katie Ledecky's tendency to streak so far ahead of her field that she appears in a race on her own. The Olympics, for a few glorious days, make that completely disappear.

And while men and women remain largely segregated throughout Olympic sports, except in doubles pair sports like tennis, the notion that women will consistently underperform compared to men when it comes to physical feats is increasingly under scrutiny. A 2015 study found that women are better at marathon pacing than men, and Biles herself has been the poster girl for gender-equal excellence, described as "the best athlete at the Games" in any category or sport by the BBC based purely on her enormous strength and gifts (they've describe her legs as "made by NASA"). There are differences between male and female bodies at their elite peaks, of course — but the Olympics reminds us that gender differences are in no way a bar to gargantuan, superhuman achievement in female bodies.

2. It Demonstrates The Versatility Of Female Strength

The notion of there being a single "ideal" female body is one in which the world media trades regularly, and often with little reflection. But the huge range of Olympic sports, from weightlifting to gymnastics to swimming to triathlon, demonstrate with extreme effectiveness that the female body's diversity is a massive asset, not a thing to be repressed.

We need a space in which women like Michelle Carter are celebrated as glorious and beautiful, in which Sarah Robles is given a platform in which her size is an asset, not painted as a negative, and where people built like divers stand beside people built like the women's basketball team as examples of athletic excellence. It's a lesson: the female body can do insane things, regardless of how it's built.

3. It Creates A Space For Female Aggression

I've written about this before: elite sport is, for women, one of the rare public spaces in which being aggressive and competitive is not just permitted, but celebrated. The viewing public sometimes seems to remain slightly ill at ease with this side of the female character, because we aren't supposed to be shouting in opponents' faces and running after them with hockey sticks or intimidating them with our 100m times. But Phelps Face, and the psychological ferocity of any elite athlete, are just as strong among the female cohort at Rio as among the males — it has to be, as that's what it takes to succeed — and that's a huge boon for perceptions of female behavior.

Aggressive females are not often celebrated in Western culture. The Harpy of Grecian myth is frequently invoked as a first comparison: shrieking, bird-taloned she-beasts, terrifying and unattractive. Aggression in women is often seen as animalistic, indecorous, overly masculine and somehow "ungracious." But it doesn't matter if female athletes are gracious. They want to win. If they do it cleanly and without breaking the rules, let them howl and yell and express disappointment and stomp around intimidating their opponents. The female of athletic excellence does not deserve to be constrained by any patrolling of feminine behavior.

4. It Shows The Necessity Of Intersectional Feminism

The furor around gymnast Gabby Douglas again for her supposed "messy" hair and "un-American" behavior is not just about sexism. It's about racism. And Rio points a glaring lens at the reasons why feminism cannot just be restricted to those who are white, able-bodied, straight, and otherwise considered part of the "mainstream." Intersectional feminism, in case you aren't familiar with the term, is the concept that sexist discrimination overlaps with other types of discrimination in the personal experiences of women around the world, from racism to ableism to religious persecution, and that it's unrealistic to refuse to allow those experiences into feminist discussions of equality.

Unfortunately, the 2016 Olympic Games have been a pretty good demonstration of the necessity of intersectionality when it comes to feminism. Ibtihaj Muhammad, the first female athlete to compete in a hijab under the US flag (and, might I add, win an Olympic medal ), and her fate in the press have been a serious signal that some women are more unequal than others. She was criticised for being "anti-American" after discussing her treatment as a woman wearing hijab in New York.

5. It Highlights How Far We Still Have To Go

For all the celebration and confetti around female excellence in Rio, it's also been, as any person with a cursory interest in sports media knows, an incredibly sexist Games when it comes to news reporting. We all know the stories by now: Katie Ledecky's phenomenal world record being relegated to a sub-heading beneath Michael Phelps' silver; the "wife of a Bears player" who won bronze; the worldwide horror when Chinese swimming sensation Fu Yuanhui mentioned being on her period, apparently breaking a "taboo" among elite swimmers. (My favorite sexism-fighting moment has to be the tennis gold medallist Andy Murray, who politely reminded a male commentator congratulating him on being "the first" to win two Olympic tennis golds that "Venus and Serena have four each".)

The rage against these incidents and consequent backlash gives me hope. But it's also a depressing indicator of the overwhelming nature of sexist perceptions and priorities. If it were a highly decorated female swimmer who'd lied about being mugged to cover up vandalizing a gas station, what price the press's forgiveness? Would a Rio executive be talking about forgiveness for "kids" having "fun"? The feminist side of the Olympics isn't just about women kicking ass; it's about what the world says about them when they do. And Rio has shown that we've still got a way to go before we're given our due.