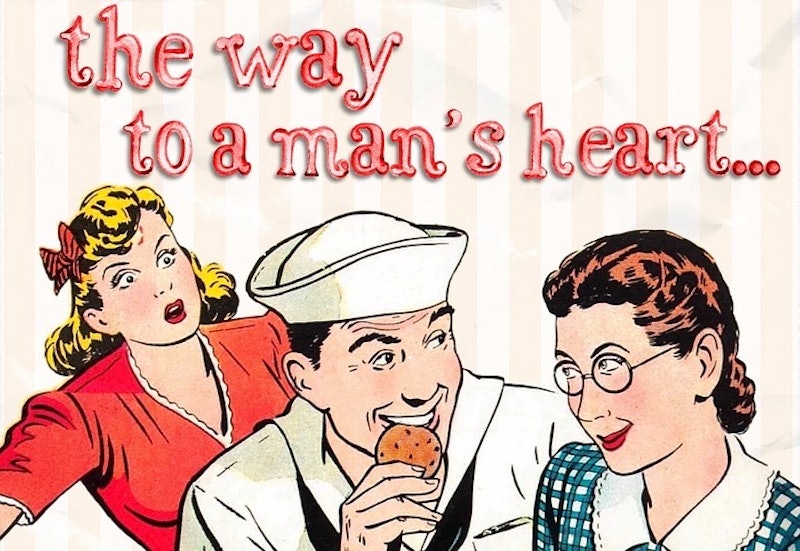 Recently, I've become very acquainted with a feeling that I didn't even know I had the capability to feel so strongly: jealousy. Before I decided to try non-monogamy with my current partner, I'd only experienced the feeling in fleeting moments — passing jealousy towards someone prettier or cooler than me, for instance. But now that my partner has gone on a few dates with someone else, I feel like I know what jealousy really is. It is a physical sensation as much as an emotional one, manifesting in the pit of my stomach and the middle of my throat.

You might wonder why, if jealousy is so intense and uncomfortable, I've been choosing to experience it. Well, trust me, there have been moments where I've asked myself the same question. I suppose the short answer is that I want to know whether non-monogamy is for me, and there's no way to know except to confront these uncomfortable feelings head-on. I already know having the freedom to go out with other people has made me less afraid of commitment and more in love with my current partner. It's only when he exercises that same freedom that I find I come up against the main emotions that comprise jealousy: fear, anger, and grief.

I'm not going to lie — it's painful. But it's also been incredibly fruitful, too. I've learned a lot about my own insecurities and triggers in the last few months, and feeling myself begin to unlearn certain fears has actually been incredibly empowering. One thing I've found especially useful as I navigate this unfamiliar territory is reading some of the excellent writing that has been done about jealousy and non-monogamy. By far my favorite book has been Kathy Labriola's Love in Abundance: A Counselor's Advice on Open Relationships, as well as her accompanying The Jealousy Workbook: Exercises and Insights for Managing Open Relationships. Whether you're thinking about an open relationship, are currently in one, or are in a closed relationship where you often experience jealousy, these books will prove extremely useful.

1. Freud's Theory: Because Mom Didn't Love You As Much As She Loved Dad

Not surprisingly, Sigmund Freud believed that the root of jealousy could be found in The Oedipal Conflict. He believed that every child "fell in love" with their parent of the opposite sex, then felt betrayed when they realized that Mom actually loved Dad, or vice versa. According to Freud, that loss carries into adulthood and gets expressed in the form of jealousy. Of course, Freud's theory was pretty damn heteronormative, and doesn't account for divorced or single parent models. That said, it doesn't mean he wasn't on to something, either.

Freud identifies four major components of jealousy, all of which, I have to admit, feel pretty on-point to me. Labriola explains the breakdown, and how it relates to feeling jealous of your partner's involvement with another person:

First, he believed, we experience grief, the terrible pain of actually losing or being afraid of losing someone we love. Second, we are flooded with the very distressing realization that we cannot have everything we want in life. Third, we are gripped with feelings of enmity towards the successful rival who has won the love of our partner or whom we fear will succeed in stealing our partner. Fourth, we turn our anger on ourselves in a belief that our own inadequacies as a partner will cause our partner to leave us.

So as you can see, Freud viewed jealousy as a nightmare driven by our most primal fears of inferiority, loss, and abandonment.

As much as Freud may have been off about some things, I have to say, that all sounds eerily familiar to my experience of romantic jealousy.

This is probably the theory you're most familiar with, because it tends to drive the popular narrative as to why monogamy is the "natural state" of humans. (This idea is thoroughly critiqued in the book Sex At Dawn , by the way, but that's a whole other article. You can listen to author Christopher Ryan's TED talk above to get the basic idea.) Suffice it to say, the basic idea behind the Darwinian theory of jealousy is that "the feeling is evolution's way of getting us to pay attention to a potential threat to the family unit," as Labriola puts it.

Darwin also posited that men's jealousy tends to center around the idea of their partner having sex with another man (because that would threaten knowing whether paternity was actually his), while women tend to get more jealous of emotional intimacy (because it's a sign they might get left for another commitment). While there could very well be lots of truth to this theory, it's been adopted by pop psych culture to such an extent that it can have sexist implications. We're all familiar at this point with the idea that men "naturally" want to spread as much seed as possible, while women always want to "protect" the fidelity of men, since it's far more risky for a woman to "invest" in sex.

Again, not only does this theory not account for non-hetero couples or birth control, but it also doesn't seem to account for the reality that women cheat and crave multiple partners just as much as men do. It also perpetuates the idea that women are inherently more jealous than men due to biology. As Labriola writes, other researchers have presented evidence that, in fact, men get just as jealous as women, but simply tend to express it in different ways. "Women are more likely to internalize fear and despair, while men are more likely to project it outward as anger towards their primary partner or person they see as a rival."

My experience has personally been that I've felt all of the feelings above, but have actually been more likely to express anger than my partner. So basically, everyone is different, and when it comes to reinforcing gender stereotypes, Darwin can be hella problematic.

3. Dr. Hupka's Theory: Because Jealousy Is A Social Construct

Dr. Ralph Hupka is a cross-cultural psychologist who has studied jealousy in societies around the world and has found that the prevalence of the feeling in a culture varies widely. Hupka found that there were certain patterns in societies like ours where jealousy was most prevalent. As Labriola explains, these societies all seem to have,

- A strong emphasis on property rights, in relation to material possessions, land, and "ownership" and control of spouse and children

- Strong emphasis on marriage for economic survival and social status, more so than for love and companionship.

In societies where these values are not as strong, people report less jealousy. In other words, according to this theory, jealousy is more socialized than it is innate.

4. Dr. Pines' Theory: Because We Have 5 Main Fears

Dr. Ayala Pines is a psychologist who specializes in studying jealousy, mostly as it pertains to monogamous couples. Her theories around jealousy are too complex to explain in full here, but basically, she believes the feeling is based on a unique combination of your childhood, your previous relationships, and the dynamic of your current relationship — making no experience of jealousy the same in any relationship.

Pines suggests that at the core of your jealousy lies in the trait that attracted you most to your partner in the first place — and your fear of losing that very thing is what sparks it. So if, for example, what attracted me most to my current partner was the feeling of being "chosen" by him very intensely and romantically, that is what I fear will be lost or cheapened most by him dating someone else, even if I know logically that there is no threat of him leaving me.

Also interesting are the five cardinal fears that jealousy triggers in us. Depending on our history, one of them is likely to be the dominant fear. Labriola breaks them down, and how they might apply to non-monogamous relationships:

-Fear of abandonment ("He's going to leave me for someone else.")

-Losing face and losing status in our community ("How could she humiliate me by telling our friends about sleeping with him?")

-Betrayal ("I just can't believe he would hurt me like this!")

-Competitiveness and fear of our own inadequacy: ("I wonder if her new lover is better in bed than me!")

-Envy towards our partner's other partner ("If only I was as attractive/smart/successful/rich/etc. as he is!")

Labriola tells Bustle that when it comes to non-monogamous couples, "there is a sixth key fear that drives our jealousy: the fear of scarcity, of not getting enough of my partner's time, attention, romantic love, affection, or sex. For some poly people, this is the number one fear driving their jealousy, fear of deprivation and scarcity, of being starved for love and affection."

Obviously, the first step is identifying which of these fears rings truest for us, and addressing them with our partner to see how they might be mitigated with rules or reassurances. To really get into this, I also recommend Labriola's The Jealousy Workbook , which has various exercises that will teach you all about the root of your fears.

5. Kathy Labriola's Theory: Because Jealousy Is A Useful Alarm System

As a counselor who works primarily with non-monogamous couples and a polyamorous person herself, Labriola says she's come to believe that jealousy is not inherently a negative emotion that we have to suppress or learn to get rid of. Instead, it is a natural response that serves the purpose of alerting us to when we don't feel safe, and drives us to pay attention to and protect our relationship, especially as other outside factors are introduced that change the dynamic. She likens jealousy to a smoke alarm — it's alerting you to potential danger, and it's telling you that you need to check whether your relationship is actually on fire, or whether it is just a false alarm.

"A new relationship is not a threat per se, but any new relationship has the potential to disrupt, destabilize, or destroy your relationship," Labriola writes. For this reason, we should actually make friends with our jealousy, and can view it as our "protective ally, and pay attention to jealous feelings, as they can encourage you to look closely at what is going on in your relationship and continue to assess whether there is cause for concern or whether you can turn down the jealousy alarm."

Of course, it's anything but easy to know whether you're actually safe when you're feeling in the middle of a jealousy attack, which is why reading these books, communicating with your partner, and confronting your insecurities are all essentials when it comes to exploring non-monogamy. But forgiving yourself for feeling jealous — without automatically believing that all jealous feelings are necessarily founded in reality — certainly has felt like a good place to start.