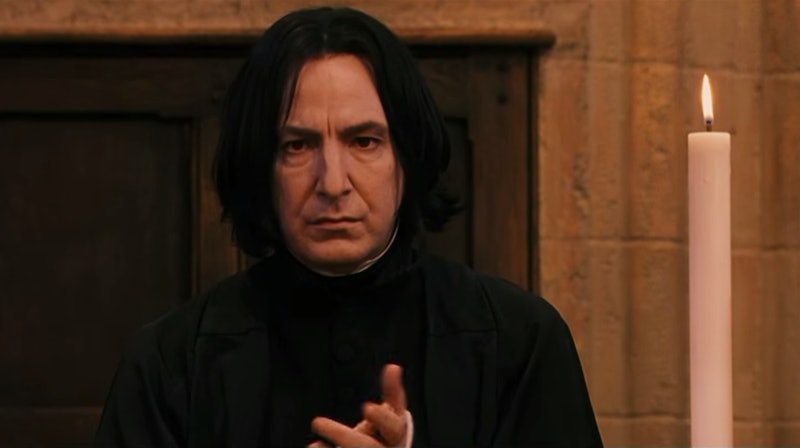 As a person who has long since been on Team Stop Romanticizing Snape, Seriously Guys, He's A Tool And A Half, I would like to take a moment to stand up and applaud this Reddit user who discovered that Snape's detentions in Harry Potter were actually a hell of a lot more evil than we originally thought. Never mind the fact that Snape was quite liberal with detentions as it was — basically if you sneezed, BOOM, detention — but it turns out that the nature of his detentions makes Umbridge's look like amateur hour.

Here's the Reddit post from always934 (NERDY USERNAME SWAG) that proves Snape is nothing but a bully once and for all:

Not sure how I missed it the first million times through the books, but when he has a Gryffindor in detention, he seems to make them cut up animals that they own.

He has Neville disembowel a whole barrel of toads, and he has Ron and Harry pickle a whole bunch of rat brains.

Kinda adds an extra level of malice to their detention.

Um, raise your hand if you just threw up in your mouth a little. Because that is 86 bajillion levels of twisted.

Of course, this is far from the first easter egg J.K. Rowling cleverly planted into Snape's narrative (although it is, by far, the most disgusting). Last November, Tumblr user tomhiddles got their Latin swag on and discovered the heartbreaking meaning behind Snape's first words to Harry:

The first thing Snape asks Harry is “Potter! What would I get if I added powdered root of asphodel to an infusion of wormwood?” According to Victorian Flower Language, asphodel is a type of lily meaning ‘My regrets follow you to the grave’ and wormwood means ‘absence’ and also typically symbolized bitter sorrow. If you combined that, it meant ‘I bitterly regret Lily’s death’.

This might incline people to feel bad for Snape, and I take no issue with that. We should feel bad for Snape. He had a sucky, unfulfilled life, shaped by bad parents and evil and unfulfilled expectations. But as for siding with Snape, or thinking that any of his regrets or actions in the later books redeem the way he treated Lily Evans and or any of the students he psychologically tortured in his classes? Sorry not sorry, guys, but I'll never be on board with that. He can take his "Always" and shove it where the sun don't shine.