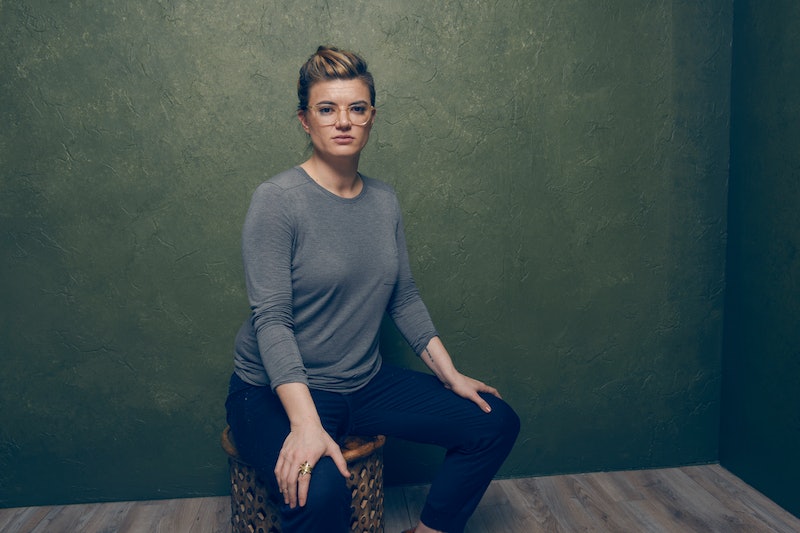 When Bridesmaids came out in 2011 and became a box office smash, it seemed, for a time, that we were about to enter a golden age of women in comedy. With one movie starring foul-mouthed women winning over audiences, it was only natural that studios would green-light as many similar films as possible, right? Not quite. As fans have seen, the success of one hard-R movie starring women hasn't led to a surplus of lookalikes, but rather, just a handful of female-led comedies from over the past few years, all of which have come with the unfair burden of being successful or else jeopardize the future of any movie starring women getting made. We may live in a time where Amy Schumer and the Broad City gals are our superstars, but when it comes to movies about "bad" women? They're still few and far-between, and director Leslye Headland thinks she understands why.

"There’s still this idea that hard edges are not good," Headland, the filmmaker behind Bachelorette and Sleeping with Other People, tells Bustle. "Or if it is, it’s sort of feminized. I think of one of my early reviews was like, 'stiletto sharp writing,' or something, and I was like, what the f*ck does that mean?' Like I’ve ever worn stilettos. Like there’s anything about me that’s stiletto."

When Bachelorette came out in 2012, the Bridesmaids comparisons came fast and hard, as did the pressure for the film to be the same type of raunchy yet uplifting, female-led work for audiences to immediately gravitate towards. On the surface, the two movies sound alike — they're both R-rated comedies about a group of female friends coming together for a wedding — but unlike the lighthearted, Wilson Phillips-soundtracked Bridesmaids, Bachelorette is dark and painful, a film set on revealing harsh truths about the bonds shared between women. The edginess of the film turned away viewers who were expecting a Bridesmaids clone, and although Bachelorette eventually found success on demand, its theatrical run was marred by a weak box office and middling critical reviews, some of which bordered on sexist.

The Bachelorette backlash was brutal, leading Headland, as she recounted in a 2015 Elle interview, into a depression. Her movie was no darker than the many male-led dramedies in theaters that critics and audiences happily lapped up, yet the fact that it starred women meant that its themes of sex, drugs, and betrayal were unacceptable. Speaking of the movie's release now, Headland is sunny, easy to laugh; she's moved on from that time, with another film, a screenplay, and a new Off-Broadway play under her belt. Yet the frustration she felt over the double standard she faced back then, and that continues to exist in Hollywood now, is still evident. "I always see it with my female writers or my female filmmaker friends," Headland says. "They're like, 'isn’t that the same movie as so and so’s, and he’s going to the Oscars this year?' And I’m like, 'yeah, sorry, I don’t know what to tell you.'"

Headland is the first to admit that, all in all, Hollywood has treated her well; Bachelorette, for all its criticism, caught the industry's attention, and Sleeping with Other People, her second directorial effort, was a Sundance hit. Her new play, The Layover , is making waves ahead of its Aug. 25 debut, and two Funny or Die videos she directed hit the internet earlier this year. She's fully aware of how rough it can be to be a woman filmmaker, but, she says, "I’ve been too lucky to bemoan that sh*t." Still, she wants more — for female directors to be more prominent, on their own terms ("I don't think it’s an accident that Kathryn Bigelow and Sofia Coppola... are the only two women that’ve been nominated for an Academy Award for Best Director, and they’re both associated with huge male directors"), and for the conversation about why women aren't getting ahead in Hollywood to change. "When I hear the argument that we live in a meritocracy and cream rises to the top, and if women made better movies, we’d see more female directors, I’m like, 'you are garbage, whoever you are that’s saying that,'" Headland says, her hearty laugh not quite masking the seriousness of her tone.

With The Layover, a play she describes as a "romantic Strangers on a Train," Headland decided to take a step back from the directing world, writing the script and letting Off-Broadway veteran Trip Cullman take the helm. Being solely a writer came as a relief to her ("it isn’t my whole f*cking soul. It’s somebody else’s," she says with a laugh), and the play, about a man and woman who fall for each other during a plane layover, is full of the sharp, cutthroat humor fans of Bachelorette and SwOP will devour. It's a dark play, perhaps more so than any of Headland's previous work, and the thought of that seems to thrill her; the criticism she got for Bachelorette, it seems, hasn't altered the style of her writing or the themes she chooses to explore. "I think Truffaut said, all filmmakers make the same film and then they break it apart and then they make it again, and I don’t think that I am any different," Headland says. "I think that I am basically telling the same story, which is about people that choose to worship the wrong thing."

She pauses briefly, before adding with a smile, "And learn the lesson of what it’s like to have that thing either fail them or die."

Four years after Bachelorette, Headland, it seems, still isn't looking to make her audiences — or her critics — feel happy or uplifted. Instead, she's perfectly content being the dark, defiant rule-breaker she is.