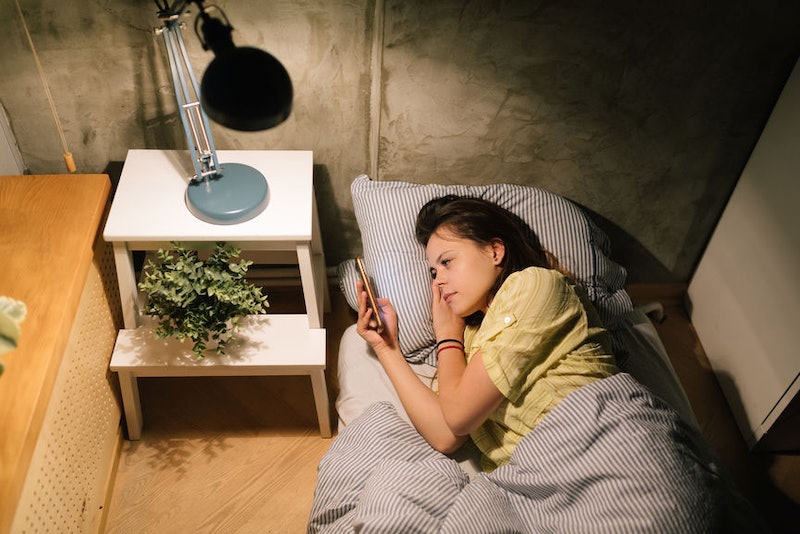 How many times have you laid awake at night, unable to go to sleep, having to grab your phone for any resemblance of entertainment? And how many times have your eyes started to water due to the brightness of your phone screen when scrolling through your Twitter feed? Well, Twitter can't help you with your insomnia, but it has rolled out a new feature that's got everyone asking what Twitter night mode is and how they can get it.

The new feature Twitter is rolling out has been available for Android users since July, but is just now hitting iPhones as well. It makes it really easy to use the app in dark environments — such as your bed, at night. It basically tones down all of the bright hues that irritate your eyes, replacing them with darker ones that enable you to enjoy your experience with little light. No more squinting and trying to see if the brightness on your screen can possibly go down any more. Now it's automatically available right under your fingertips.

Twitter hired a pretty well known app developer Joaquim Vergès to take on the challenge. He was perfect for the job due to his highly sought after night-mode feature on Falcon Pro. After joining the Twitter team and testing out the feature, Apple was finally ready to roll out that amazing update! I cannot wait to give this one a go. From the looks of the promotional videos it's really going to help out people like me. Bring on the Night Mode!

In order to get this awesome feature on your phone all you have to do is get the updated version of Twitter into your iPhone. Then you just go into your Settings, click on display, and sound and toggle it into the proper position. The rest is eye magic. You will enjoy your Twitter experience that much more during the night time hours. Now if only they made the day-light display much brighter for when you are walking in the sunshine ...

So far people have been responding pretty well to the new feature.

Some users are even saying that the display is more appealing than the original and will keep that going instead of just turning it on or off.

I have to agree. There is something about the dark hues of the Night Mode that is really working for me! It feels sophisticated and almost legitimizes my tweets about obscure pop-culture facts. If only every app had this feature...

So update your Twitter app and play around with this new feature. Be the Batman of your own Twitter destiny.