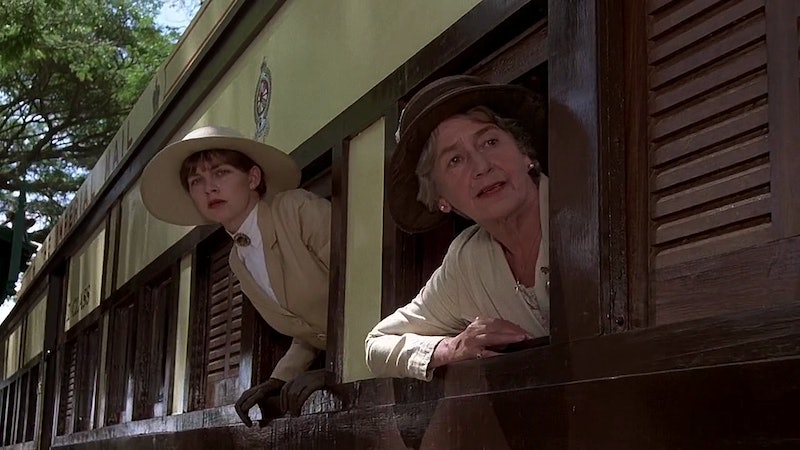 I am generally pretty upfront about the fact that I self-identify as an agnostic. If you don’t know what an “agnostic” is, or what agnosticism means, basically, I am open to the idea of God, and perhaps to some religious system(s), but ultimately, in my very humble opinion, no one at this point in time can objectively and irrefutably prove that there is, or isn’t, such a thing as “God” or the “divine.” I do, however, identify more as an “agnostic theist,” than an “agnostic atheist”; I lean more towards spirituality being, possibly, a real, and present thing than perhaps other agnostics would. One reason for this is because of E.M. Forster’s novel, A Passage to India, a book which helped me come to terms with my own views on spirituality.

For some context, though my mom is ethnically Jewish, I grew up in a pretty unreligious household. My parents never really discussed religion or God in any way other than, “Christmas is about the birth of baby Jesus,” a man I knew about, but in no real or genuine way that would have lead me to be a stout believer. However, towards my middle school and high school years, I began attending youth groups and Christian summer camps. Soon after that I began attending actual non-denominational church with some friends of mine, and I maintained a fairly regular attendance. I believed then, sure, but I wasn't really devout. Still, I was at least sure enough in my religious convictions that when I reached university and began to grapple with the authenticity of religion, I felt lost.

I especially struggled with the idea that religion — specifically Christianity, though many other organized religions do this as well — sometimes taught me, or off-handedly advised me, to hate and vilify other people or groups. I remember being told at church that homosexuals were ungodly sinners, that Muslims had bastardized monotheism (and were terrorists), and that “Godly women” should be chaste and obedient (women who weren’t demure or “pure” were sad, corrupt souls that should be pitied — and “saved”). So, needless to say my idea of religion soured during university, and it actually caused me a lot of distress. I wanted to know. I felt like I desperately needed to know if God was real or not.

The four years of my undergraduate degree came and went, and then graduate school came. In one of my classes during the first year of my master's degree, we read Forster’s A Passage to India. The novel is about the colonialist occupation of India during the 1920s, and it mainly revolves around four characters: Dr. Aziz (and Indian Muslim), Mr. Cyril Fielding (a British atheist and humanist), Mrs. Moore (British, who starts off the story as religious, but her views are muddied as the story goes on), and Miss Adela Quested (also British, with no real religious claims in the story). During a trip to a place called the “Marabar Caves” in India, identities are questioned, racism is exposed, and all of the characters are irrevocably changed forever (no spoilers here!)

Mrs. Moore is the character I relate to the most — spiritually speaking, at least. Though her theological humanism and understanding of the world is at first doctrinally specific (Christian), Forster also offers glimpses of Mrs. Moore’s Hindu inclinations. Hinduism seems to “own” the landscape in A Passage to India, not Islam or Christianity, which are both monotheistic traditions. Forster constantly reminds us of the unknowable mystical wisdom that the Marabar Caves hold. Furthermore, one’s experience in these caves exists outside of humanity’s constructs, for a visitor that returns from the caves is, “uncertain whether he has had an interesting experience or a dull one or any experience at all. He finds it difficult to discuss the caves, or to keep them apart in his mind… Nothing, nothing attaches to them, and their reputation—for they have one—does not depend upon human speech.” In the caves, Mrs. Moore comes into contact with an echo (a “boum”), which is monotonous and “devoid of distinction," and it produces an awakening in Mrs. Moore that rocks her whole being. What she discovers in the caves is that, “Pathos, piety, courage—they exist, but are identical, and so is filth. Everything exists, nothing has value,” and Mrs. Moore’s important sense of Christianity is now shattered: “that all its divine words from “Let there be Light” to “It is finished” only amounted to “boum.”

The boum represents a spirituality that exists outside of man-made religion. The “boum” was there before God said, “Let there be Light” and it will exist, argues Forster, after He exclaims that, “It is finished.” The tone of the scene that features Mrs. Moore’s religious ruminations post-cave expedition is one of confusion and loss. For the first half of the novel, Mrs. Moore’s religion is her key to understanding, but as the story goes on, her sense of her own religion, Christianity, is subverted, and begins to shrink and eventually mean nothing to her. Therefore, religion is no longer a way in which to interpret and understand people and the happenings of the world for Mrs. Moore — it is too unknowable.

But, how did the character of Mrs. Moore and her own spiritual crisis aid me in my own? Well, like Mrs. Moore, I also — though maybe I was not as devout as others — experienced a sense of loss when I began to depart from the only religion I’d ever known. Despite its problems, Christianity was a comfort to me, and helped me to articulate the world and to rationalize its virtues and tragedies. Without that I felt confused, destabilized. In the end, Mrs. Moore couldn’t deal with the idea that perhaps there is no God, or perhaps there is but He (or She, or It) is ultimately unknowable and possibly ambivalent, uncaring even. Unlike Mrs. Moore, my epiphany unsettled me, but also helped me in determining my own sense of spirituality. What I realized was that maybe there are “divine” or “holy” spaces on this Earth. Maybe they exist in caves, in forests, in children, in books, or wherever. Maybe people do experience a sense of “awe” or “peace” that could be construed as evidence of some kind of deity, but maybe not. Yet this uncertainty, though perhaps frustrating at times, is okay. We don’t know what’s out there. We probably never will. I have personally found that it is enough to say, “I don’t know for sure,” because we don’t. But one thing I do know is that after reading A Passage to India, I began to identify as an agnostic, specifically an agnostic theist.

I do believe there may be some mystical sense and presence of “God” in this world, but I don’t think there is necessarily only one route that can be used to get there — and I will never, ever tell someone what to do or what to believe in. It’s too unknowable. Christianity claims, more or less, that it is the one and true religion (as do many other religious traditions), but what about Hinduism? Islam? Buddhism? Jainism? Judaism? Confucianism? Existentialism? Mother Nature, even? Who’s to say there is a God? Who’s to say there isn’t? And if there is a God, can He really be contained to the rigid confines of just one, traditional religion? Or is “He,” like the Marabar Caves, ever-present and indefinable?

No need to elaborate. Boum.