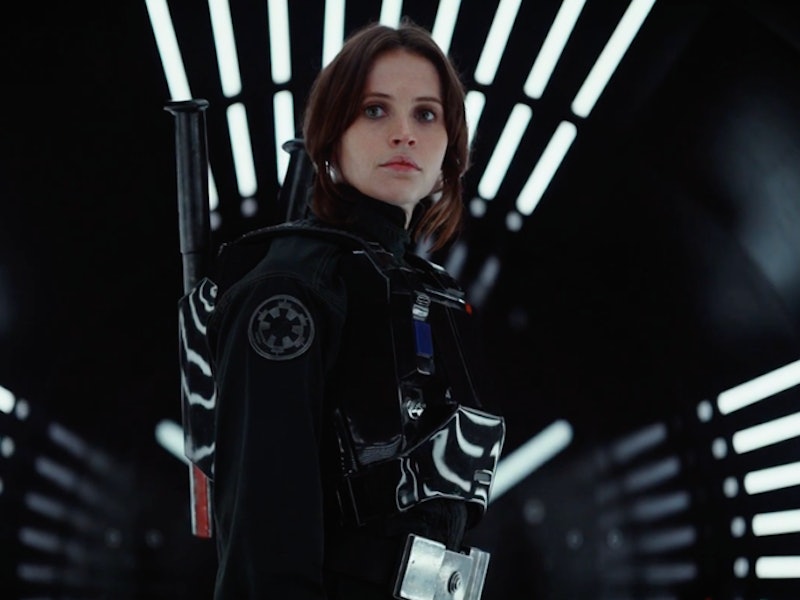 The buzz has been building feverishly for Rogue One: A Star Wars Story since it was announced, so if you're a Star Wars fan, oh, it's a wonderful time to be alive. Rogue One will not only be the prequel to one of the biggest film franchises in history, but also it looks like it's going to give us another badass protagonist with Jyn Erso. Count me all the way in. But, with the release of a new photo from Empire Magazine's upcoming special Rogue One-themed issue, we get to take a peek at a different aspect of the Star Wars universe entirely. The new photo shows Jyn, Cassian, and their droid K-2SO on the Jedha Moon, the locus of all Jedi activity, and it raises a ton of questions. Namely, about the exciting possibilities for where the Rogue One story will go, and about why Jyn and her crew are there.

While the Jedha Moon becomes a part of the Empire's holdings by the time Star Wars: The Force Awakens occurs, during Rogue One it is still portrayed to be a thriving planet. It is considered the spiritiual home for the Jedis, as it's the place which contains materials used to make lightsabers and is host to those studying the Force — as a result, it acts as a pilgrimage site for all those who wanted to understand and master it. In the Star Wars lore, Jedha eventually falls under the rule of the Galactic Empire, doomed to become a shadow of its former glory.

It looks like Jyn, Cassian, and K-2SO may be sent to Jedha to not only find out what evil plans the Empire is cooking up, but possibly also to recruit the rest of their team: Jedis Baze Malbus and Chirrut Imwe, as well as Rebel pilot Bodhi Rook. Either way, this image only stirs up my feeling that Rogue One is going to be ridiculously epic and, if anything, the Jedha Moon is going to be the backdrop to some truly amazing fight sequences. It may also be the place where we watch Jyn transform from a rebel into a Rebel leader as she puts together her unstoppable team. Will she feel the Force while she is on Jedha, though?

Take a peek at the Olympic trailer to catch some live-action shots of the Jedha portion of the mission: