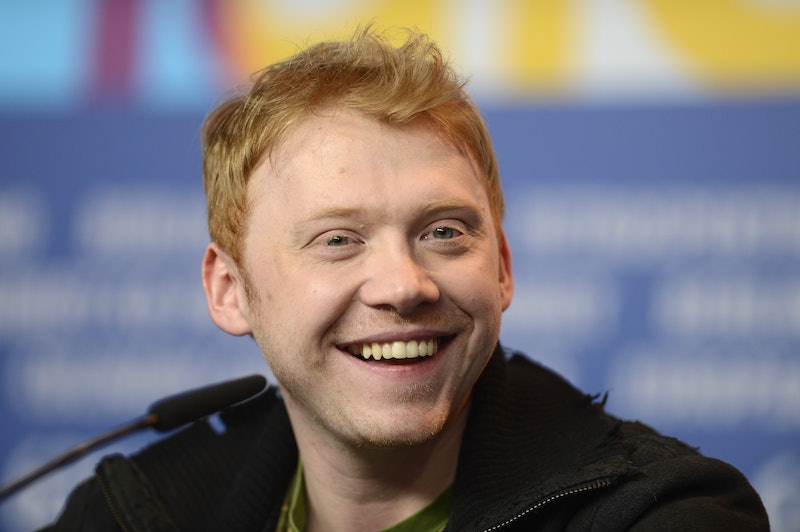 As an actor, it can be difficult to distance yourself from an iconic role — so it has been impressive to watch the trio of young actors from the Harry Potter franchise cultivate remarkably diverse careers since their defining roles as Harry Potter, Hermione Granger, and Ron Weasley. Their shared resumé includes everything from horror movies (The Woman In Black) to biopics (Kill Your Darlings), from literary adaptations (The Perks Of Being A Wallflower) to Biblical epics (Noah). Of the three, Rupert Grint has been the most laid-back in his pursuits; he has added only three live-action feature films to his credit in the five years since Deathly Hallows Part 1, compared to Emma Watson's seven and Daniel Radcliffe's nine. But he's about to take on his biggest post-Harry Potter role yet… and it couldn't be farther from his wholesome Ronald Weasley days. According to Deadline, Rupert Grint will star in Snatch , a new TV series based on the 2000 movie of the same name starring Jason Statham.

Wait, what? Few people would probably have predicted the fact that the rosy-cheeked boy who played Ron would one day grow up to be the ideal replacement for Statham, one of the most reliable and kick-ass action stars in Hollywood — and yet here we are. The original Snatch was the second feature from British writer/director Guy Ritchie, the follow-up to his acclaimed 1998 debut Lock, Stock And Two Smoking Barrels. Statham led an ensemble cast including Brad Pitt and Benicio del Toro in a gritty crime saga involving diamonds, dogs, and bare-knuckle boxing matches.

The small screen adaptation of the film will stream on Crackle, the online platform most notable for its Jerry Seinfeld-hosted talk show Comedians In Cars Getting Coffee. According to Deadline's report, Crackle's Snatch won't be a direct remake of Richie's movie, but rather "will carry the spirit of the setting in the film, while creating a new world with new characters."

Inspired by a real life heist in London, Snatch centers on a group of twenty-something, up-and-coming hustlers who stumble upon a truck load of stolen gold bullion and are suddenly thrust into the high-stakes world of organized crime. The boys must quickly learn to navigate the treacherous waters of London’s underworld as rogue cops, gypsy fighters, international mobsters and local villains descend.

While in Ritchie's Snatch, Statham played a boxing promoter named Turkish, in Crackle's Snatch, Grint will be playing Charlie Cavendish, a "dynamic, frustratingly chaotic and utterly posh con man." So even though he's replacing Statham as the lead of a property called Snatch, Grint isn't actually playing the same role as the famous action star — which makes the casting news make marginally more sense.

After Snatch, Ritchie would go on to direct more action-heavy films like Revolver and RocknRolla; and obviously Statham would go on to star in such high-octane action flicks like The Transporter, Crank, and The Expendables. But in reality, Snatch itself isn't really an action movie as much as it is a darkly comic crime caper. That genre should be a good fit for Grint, who has experience with crime and dark comedy in the likes of Cherrybomb and Wild Target, both of which premiered in the midst of his Harry Potter days. And though the 27-year-old redhead seems a far cry from the 49-year-old chrome dome, Statham was only 33 when Snatch premiered in 2000, putting Grint in the relative ballpark of his forerunner's age at the time.

Grint isn't the only high-profile name joining Snatch, either. Dougray Scott (Mission: Impossible II) will play "Vic Hill, who continues the con game from inside prison," and Ed Westwick (Gossip Girl) will play "night club owner Sonny Castillo." The 10-episode first season is due to start filming next week, and will debut on Crackle sometime in 2017. That gives us plenty of time to get used to the idea of "Ron Weasley: The Next Jason Statham."