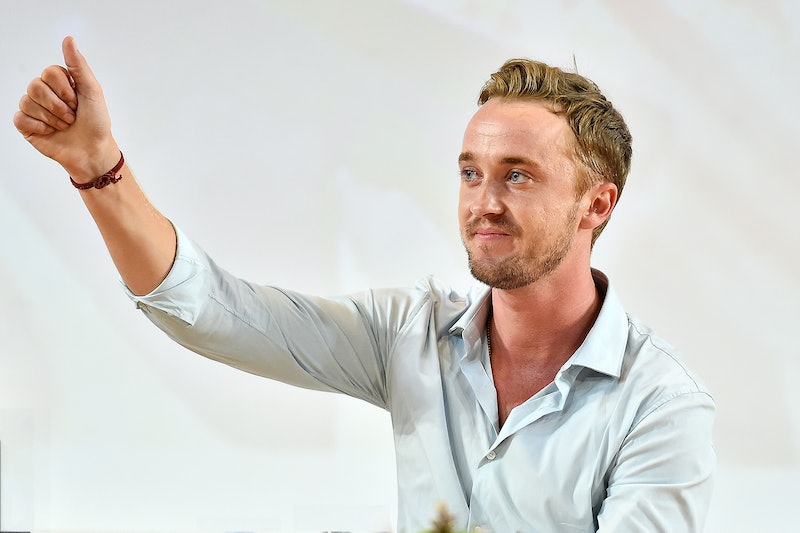 It has been over four years since Harry Potter And The Deathly Hallows — Part 2 drew the epic saga of The Boy Who Lived to a conclusion on the big screen. (Wow, I suddenly feel really old.) With so much time having passed, that means that it's A) definitely time to start re-reading Harry Potter over from the beginning, and B) the young actors we all knew and loved as Hogwarts students have all grown and started embarking on real careers. Such is the case for that sniveling git Draco Malfoy: Tom Felton has been cast alongside Kate Mara in an untitled Iraq War drama from the director of acclaimed documentary Blackfish.

The film will tell the true story of Megan Leavey (Mara) and her bomb-sniffing dog, Rex. Edie Falco has been cast as Megan's mother, and Felton will appear as a K9 unit expert. The 28-year-old is also currently in production on a period romance called United Kingdom, about a member of Botswana's royal family who falls in love with an English commoner, played by David Oyelowo (Selma) and Rosamund Pike (Gone Girl), respectively.

Felton isn't the only young Harry Potter actor still pursuing a film career, though. Many of the kids who played his classmates have faded back into obscurity or, even more tragically, passed away (Rob Knox, aka Ravenclaw Marcus Belby, was killed in at the age of 18). But most of the higher-profile actors are still hard at work on film and television.

Here's where you can see the younger generation of Harry Potter stars next.

For his next project, boy wizard Harry Potter has joined the cast of the magician-themed sequel Now You See Me: The Second Act , appropriately enough. But, this time, he's not playing the hero. Radcliffe will appear as Walter, the son of Michael Caine's Arthur Tressler, who is out for revenge against the Four Horsemen following his father's imprisonment. Following that, he'll star in the thriller Imperium, as an FBI agent who goes undercover with a homegrown terrorist organization.

Watson has been busy lately. You'll next be able to see her in the horror film Regression, opposite Oscar nominee Ethan Hawke and her former Harry Potter co-star David Thewlis (Remus Lupin), premiering in February of next year. Then she'll appear in the political thriller Colonia, alongside Daniel Brühl (Rush) and Michael Nyqvist (Mission: Impossible — Ghost Protocol). Following that, she'll star in the adaptation of the best-selling novel The Circle, with a terrific cast including Tom Hanks, Bill Paxton, Patton Oswalt, John Boyega (Star Wars: The Force Awakens), Ellar Coltrane (Boyhood), and Karen Gillan (Guardians Of The Galaxy). Finally, Watson will headline Disney's live action remake of Beauty And The Beast , opposite Downton Abbey's Dan Stevens as her Beast, and an all-star cast as the enchanted servants — Ian McKellen, Emma Thompson, Ewan McGregory, Kevin Kline, Stanley Tucci, Audra Macdonald, Josh God — due out in 2017.

Ron Weasley next appears in the comedy Moonwalkers, in which he and Ron Perlman (Sons Of Anarchy) co-star as a rock & roll manager and a CIA agent who team up to make a fake moon landing video with director Stanley Kubrick... in case the real one fails, of course. The movie premiered at South By Southwest Film Festival earlier this year and was picked up for distribution, premiering theatrically next January.

When he's not busy growing far more attractive than anyone anticipated, Neville Longbottom has been filming a romantic drama called Me Before You, based on a 2012 novel about a young woman who starts working for a man rendered quadriplegic by a car accident. Me Before You stars Game Of Thrones' Emilia Clarke as Louisa and The Hunger Games' Sam Claflin as William, and Lewis will appear as Patrick, Louisa's personal trainer boyfriend.

In case you hadn't noticed, Dean Thomas can be seen on ABC every Thursday not as "the puppy" Wes Gibbins in Shondaland's How To Get Away With Murder. (Did he shoot Annalise? What are Wes and Nate planning? Will we ever be able to watch scenes in the Gryffindor common room the same way again?? These questions demand answers!)

Who would have thought that smarmy Cormac McLaggen's career would have taken off quite so successfully after Half-Blood Prince? Not only did Stroma star in the summer's unexpected breakout hit UnREAL as sympathetic bachelor Adam Cromwell, but he's now been cast in TV's buzziest drama, joining the cast of Game Of Thrones Season 6 as Samwell's most capable younger brother, Dickon Tarly.

Fun fact: Harry Potter and Cedric Diggory have both shared a co-star in a post-HP biopic. After Radcliffe starred opposite Dane DeHaan (Chronicle) in the 2013 Allen Ginsberg biopic Kill Your Darlings, Pattison is now starring opposite DeHaan in the 2015 James Dean biopic Life, out in December. (Pattinson plays Dean's photographer Dennis Stock.) In 2016, Pattinson will be seen in the literary adaptation The Lost City Of Z alongside Charlie Hunnam (Sons Of Anarchy), Sienna Miller (American Sniper), and Tom Holland (aka soon-to-be Spider-Man).

Hmm, what has Bill Weasley been up to since Harry Potter... Let me see... Oh, not much, just this little film you miiiiight have heard of called Star Wars: The Force Awakens. Gleeson (the son of fellow HP co-star Brendan Gleeson, aka Mad-Eye Moody), can be seen in this December's highly-anticipated sequel as the villainous First Order leader, General Hux. Around the same time, he'll appear in two movies gunning for Oscar gold: Brooklyn , as an suitor wooing Saoirse Ronan's young Irish immigrant; and The Revenant , as one of the trappers who leaves Leonardo DiCaprio's Hugh Glass for dead after a brutal bear attack. Not bad for a dude mauled by a werewolf, huh?

Now that you feel sufficiently old reliving all those Harry Potter memories, let me cement it for you with this clip of Harry, Ron, and Hermione meeting for the first time in The Sorcerer's Stone. You're welcome. (Excuse me while I go start looking for grey hairs.)