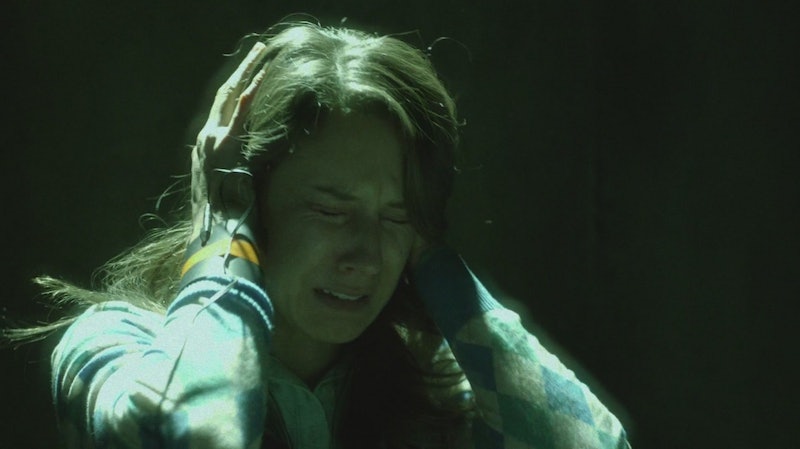 Remember when we all thought that the worst thing that could happen to the Liars was being trapped in Charlotte's dollhouse? Haha. We were so naïve. While Season 7 of Pretty Little Liars hasn't exactly made the Liars' time in dollhouse look like Spring Break, it has made Charlotte's "games" feel a little low-stakes. While the Liars were forced to fake-shock one another in the dollhouse, they're now dealing with the very real fact that they are all guilty of killing Dr. Rollins, and that some Uber A wants them dead to avenge Charlotte. The Liars may have mostly moved on from the dollhouse, but are the events of the dollhouse really in the past? A new promo for Pretty Little Liars episode "The Wrath Of Kahn" suggests that the answer is no way — but you may not have noticed the major clue within the promo's dollhouse scene.

In the episode "The Wrath Of Kahn," Spencer receives an e-mail with links titled "Spencer's Video." When Spencer clicks on the link, it appears to be a video from the dollhouse — specifically a moment that Spencer doesn't remember. The video shows Spencer leaning against a door in her "bedroom," a moment that we've seen before in dollhouse flashbacks. Or have we? Here's the screen shot from the new promo:

This scene may look familiar, but there's one huge difference between what Spencer is watching in Season 7 and what we saw back in Season 6, when Spencer was having a traumatic flashback to the dollhouse. Can you see the difference?

The scene is almost identical except for one crucial part: There does't seem to be any blood in this room, or on Spencer's body. Spencer is looking at her hands like she sees blood, but it doesn't seem to actually be there. What could this mean? Well, there are a couple of theories. The simplest explanation is that someone (likely Uber A) is showing Spencer that she was hallucinating in the dollhouse, and that she never actually hurt anyone. Uber A might be doing this so in order to make Spencer doubt her mind: while she may not have hurt someone, it's still pretty terrifying for her mind to hallucinate something so horrible.

Then there's another theory that could blow the top off of everything PLL. Reddit user Uber-A- noticed that it seems that Spencer has bangs in this video, and that she didn't have bangs in the dollhouse. It's worth noting that, according to Seventeen, actress Troian Bellisario didn't actually cut real bangs to play Spencer, which means that the show wouldn't have to work with Bellisario's real bangs for her to reshoot the scene — they could just remove her clipped-in hair. If the person in the video has bangs, it could mean that this video is of a Spencer lookalike — like, maybe, Spencer's twin?

It wouldn't be the first time in Season 7 that Spencer having a twin was brought up. In the Season 7 premiere, Hanna is visited by "dream Spencer" who helps her get out of Uber A's clutches. However, Spencer's actions are a little weird — she mentions the name "A.D.," whom Hanna has no idea about at the time, and asks Hanna if she's the one who killed Charlotte. Also, dream Spencer didn't have bangs. If this person really is Spencer's twin, perhaps she's working with A.D. in order to stir up trouble for her mirror image.

Hopefully "The Wrath Of Kahn" will clear up some of the questions we have about this video — because right now, it's totally blowing my mind.