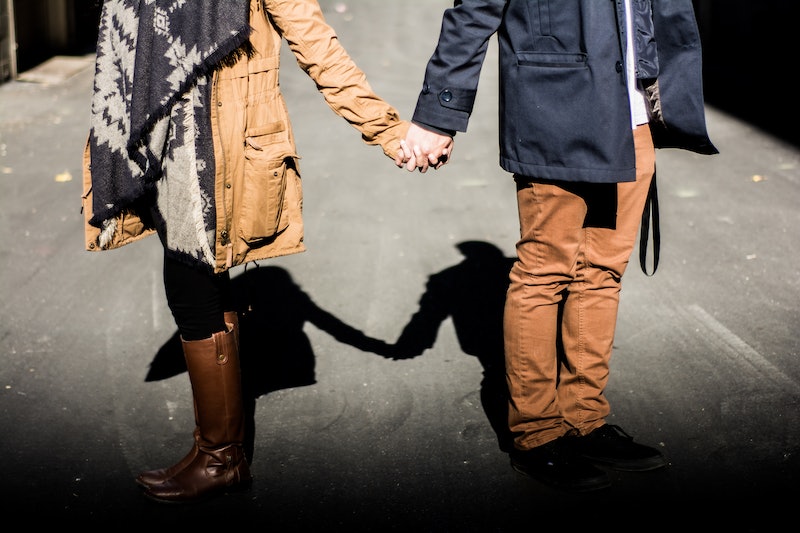 When you start dating someone new, it can be pretty tempting to assume you are long lost soulmates. You like the same music, have the same taste in movies, and really enjoy hanging out with each other. It all seems so perfect, and yet these types of shared interests aren't actually the best way to measure signs of compatibility with your partner.

While it feels great to agree on so many things, compatibility is about much more than having the same likes and dislikes. "Compatibility, in my clinical opinion, has a lot to do with how each partner would like to be treated," says Kim Chronister, Psy.D. in an email to Bustle. "Many times people think that compatibility has to do with preferred activities or personalities. We often see partners with very different personalities and very different hobbies being quite compatible."

This is evidence for the case of "opposites attract," and goes to show that you can find quite the perfect partner in someone who has wildly different tastes. It's a pretty eye-opening prospect — especially if you've long since thought your SO has to be your twin. With that in mind, read on for other signs that you're totally incompatible with your partner.

1. You Don't Know How To Argue With Each Other

Disagreements in a relationship are A-OK, as long as you both have a healthy fighting style. A compatible couple will hash out an argument rationally and without yelling or name-calling, Elliott D. Cohen, Ph.D. wrote on Psychology Today. An incompatible couple, on the other hand, might fight dirty or refuse to listen to each other. And that's obviously not a good mix.

2. Your SO Is Never On Your Side

Take note if your SO is quick to take everyone else's side, or seems to enjoy playing the devil's advocate. "Your partner should be your ride-or-die bestie, your partner in crime, and your biggest cheerleader all rolled into one," Alicia H. Clark, a Washington D.C.-based psychologist told HuffingtonPost.com. It's not a good feeling when they aren't, and it's likely not something you'll want to deal with long-term.

If you're high strung, pairing up with another high strung person can lead to a very turbulent relationship, according to Cohen. Stressed out individuals need a chill person to offer some perspective. Without that level-headedness thrown in, you two will probably drive each other mad.

4. Your Messiness Levels Don't Match Up

If you prefer pristine minimalism (with no dishes in the sink, ever), it might be kind of difficult to live with someone who sees right through clutter. "It sounds small, but over time it can build up into a huge frustration," said Claire Wexler, vice president of the matchmaking service Selective Search, in an interview with Zahra Barnes on Women's Health. Cue the argument of a lifetime over shared chores, or whether or not to have a yard sale. Totally not worth it.

This one might seem kind of frivolous, but having the same sense of humor is actually pretty important. "Life is hard; you’ll need someone in your corner who’ll roll with the punches and try to keep the mood light when the unexpected happens," marriage and family therapist Virginia Gilbert told HuffingtonPost.com. Not to mention, it makes moody sarcasm (or a lack of it) an OK thing.

6. You Have Different Ideas About Money

Again, it may not seem like a big deal early on, but ya'll want to agree when it comes to spending (or not spending) money. "Couples who are on the same page with their money and finances will usually find it easier going than those with wildly divergent spending behaviors," said John M. Grohol, Psy.D., on PsychCentral.com. Keep an eye out for signs that you and your partner just don't agree.

7. One Of You Is Always Running Late

This type of personality flaw can be cute early on, but punctuality problems can become a major point of contention for the wrong couple. "Whether you’re both always on time or running 15 minutes behind, having a synced-up sense of punctuality is a hint that you could work together," said Barnes. If not, one of you should get ready for a life of frustration.

8. You Feel More Insecure Than Not

A healthy relationship will leave you feeling secure and content, not worried or suspicious. If the latter is the case, it could be a sign of a lack of compatibility, Clark explains in the same Huffington Post article. The right person will give you the exact level of attention you need — and vice versa — so neither of you ever feel troubled.

9. Your Diets Are Vastly Different

As a vegetarian, I've dated meat-eaters and never had a problem with it. But diet differences can be a problem for some. “Things like one person being an adventurous eater while the other is very picky can become a bigger issue than you’d think," Wexler said. "And if one person has dietary restrictions while the other doesn’t, that can also cause problems down the road." It's up to you whether or not it's a deal breaker.

10. You Kind Of Hold Back When Talking

When you've found yourself a good match, you'll be able to say whatever the heck you want, and it'll be OK. But this simply can't be the case if you're with someone who is judgmental, or wishes you'd change, according to Clark. If that's true, it may be time to find someone more worthy of your attention.

11. You Move At Different Tempos

If you're the super chill type, it can be fun (and even a bit helpful) to date someone who's on the peppier side. And of course, vice versa. But sometimes mismatched life tempos can become a problem. "Some people are laid-back and let little get to them, while others take every one of life’s challenges to heart," Grohol said. If you two are constantly at odds in this area, it might be best to hit the ol' dusty trail.

After all, your SO doesn't have to be your twin, but they do have to be on your side. When you find someone who is most of the time, then you'll know you've truly found a compatible partner.