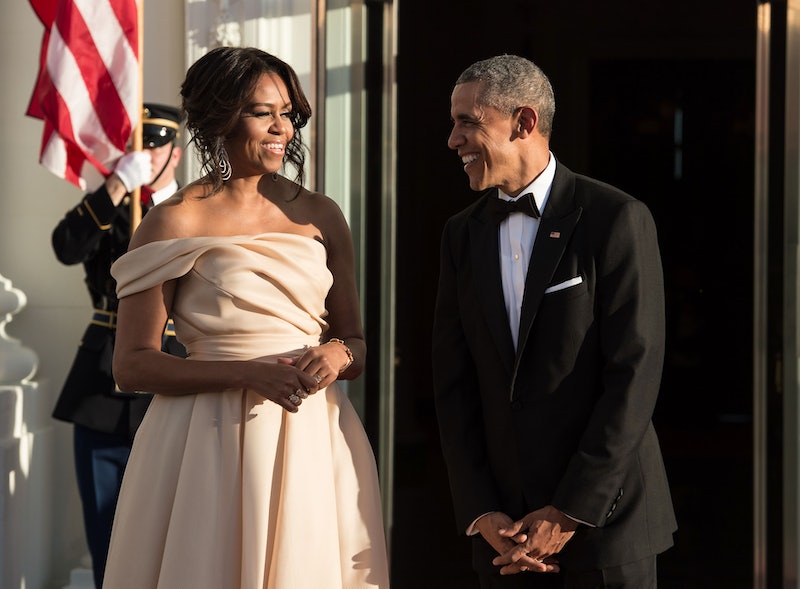 It's already common knowledge that President Barack Obama and First Lady Michelle Obama are relationship goals. But with the release of Southside With You , a creative retelling of the Obamas' first date, the First Couple worship is about to reach a whole new level. In Southside With You, a young Barack and Michelle, played by Parker Sawyers and Tika Sumpter, respectively, go on a tour of Chicago for their first date. But, how much of Southside With You is fiction and how much reality? While there is a lot that we do know about President Obama and the First Lady, there are plenty of things we don't, like the exact events of their first date. However, both the President and the First Lady have spoken publicly about that time, offering little snippets into their love story.

It's thanks to quotes from the Obamas about their first date that Southside With You was able to have one foot in true events. The basic facts revealed by the First Couple about the real date — the time (summer 1988), the place (Chicago) — were used as plot points in the film, but the rest is purely fiction. In doing so, writer-director Richard Tanne created a semi-biographical love story. Or, as he put it in an interview with Variety , "I was able to... use creative license to get the two characters connecting and clashing and falling in love." So, what has actually been said about their first date? Here are some crucial quotes from the Obamas about that day that will make you swoon.

Michelle Was Hard To Get

"I asked her out. She refused. I kept asking. She kept refusing." — President Obama

President Obama revealed that Michelle refused to go out with him at first, in an essay for Oprah.com. According to him, Michelle insisted that it would be inappropriate given their professional relationship (she was his advisor at a law firm). He wore her down in the end... by threatening to quit. (Classic Notebook move, dude.)

Art Is The Key To A Good First Date

"Art — guys out there, it impresses people," President Obama said in a 2012 campaign video, to which Michelle responded, "Yeah, he showed his cultural side."

On their first date, the Obamas took a trip to the Art Institute in Chicago, where Obama showed off his "cultural" side, and the two shared a romantic lunch in the courtyard before going on a walk. Sweet, cultured, very sophisticated — well played, young Obama, well played.

Do The Right Thing Was Key

"He was trying to show me his sophisticated side by selecting an independent filmmaker, and it ended up being a pretty good movie... really great," Michelle said in a short video message celebrating Do the Right Thing 's 25th anniversary.

After taking Michelle to the Art Institute and going on a walk, the future president then decided to take Michelle to see a new movie by a little known filmmaker named Spike Lee, Do the Right Thing. "Spike, thank you for helping me impress Michelle," Obama added in the same tribute video.

They Made It An All-Day Event

"We spent the whole day together. He was showing me all facets of his character... Showed all the sides, he was hip, cutting edge, cultural, sensitive," The First Lady said in a cute 2012 campaign video.

"On our first date, I treated her to the finest ice cream Baskin-Robbins had to offer, our dinner table doubling as the curb. I kissed her, and it tasted like chocolate." — President Obama

President Obama wrote in detail about his Baskin-Robbins, chocolate-flavored first kiss with his future wife, Michelle, for a piece on Oprah.com. In that same piece, the President also revealed that he never would have taken the job at Sidley & Austin had it not been for his mounting student debt. So, silver lining to all you guys out there taking jobs to pay back student loans.

May you meet your own Barack or Michelle soon.