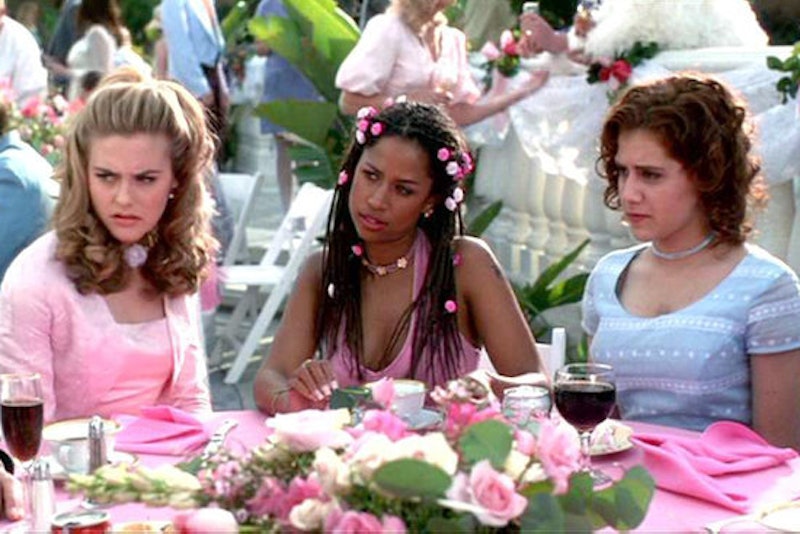 No matter how much many of us may cringe over our denim bucket hats and stirrup leggings, the '90s were still a wonderful time. They were filled with pop stars wearing platforms, kitschy plastic accessories, hairspray by the gallon, and embarrassing '90s hairstyles. While looking at feathered bangs and mullets decades later might make some of us want to rub our necks uncomfortably and go hide the old family albums, there were also some real gems in the beauty rotation.

Though you might not be so inclined to whip out your leftover tube of hair mascara or streak your bangs, it probably felt wicked cool doing it when you were eight. That's why we can make a case for celebrating them loud and proud today — no regrets, people. These were the looks that made us stars on the playground way back when.

If you were just as in love with your disposable camera as you were with your Walkman, chances are you have proof of some of your most favorite hairstyles — and if you don't, I've got the photos to remind you. From velvet scrunchies that were as big as your face to piecey hair buns that had a vague Clueless feel to them, these were the looks so many of us experimented with. Below are 11 embarrassing '90s hairstyles we were totally obsessed with.

This was a popular look on the playground: All you had to do was gather up all your hair to the very center of your head, pop a statement scrunchie around it, and then let your strands sprout like pineapple leaves. It was the epitome of chic, in '90s standards.

If you were just as in love with the Spice Girls as you were with your first grade school crush, then chances are you copied Scary Spice's kitty buns at one point or other. They probably gave you a trendy, feline vibe, which only upped the appeal. Even back then, we were all obsessed with kittens.

Why wear a thin, plastic headband to class when you could up the ante and basically wear ear warmers? Bonus points if you wore kitschy dangling earrings that could accent the look.

A swept-up 'do or a casual ponytail was never complete without very thick, very chunky face-framing pieces. I'm not talking about a few choice strands here, no. Instead, we went all-in with about a quarter of our hair sultrily accenting our faces.

No self-respecting '90s kid wore their pigtails low behind the ears. It was all about the volume and the swing, so those scrunchies were gathered way on top of the head for a sassy, bouncy, classroom-ready look.

Another popular pony look was a clever variation on the "pineapple head." This one involved skewing the tail to either the left or right, while accenting the string of hair with your biggest, most favorite scrunchie.

Slicked-back hair thrown into a knot was the name of the game, but the important pièce de résistance of the look was to have spiky end pieces that popped out like a halo around our heads. To really file those ends down, many of us dipped into a generous supply of gel to give them that toothpick-sharp edge.

If you weren't blessed with long enough hair to pull that off, then that was where faux-hair scrunchies came in. You got bonus points if the shade of the plastic hair didn't exactly match your own — that way girls knew you were rocking one of the fab drugstore pieces.

If you had bangs in the '90s, then more power to you. But the real way to go was to fake some fringe. A particularly fresh approach to it was to swoop your hair across your forehead and clip it back behind your ear, while leaving a thick chunk of hair to "frame" your face on the side. Tween fashions, man. They were always a head-scratcher.

Whether you subscribed to butterfly clips, plastic barrettes, or decorative braid pins, most of us went gaga when hair accessories were involved. One was just fine for a demure day, but if our moms had any say in the matter, most of us would show up with a Marie Antoinette-like 'do, heavy with all the clips in all the land.

Unfortunately, we weren't as cognizant of cultural appropriation back then, so many of us rocked this look. How come sticking forks in our hair never became a thing?

I don't know about you, but gel was the first hair product I ever got my hands on. And because it was the first time I tried to do anything with my poof of locks, I used way too much, made my 'do incredibly sticky, and loved every moment of it. I felt like an Olsen sister walking around with up-do's that consisted of random twists and curls, strategic hair pieces sticking out in all angles, and barrettes decoratively clipping back any bumps or frizz.

Most of us shudder now, but Marc Jacobs brought the look back last season in his SS16 show. So yeah, we were onto something.

Even though you might not ever want to wear any of these looks again, you have to admit they were pretty rad when we tried them out as kids. Now, only one question remains: What trends from 2016 will make us shake our heads in 2030?