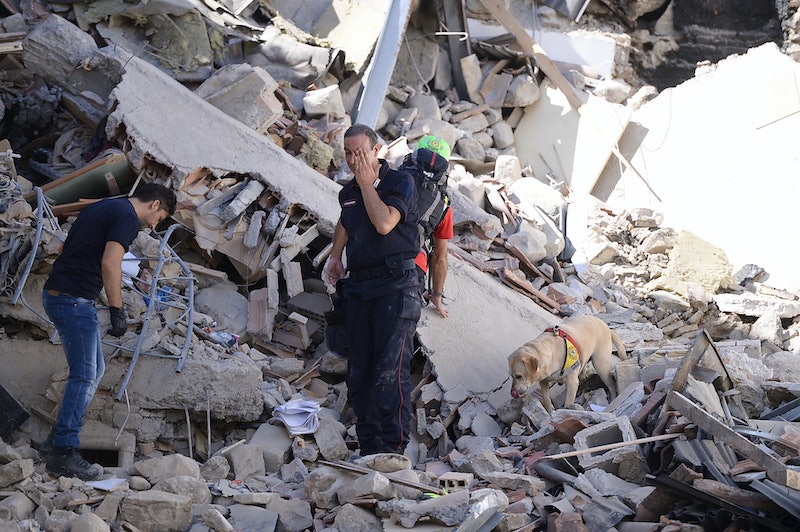 An earthquake struck a central region of Italy on early Wednesday morning. The devastating quake occurred over a mountainous stretch in Amatrice, Italy, leaving at least 38 people dead, The New York Times reported. These before & after photos of the Italy earthquake show just how destructive this was for the town of Amatrice and the surrounding areas. Update: The death toll has continued to rise throughout Wednesday and is expected to continue doing so. You can research ways you can help here.

Earlier: There were approximately 41 quakes over a three-hour period, the Times reported. The first, which struck at 3:36 a.m., was a 6.2-magnitude earthquake; a 5.5-magnitude temblor struck less than an hour later at 4:33 a.m. Countless victims were trapped under debris and the impact of the quakes could reportedly be felt all the way in Rome, approximately 100 miles southwest of Amatrice, the Times reported.

There are plenty of ways to help the victims of the earthquake in Italy, whether donating to the Italian Red Cross or simply checking in with loved ones who were visiting or living in the area. Moreover, people have been sharing "Pray for Italy" memes and tweets on social media to show their support for all those affected by the earthquake.

The aftermath of the Italy earthquake is tragic, and these before and after photos show the destruction the quake has caused on the area:

The before and after photos of the Italy earthquake are jarring.

The search for victims continued well into the next day after the quake struck the town of Amatrice and its surrounding areas, and the death toll is likely to rise in the coming days, the Times reported.