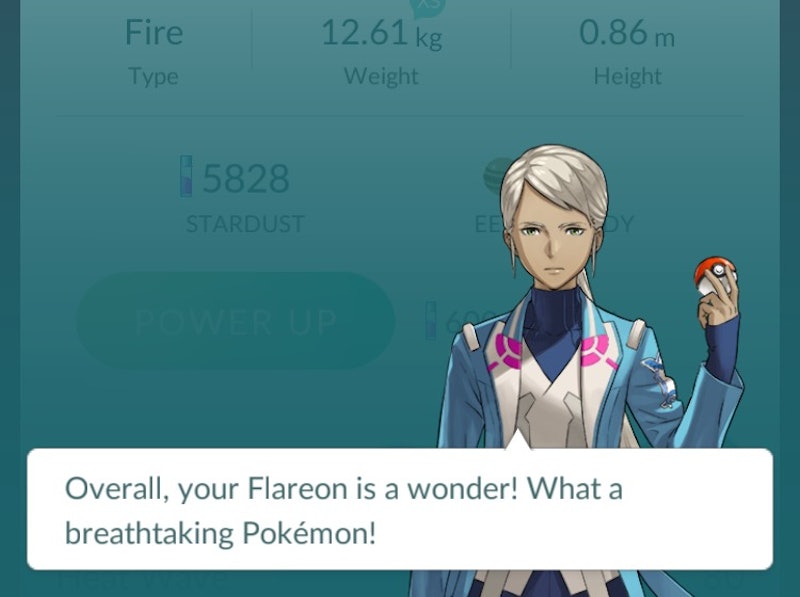 Guess what I woke up to this morning? A brand new “Pokemon Go” update! This one doesn’t have quite the heft that the Aug. 8 update did, but it did prompt me to ask myself one very particular question: What is Pokemon Appraisal in “Pokemon Go,” exactly? It’s the only new feature — the other part of the update simply fixed a bug that kept defeated Pokemon at one HP — so it must be an important one. Right?

Given that Niantic teased player interaction with the three Team Leaders as a possible future feature during the “Pokemon Go” panel at San Diego Comic-Con last month, the arrival of Pokemon Appraisal isn’t unexpected — and indeed, this particular method of interaction does sound like it has the potential to be quite useful. According to the update’s release notes on the iTunes App Store, “Trainers will now be able to learn about a Pokemon’s attack and defense capabilities from their Team Leader (Candela, Blanche, or Spark) to determine which of their Pokemon have the most potential for battle.” The best part, though, is that you don’t have to be at a gym in order to appraise your Pokemon; the option is available right from each Pokemon’s menu in your collection.

To use Pokemon Appraisal, all you have to do is tap on the big ol’ Pokeball on the map screen to open the main menu, then tap “Pokemon,” then select the Pokemon you’d like to appraise. Once the Pokemon’s profile has been brought up on your screen, tap the menu button in the lower right hand corner (the one that looks like three lines stacked on top of each other) and select “Appraise”:

I’m a member of Team Mystic, so I get my Pokemon analysis from Blanche. From what I’ve seen so far, she’ll usually have one of three or four types of responses to your Pokemon: Very impressed, mildly impressed or pseudo-impressed, and not very impressed at all. For example, she digs my Flareon:

She thinks my Ponyta is pretty OK:

And that my Dodrio is “above average”:

But she is… shall we say, not optimistic about my Clefairy:

She might also have more types of responses than that; I just haven't personally witnessed them yet. So, y'know... do with that what you will.

When giving her analysis, Blanche will typically comment on each Pokemon’s best attribute and how good its overall stats are. Occasionally, she’ll also throw in something about its size: My Flareon, for example, is “tinier than any we have on record. Astounding!” while my Butterfree is “colossal. This is indeed exceptional. Fascinating!”

I haven’t used the Pokemon Appraisal feature to prep for a gym battle yet (and to be honest, I probably never will — the idea of fighting other Pokemon makes me anxious; I’d much rather just run around catching ‘em all), so I can’t speak to whether or not it actually helps prepare you for a fight. Even without the gym aspect, though, it’s kind of fun to be able to see how your Pokemon measure up in the grand scheme of things; given that it was also previously somewhat difficult to determine whether your Pokemon was good or not, the feature is a welcome addition.

To get the feature and start appraising your Pokemon, make sure you’ve got the latest version of “Pokemon Go” installed (for iOS, it’s version 1.5.0, while for Android, it’s 0.35.0). Happy battling!