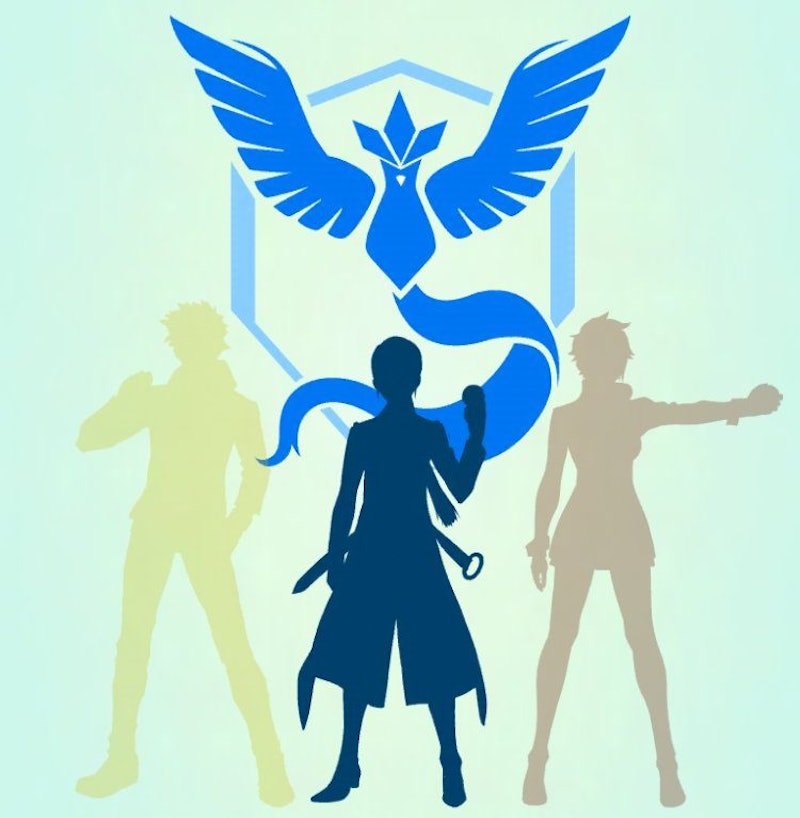 It’s happened. After hours spent pounding the pavement in search of Pokemon, you’ve finally been asked to pick a team in “Pokemon Go.” But which do you pick? Team Valor? Team Instinct? Team Mystic? Honestly Team Mystic kind of seems like the coolest, but what are the signs you’re definitely Team Mystic in "Pokemon Go?" How will you ever decide?

Then you remember: With logic. That is how you will decide. With cool, calculated logic. And, indeed, the fact that this is your thought process definitely indicates that Team Mystic is in your future.

No doubt you’re already familiar with the whole team mechanic in “Pokemon Go,” but just in case you’re not, let’s back up and take a look at a little background information. Here’s the deal: Once your Trainer reaches level five, you’re given the opportunity to train at gyms — but before you do that, you have to pick a team. Each team is governed by different principles; Team Valor values fierceness in battle, Team Instinct the power of following your gut impulses, and Team Mystic the research behind the fighting techniques. They’re headed up by Professor Willow’s assistants: Team Valor by Candela, Team Instinct by Spark, and Team Mystic by Blanche.

Team Mystic’s approach to Pokemon training is as academic as it is practical, and its mascot is the Articuno . In fact, I actually find the team’s name to be kind of a misnomer; the word “mystic” implies a certain amount of vagueness, something grounded not in research, but in the powers of the great unknown. But then again, if magic is science, then maybe the title of Team Mystic makes more sense I first thought: Says Blanche to players when the moment comes for them to pick their teams, “The wisdom of Pokemon is immeasurably deep. I am researching why it is that they evolve. My team? With our calm analysis of every situation, we can’t lose!” Hear, hear!

Although right now, which team you pick doesn’t change your gameplay, I have hopes that future updates to “Pokemon Go” might make the choice more dynamic. After all, once you’ve picked your team, you can’t change your mind — and maybe it’s just me, but I kind of feel like that should count for something.

So are you Team Mystic material? Well, the nice thing about “Pokemon Go” is that you can decide for yourself; you don’t have to wait for some sort of sentient piece of headwear to determine who you’ll be for the rest of your life. But if any of the following sound like you, you might think about giving Team Blue a shot.

Feathers or otherwise. You take pride in your ability to keep a cool head about you, even during times of extreme stress. This doesn’t mean that you’re unemotional; it just means that you recognize you’re not at your best when you fly off the handle. You’re excellent at rolling with the punches, whether they’re coming from a Vaporeon or your actual life.

And you were probably really good at it, too. But it wasn’t just about making the grade (although you definitely had no trouble there); it was about making new connections and broadening your horizons. Facts are just facts; it’s what you do with them that matters. And nobody knows this better than Team Mystic.

3. You Ask A Lot Of Questions

And then you set right out to try to find the answers. But you also know that the answer itself isn’t necessarily the important part; how you get there is just as meaningful.

4. You Approach Problem Solving From A Position Of Logic

You gather any and all necessary information before making a decision, and you weigh your choices carefully.

And you usually follow it up with, “Let’s find out.”

Anything and everything: Books, newspapers, magazines, the internet — you’re never without something to read close at hand. You’re constantly assimilating new information, thanks to all the reading material you carry with you wherever you go… and you’re never bored, either. You learned that lesson early on.

As Bustle’s Claire Warner recently noted, the three “Pokemon Go” teams seem to correspond roughly to the Hogwarts Houses in Harry Potter: Team Valor is Gryffindor, Team Instinct Is Hufflepuff, and Team Mystic is Ravenclaw. (Meanwhile, opportunistic Slytherins will find a place with whatever team they think will help them out most in the long run.) If you always thought you'd be a Ravenclaw if you got your Hogwarts letter, odds are you're an excellent candidate for Team Mystic, too.

8. You’re Not Afraid To Fail

If we never made mistakes, how would we learn?

9. Your Wardrobe Is Full Of Badass Coats

Never underestimate the worth of a good trench coat.

10. You Believe In Being A Part Of Something Bigger Than Yourself

According to research by Adobe Digital Insights, Team Mystic is far and wide the most popular team in “Pokemon Go”: 43 percent of players have pledged for it, while only 32 have pledged for Team Valor and 25 percent for Team Instinct. But while some might see signing up with Team Blue as the mark of a follower or a mere drone, there’s another way of looking at it, too — a way that remembers that a chorus is made up of many voices, and that each new voice makes the chorus stronger. If you share the same goals, you’re all on the same team, which can be quite valuable, indeed.