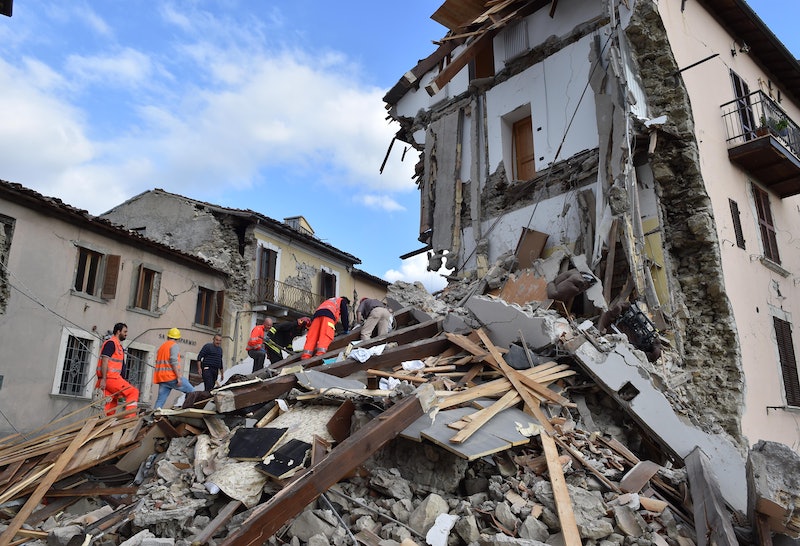 Residents of small towns in central Italy were awoken by a 6.2-magnitude earthquake in the early morning hours on Wednesday. The shaking stretched across three Italian regions — Umbria, Lazio, and Marche — and continued for hours, with more than 40 aftershocks registered. But most of the damage and confirmed deaths were in three small mountain towns, all of which are popular with Romans on holiday trying to escape the summer heat. What was damaged in the Italy earthquake? The towns of Amatrice, Accumoli, and Arquata del Tronto are nearly unrecognizable.

The before and after pictures of the Italy quake are jarring. Buildings along one side of Amatrice's main street lie in rubble. Rescue workers and residents are making their way through the rubble trying to find survivors. One structure that can be seen standing is the town's 13th-Century clock tower, and the clock's hands are stuck at 3:36 a.m., the time that the first and largest quake struck. Amatrice Mayor Sergio Pirozzi summed up the situation to RAI-TV, Italy's public broadcaster: "The town is no more." Of the estimated 73 dead as of Wednesday afternoon, about 35 were from Amatrice, Pirozzi told Sky News.

In addition to the homes and businesses destroyed in Amatrice, at least one piece of cultural and artistic heritage was severely damaged: the Church of Sant'Agostino, a medieval structure. Photos show that the entire upper half of the church has caved in. Inside were priceless statues and paintings from the 15th Century.

The situation was not better in nearby Accumoli, The Guardian reported. That town's mayor told RAI-TV that things were much worse than he first imagined. "Now that daylight has come, we see that the situation is even more dreadful than we feared with buildings collapsed, people trapped under the rubble and no sound of life," he told the channel.

Video of Pescara del Tronto, part of Arquata del Tronto, shows that much of the town has been reduced to rubble. The Italian police and emergency response teams have released helicopter video and images of some of the most damaged areas. Whole blocks have been leveled. Mayor Aleandro Petrucci confirmed as much to the BBC. "The village isn't there anymore. Almost all the houses in Pescara del Tronto have collapsed," he said.

Italian Prime Minister Matteo Renzi spoke to the nation at about noon local time. For now, he is focusing on the rescue efforts. "From now on we will make sure that we won’t leave any families or communes on their own. And it will really work, because in the next few hours we can save human lives from the rubble and give hope to those territories that have been so badly affected," he said.

Now the only thing to do is wait for rescue workers to do their best to save as many people as possible. The BBC reported that rescue dogs were on the scene looking for people trapped under the rubble.