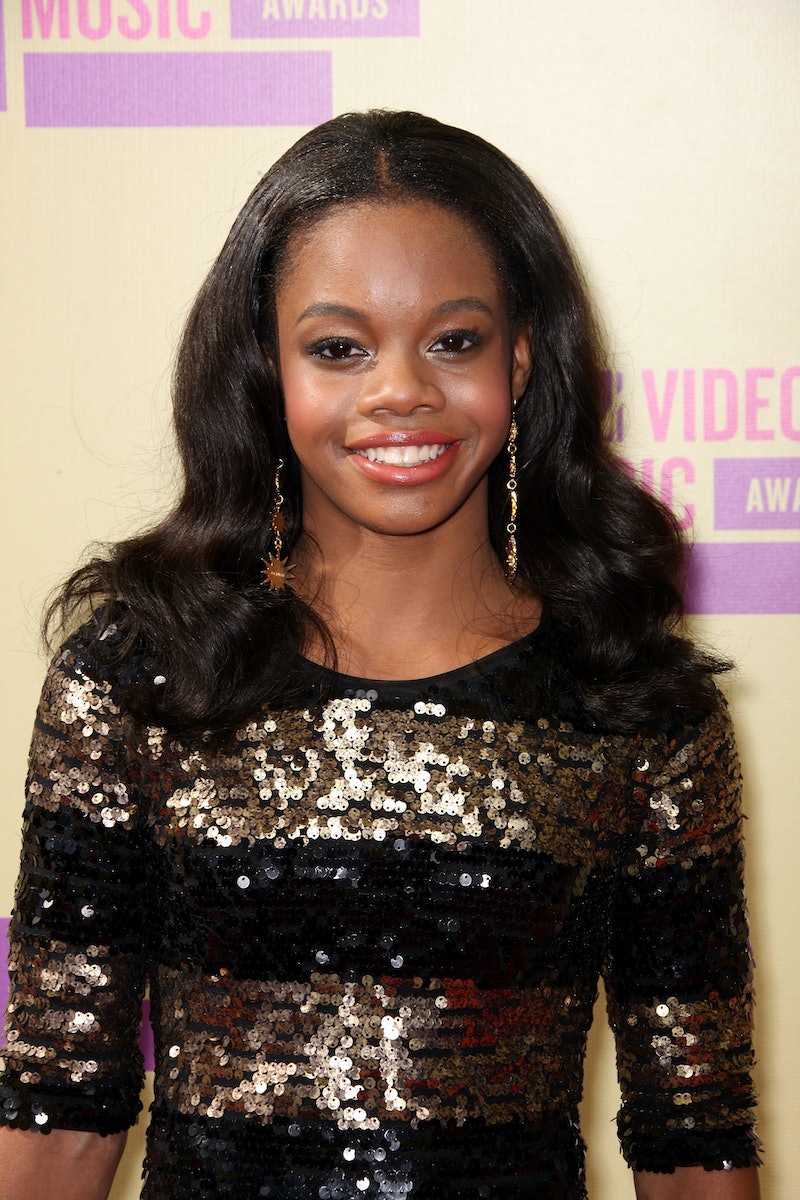 Four years ago following the London 2012 Summer Olympics, Team USA gymnast Gabby Douglas performed a series of cartwheels and flips on stage while Alicia Keys performed her, at the time, newest single "Girl On Fire" — and then Nicki Minaj brought in a customized version of her rap verse from the song highlighting Douglas' achievements. To say it was a fire moment is slightly underselling it — honestly, I'm tearing up a little bit just thinking about the performance. Plus, now I'm wondering: Will Gabby Douglas be at the 2016 VMAs for a repeat performance? Update: On Aug. 25, MTV announced in a press release that Douglas will be a presenter at the 2016 VMAs. Update 2: Douglas tweeted on the day of the show that she would no longer be attending as she had recently been released from the hospital.

Earlier: Well, Douglas has yet to officially confirm whether she'll appear at the VMAs this year. That said, she is currently on a post-Rio Olympics celebration tour of sorts, appearing on a number of talk shows along with her fellow "Final Five" U.S. gymnastics team members: Simone Biles, Aly Raisman, Madison Kocian, and Laurie Hernandez. In the week leading up to the VMAs, they joined the TODAY Show as well as The Tonight Show Starring Jimmy Fallon — both of which are filmed in New York City. It would seem that Douglas and her gold medal-winning team members were in the neighborhood just days before the VMAs kick off at Madison Square Garden, so I have a feeling they'll make an appearance.

Plus, there is precedent since 2012's "Fierce Five" from the U.S. gymnastics team — which included Douglas, Raisman, McKayla Maroney, Kyla Ross, and Jordyn Wieber — appeared at the VMAs that summer, where they walked the red carpet in style after being named All-Around Women's Gymnastics Champions at the London Olympics. So, with the Final Five making the most of their time in New York City as they hang out with Usher and catch a performance of Hamilton — seriously, I'd be burning with jealousy right now if these ladies weren't so talented and wonderful — why not add a VMA appearance to the list?

Now, as for whether or not Douglas may take the stage for a repeat performance, that's probably a little less likely. Certainly, I would love to see Douglas make an appearance during the performance Beyonce is rumored to be doing during the VMAs, but I'm trying not to get my hopes up too high in case it doesn't happen.

Still, even if Douglas simply walks the red carpet — alone or with her Final Five teammates — and/or presents an award during the ceremony, it will be fun to see her at the VMAs again. But, we'll have to wait and see if it actually happens. As for me, I'll be holding out hope for that Gabby Douglas/Beyonce team-up, which is the only thing that could come close to topping the 2012 "Girl On Fire" performance.