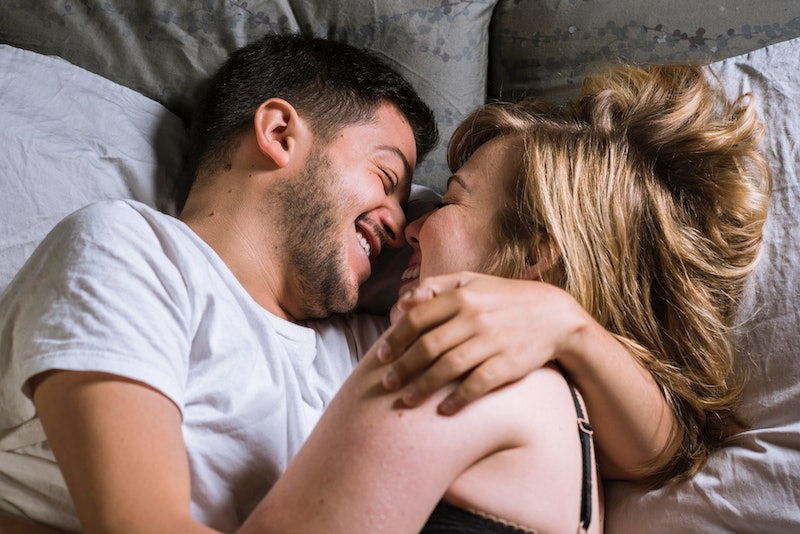 Not every couple wants to float along the road to marriage, but for those who do, knowing when to actually start heading that way isn't always clear. There are so many different things to think about, like how you share your money, how you get along with each others' friends, and whether your future dreams and plans align with one another. It can sound like a stressful thing, but if you're right for each other, marriage won't feel like something that belongs in a horror movie. It'll be something that feels right to the both of you.

Although we're not getting hitched at the same rate that our parents and grandparents were, it wouldn't be fair to say that our generation is completely disinterested in the concept of marriage, either. In 2013, four of every 10 marriages were between people where at least one half of the couple had been married before. And women with a college education have a much higher likelihood of making it last with their spouse; research shows that almost 80 percent of women with a college degree or higher will see their marriage last for at least the next two decades.

So the odds just might be in your favor. Now it's time to find out whether your current SO is the one who will go the distance with you. Here are the nine weirdest signs you're ready to get married.

1. You Don't Get Envious At All When You Listen To Your Friends' Wild Dating Stories

If you're not totally content in your relationship, it's perfectly normal for you to experience a twinge of jealousy when your friends relay entertaining stories about their dating life. However, if you make up half of a super-committed couple, there's a lot less chance that these stories will give you anything to be jealous about. In fact, you might feel relieved that's all behind you.

2. You're In Regular Contact With Each Other's Family Members

When you're in touch with your partner's mom or sister on a regular basis or play Words With Friends with your boo's dad, that means that you've got a good enough relationship with each other's family to eventually consider each other family. If you're flirting with the idea of marriage, you'll definitely run into plenty of scenarios where you have to be in constant contact with one another's relatives, so this is a sign you're already off to a good start.

People who aren't really into the whole marriage thing tend to roll their eyes when their Facebook friends post pictures of their new engagement. But when you see someone has popped the question, whether it's a coworker or a celeb, and you feel all warm and fuzzy inside, you're probably ready to move from girlfriend status to engaged.

4. You Can Joke About Each Other's Exes Without Jealousy

When you're in the beginning phases of a relationship, the last thing you usually want to do is open the ex-files; there's nothing about your SO's ex that is funny or amusing. If anything, they might even feel like a little bit of a threat. Once you've moved past all that, though, you'll find that being completely comfortable with each other also means it's easier to have a laugh about the people who came before you. There's nothing to worry about anymore, so you can tease your partner about how their last girlfriend bought him all those fedoras.

5. You Act Civilized Around Friends When You're Mad At Each Other

Spoiling your time in public just because you're momentarily unhappy with each other is a pretty immature thing to do. Your friends don't deserve to have an bad time, even if you're fuming at each other about something that happened at home earlier. Plus, it's out of respect for each other that you don't let your anger loose in a social setting — you don't want your friends to get all defensive and angry on your behalf, because you want your friends to like your boo for years to come.

Money is the number one thing couples get mad about. It's a touchy subject, and a lot of things in our lives revolve around money, so if you're not on the same page, your lives probably aren't going to align so easily. However, if you're past the point of counting how many dollars you each spend on your relationship, that's a sweet sign of longterm compatibility. Even more solid? You already have a joint credit card for shared expenses.

7. You Don't Get Grossed Out If You Hear Them Pooping

Admittedly, pooping with the door open isn't a habit you should necessarily cultivate in your relationship, but if this sounds familiar to you, it's not a bad thing. As nice as romance can be, there needs to be an understanding of reality if you're entertaining the idea of marriage. That means you've got to be OK with the fact your partner poops, and vice versa. Plus, there might be an urgent matter that you have to quickly talk about when they're on the pot — NBD.

8. When You Get Into An Argument You Try To Solve It Instead Of Running Away

You'll never reach some magical relationship nirvana where you never fight anymore. (What fun would a relationship be without makeup sex, anyway?) But the way you bicker says a lot about your likelihood for ever-after. Turning away in a huff and threatening to leave when things have gotten rocky isn't a good quality. If you show your love by showing up, listening, and being willing to work things out — even when your impulse in the past has been to run away — that's some seriously committed behavior.

9. You Know They Won't Be Able To Give You Everything You Want In Life

There are way too many unrealistic expectations floating around when it comes to the idea of marriage. We want our spouse to be our best friend, our most trusted confidant, our emotional rock, and the person we share all our favorite hobbies with. The truth of the matter is, you won't ever find a person on the planet who will give you everything you want in a companion. That's just the human condition. If you've already come to terms with this fact and still want to be with your SO all the same, you might just be ready to get hitched.

More like this
The Best Time To Date After A Breakup, According To Experts
By Bustle Editors
Expert Tips For Being On Top When You're Plus-Size
By Lexi Inks
The Top Mistakes Scorpios Make In Relationships (& How To Avoid Them)
By Nina Kahn
What Is The Forest Personality Test? The TikTok Trend, Explained
By Georgina Lawton
Get Even More From Bustle — Sign Up For The Newsletter