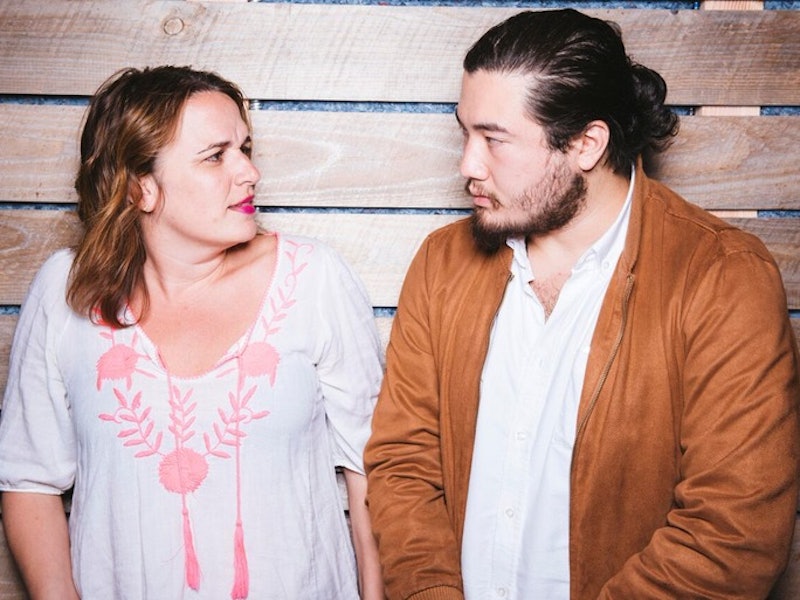 We’re always hearing that we could be having better sex, a better orgasm, or a better relationship. But how often do we hear the nitty-gritty of how we can actually better understand our deepest desires and most embarrassing questions? Bustle has enlisted Vanessa Marin, a sex therapist, to help us out with the details. No gender, sexual orientation, or question is off limits, and all questions will remain anonymous. Now, onto today's topic: the most common things couples fight about.

Q: “Since you're a couples counselor, I wanted to ask — what are the most common things people in relationships fight about? I know fighting is to be expected to some degree, but I'm just wondering if the stuff my partner and I fight about in our relationship is normal or not. I know you mostly work with people on sex, but I have a feeling a lot of other stuff tends to come up too when you're talking about that. What have you realized are the most common issues people get angry about?"

A: Thanks for the question! Nobody likes fighting, but it’s a pretty unavoidable aspect of being in a relationship with another person. Here the 10 of the most common things couples fight about, in my experience counseling them as a sex and relationships therapist.

Let’s start off with the big three: sex, money, and kids. These are not only the topics that couples fight about most frequently, but also the most common topics that break couples up.

There are so many different fights that couples can get into when it comes to money. You might fight over what to spend money on, versus what to save money on. You might have different ideas of what things “should” cost (“you spent 30 bucks on coffee beans?”), or you might judge each other for your purchases (“you bought another dress?”). One partner might be more of a spender while the other is more of a saver. You might argue about whether or not to combine your finances, how to create a budget, how to manage your money, or how to save for the future. Super common.

But the fun doesn’t stop there! When the child is born, a whole new set of fights develop. Couples can get into a lot of conflict about how to raise the child. One partner tends to be more of the “authoritarian” while the other parent gets to be the “cool parent” (Can't help but think of Amy Poehler's character in Mean Girls). You might fight about who is spending more time with the kids, or doing more child-related chores.

A lot of couples argue about the major milestones in their relationship. Based on what you and your partner both want out of your relationship, you might argue over when or whether to become exclusive, when to move in together, when to meet the parents, when to get engaged, when to get married, when to combine finances, and when to buy a house. Although a lot of these milestones can be really joyous occasions, you might feel like you’re on pretty different timelines — and fight about it.

Sometimes the ways you spend your time together can cause fights too; one person wants to watch the basketball game while the other person wants to get outside and go hiking. Or you might get upset that your partner is on their phone the entire time the two of you are hanging out together.

Even after the honeymoon period wears off, couples still want to have passion in their relationship. Your partner might get frustrated that you don’t plan romantic dates or don’t surprise them with flowers or little gifts. Maybe they’re always pushing you to write them love notes or poems, or get gussied up for date night. Or maybe you forget an anniversary one year.

Unlike quality time, it’s no surprise that chores are one of the biggest triggers for fights. One person almost always feels like they’re carrying more of the load than the other. You might get upset that you’re always the one taking the trash out, while your partner finds increasingly-creative ways to balance more and more trash in the bin. You might also have wildly different ideas of what cleanliness means. You might not be bothered by a few dirty dishes in the sink, whereas those same dishes might send your partner into conniptions.

We all have tiny things about our partners that annoy the hell out of us. When we first started dating, these types of things weren’t a big deal. Sometimes they were even cute! But there’s something about getting into a committed, long-term relationship that makes pet peeves start to drive us crazy. We’re talking stuff like compulsive leg shaking, burping, snoring, farting, eating the last cookie, and the classic — leaving the toilet seat up.

Parents can play a surprisingly large role in your relationship, even if you’re not married. You might argue about when to meet the parents, or how often to go visit. The holidays almost always bring up tension — “my parents will kill me if I miss Thanksgiving!” “But we spend Thanksgiving with them for the last two years! It’s my parents’ turn!” There may also be times when you feel like your partner is siding with their parents over you.

No one likes to own up to the jealous little monster that lurks within each of us. Sometimes we have a reason for feeling jealous, like the fact that your partner is still really close with their ex, or that your partner cheated on you in the past. Other times it’s just your own insecurity surfacing — “are you sure you don’t think that girl is prettier than me? I swear I saw you staring at her!” We can even get jealous of our partner’s friends, family members, coworkers, or pets. You could even be jealous because you're non-monogamous, and that's also totally legitimate.

I’m not sure if you’re worried about the fighting in your relationship. Fighting is an unavoidable part of relationships, but it can be tricky to sort out when it crosses the line into deal-breaker. It can be helpful to look at your fighting patterns in terms of quantity and quality. If it feels like you guys are fighting more often than not fighting, and that you guys are fighting dirty, you’re probably not a good fit. If you fight every once in awhile and do it relatively skillfully, you’re probably fine!