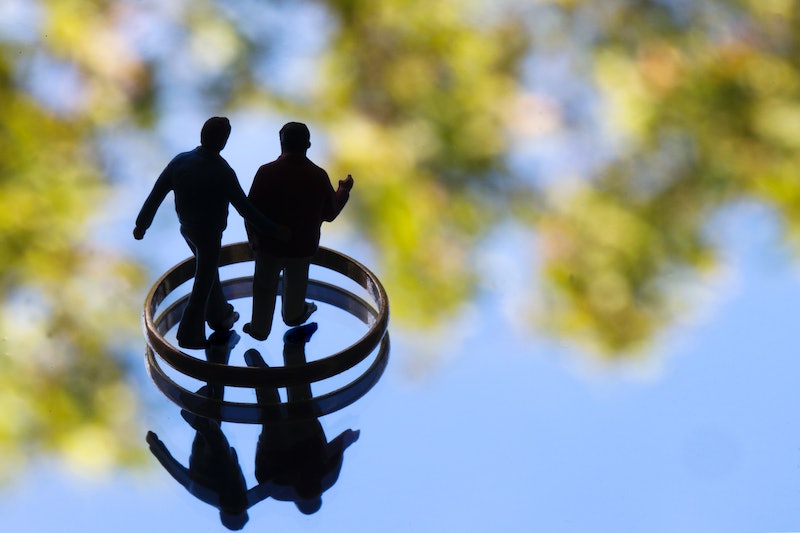 If your parents are wondering why you're still single and you're having a hard time explaining to them that you don't even want to get married anyway, you could always just tell them that even the Washington Post understands that you're not getting hitched. According to a recent article, parents of Millennials should accept their kids won't get married. Or at the very least, that it will be a long wait.

Aside from framing the issue for parents of Millennials, rather then millennials ourselves (hi, we read, too, thanks), the article doesn't get too judge-y about the issue, which is nice, given the amount of Millennial hating that always seems to be going around these days. It does, however, make very clear that society is changing. Personally, I'm not too worried about that — though then again I am one of those silly Millennial people. But really, when you look at the reasons Washington Post gives as to why the marriage rate might be dropping so much, it's hard to see this as a bad thing.

Their three main explanations for the drop in marriage rates are: that Millennials delay marriage until later in life due to "economics, education, and preference"; that Millennials are less religious; and that Millennials have more options besides marriage. And are we really going to say that people should rush into marriage despite their financial situation, the fact that they haven't finished their education, or the fact they don't feel ready? That people shouldn't feel OK believing whatever they want to believe? That we should bring back the judgmental social stigmas against living with someone before you get married, or having kids together without getting officially hitched?

Because I'm totally OK with things the way they are, thanks.

1. Fix The Cost Of College And The Student Debt Crisis

A college degree is increasingly required for most jobs, but the cost of college is out of control, leading to kids taking out tons of loans and starting their adult lives in a mountain of debt. Most people I know in my generation think that marriage is an important decision, and so want to make sure they have their lives sort of figured out before they get married. Having a bunch of debt makes that more challenging.

The wealth gap in this country is ridiculous, and the buying power of the federal minimum wage has declined in recent decades, not to mention the economy is still not what you'd hope. All of which means Millennials are more financially insecure than their parents, which in turn means we feel less confident making other big life decisions, like marriage. After all, how can you think of starting a life together — let alone spending a ton of money on your dream wedding — when your life still feels so unstable and unpredictable? How can you be ready for marriage when you still haven't even managed to get your finances in order?

Millennials are overwhelmingly in favor of same-sex marriage, and the fact that so many people say that marriage shouldn't include LGBT people just makes the whole thing seems so irrelevant and outdated. Plus, letting LGBT people get married means that a whole lot of people who couldn't get married before will now get married. That's a boost in the marriage rate right there.

Millennial women want careers. Even if we already know we want to get married and have a family, we still have other ambitions for our lives as well. And in today's world, the general impression you get is that settling down and having kids will hold you back as a woman — and that no one is going to make it any easier, either. Is it any wonder most women want to wait until they're more established in their career for any of that stuff? And given things like the glass ceiling and the gender pay gap, is it any wonder that can sometimes take a long time?

So if you want more Millennials to get married, maybe start by taking down some of those road blocks.