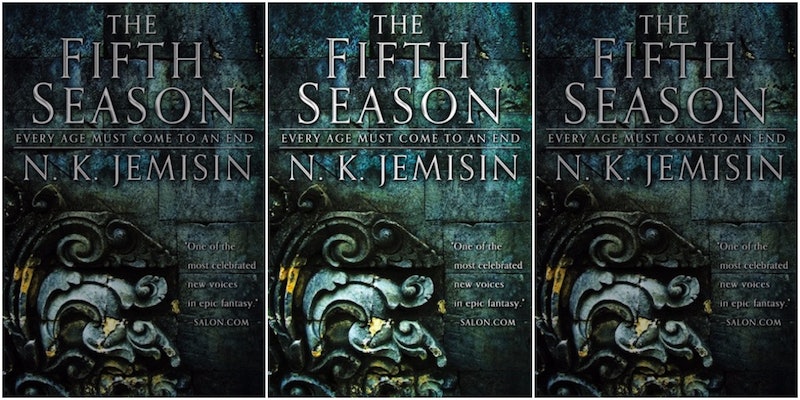 When the 2016 Hugo Award winners were announced last week, writers and readers took to Twitter to congratulate the recognized authors on a job well done. But, as her publicist later told her, N.K. Jemisin is the first black author — and first woman of color — to win the Hugo for Best Novel. There's no way to understate how huge this moment is.

Jemisin took home one of science fiction and fantasy's most prestigious awards for The Fifth Season : a post-apocalyptic allegory of race relations in the U.S. The 2015 novel is the first installment in The Broken Earth Trilogy. Jemisin released a sequel, The Obelisk Gate , on Aug. 18.

The Fifth Season takes place on a continent called the Stillness, which frequently experiences earthquakes and other geological mishaps, known as Seasons. A small percentage of the Stillness' population are orogenes: people with the ability to control the thermal and kinetic energies that drive the Seasons. The average folk fear the orogenes, because of their immense and misunderstood powers, and so orogenes face a difficult decision: register with the Empire and go to live in the brutal Fulcrum, or risk being lynched if they are discovered in the world at large.

Jemisin's novel focuses on three female orogenes: Damaya, a newcomer to the Fulcrum; Syenite, a secret-finder who may be forced to breed with her mentor; and Essun, a mother in pursuit of her murderous, child-kidnapping husband.

To be clear, Jemisin is not the first black writer or woman of color to win a Hugo. Kindred author Octavia E. Butler won Best Short Story ("Speech Sounds") in 1984 and Best Novelette ("Bloodchild") in 1985, and Samuel R. Delany won Best Short Story ("Time Considered as a Helix of Semi-Precious Stones") in 1970.

Jemisin told The New York Times that it was shocking to learn her win was historic:

If it is indeed true, I’m shocked, not in a good way. People of color have always been here. Women have always been here. And for a genre that supposedly prides itself on, to quote Gene Roddenberry, infinite diversity in infinite combinations, and being more progressive than the rest of the world, though there are some that don’t think we should be, for a genre that prides itself on that to have never given the best-novel award to another black person, that’s just bizarre.

The award-winning author also had a few things to say regarding the Sad Puppies: a vocal minority of Hugo voters who have spent the last few years attempting to rig the awards in favor of "traditional" — read: white, male, heterosexual — science fiction. Jemisin mused on the personal significance of her win, and its impact on the Puppies' campaign, in an Aug. 22 blog post:

A few key points of information have pushed me to actually think about The Meaning of The Hugo, though. First off, an interviewer today pointed out an old interview I did back in June of 2011 that asked me where I’d like to be in 5 years. I jokingly said a Hugo would be nice. WELP. Gonna have to come up with a new 5-year goal, huh?

The Puppies would have you think it’s a sign of the oncoming white guy apocalypse, or Affirmative Action Gone Wild, or some conspiracy to pick a random writer, because she’s a black woman, and give her a coveted honor that she cannot possibly have earned, because she’s a black woman. I started to write an Open Letter to them, calling for them to finally wake up and realize they’re a laughingstock as well as ineffective, but… man, fuck those guys. They’re never going to change. And I’ve got shit to do.