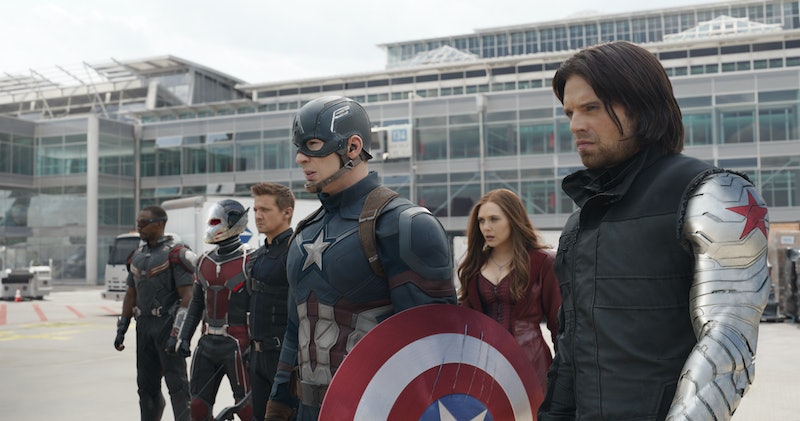 At nearly two-and-a-half hours in length, and containing over a dozen super-powered characters in its roster, this May's Captain America: Civil War was already so overflowing that it's hard to imagine there was anything that didn't make the cut. And yet that assumption has been proven wrong by the release of several Civil War deleted scenes in advance of the movie's debut on home video this September. While some of the scenes and features have focused on the villainous Zemo, or the relationship between Vision and Scarlet Witch, the most interesting of the bunch is undoubtedly a deleted scene featuring Captain America and the Winter Soldier.

The clip, titled "Get Me One Of Those," occurs during the middle of the battle between Team Cap and Team Iron Man at Leipzig Airport, the climactic set piece of the film (although the deleted scene's visual effects remain unfinished). In it, War Machine is seen pursuing Captain America, firing missiles at him until the hero falls and his shield goes flying. The Winter Soldier immediately picks up the vibranium shield and uses his metal arm to chuck it at War Machine, knocking him off his path. Falcon then catches the shield in midair and tosses it back to Cap. "Nice save," Steve says to his friend. "I gotta get me one of those," Bucky responds.

The reason this exchange is so intriguing is because of the way it foreshadows a very famous storyline from the Marvel comic books. On the page, the Civil War arc ends with the death of Captain America, assassinated by Crossbones and a brainwashed Sharon Carter. (This is why so many fans were surprised when the movie didn't end with Cap biting the dust.) After the murder of his childhood friend, Bucky goes on a rampage, targeting the two people he feels are responsible for Steve's death: Red Skull and Iron Man. He only stops when he learns of his friend's two final requests, that Tony Stark help heal the Winter Soldier's mind, and that someone take on the mantle of Captain America after him. Bucky decides the best way to fulfill both of these wishes is to cease his pursuit of vengeance and become Captain America himself.

Bucky expressing his desire to get a red, white, and blue shield of his own in the deleted scene seems like a pointed reference to his character's fate in the comic books. And, lest you think I'm reading to much into such a simple exchange, directors Joe and Anthony Russo confirmed the reference in an interview with IGN. Five days before the scene in question was released, the co-directors were already hinting at its existence, saying that, "There is a scene that is a cut scene. It's a small piece of the fight at Leipzig where there's a very fun interaction between Cap and Bucky, and it kind of hints at a favorite storyline in the books."

The Russos decline to confirm whether or not the interaction was included as an Easter egg to comic book readers, or as foreshadowing for the fact that they'll be adapting that particular storyline in future films: "It's a comic book story, and I can't say whether or not it's going to factor in to the movies." But it certainly seems likely, since Chris Evans notoriously only has one film left on his six-film contract with Marvel Studios, whereas Sebastian Stan is only two films into his impressive nine-film contract. (He made Captain America: The First Avenger prior to signing his current contract with the studio.)

Audiences have long been wondering what the transition between Phase 3 and Phase 4 of the Marvel Cinematic Universe would look like, once the brewing Infinity War with Thanos has come to an end. This deleted scene might hint at the answer: the old guard like Captain America and Iron Man may fall in battle or decide to hang up their tights, and either pass their titles on to the next generation or make room for new heroes entirely. The MCU hasn't ever followed the comics to the letter, but — if this deleted scene is any indication — Bucky Barnes becoming the next Captain America may be one of the storylines the films adapt somewhat faithfully.