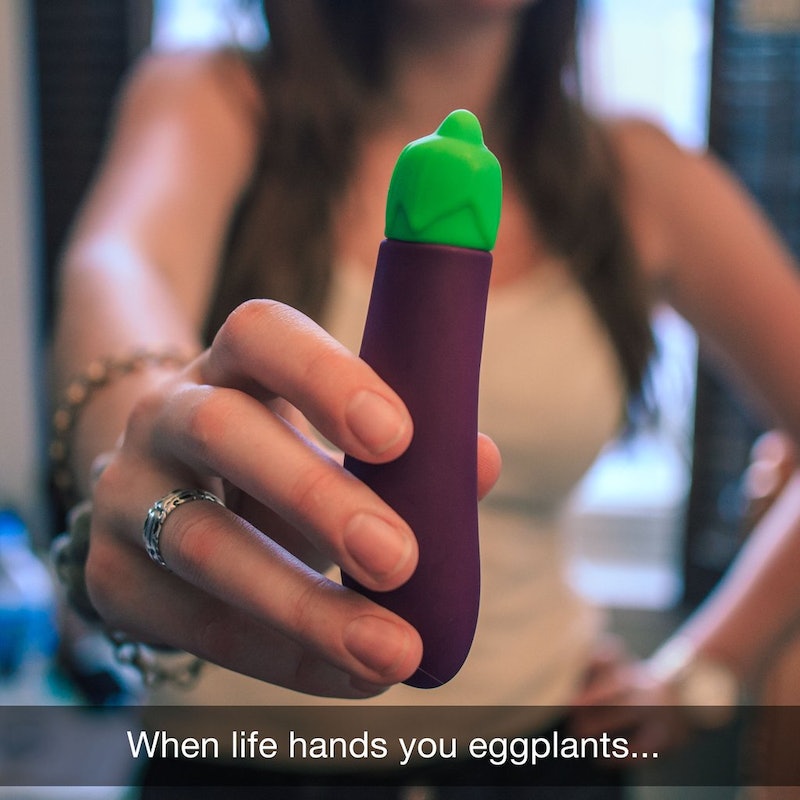 "I wanted to create a product with WOW factor," Jandler told Bustle. "I was working late one night on another project that wasn't quite as exciting when this idea popped into my head. I stopped to catch up with a friend on the phone and we started brainstorming silly ideas back and forth and I suggested this as a joke. We both were like, 'wait this actually has the potential to go viral,' or at least make for a fun story, and couldn't believe it hadn't been done before. That's how the Emojibator was born."

But Jandler’s ingenious Emojibator isn’t the first time the eggplant emoji has leapt off our phones and into the real world. Here are five other ways to get your hands on the eggplant emoji, because, honestly, you can never have too many phallic-shaped things in your life.

Whether your want to let your crush know that they’re on your mind, annoy an ex, or simply give someone a giggle, Eggplant Mail is there for you. For $9.99, Eggplant Mail will ship an eggplant anywhere in the world with a personal message of your choosing ON it. Yes, they write the message on the eggplant, because why waste paper with some silly card? Also, because BRILLIANT. While you’re technically sending a vegetable, considering the fact that the eggplant emoji has become synonymous with the penis, you’re actually sending a great big d*ck. Since that’s the case, choose your message and target wisely.

When you’re super stressed you either want to squeeze something or break something, right? Well, now you can squeeze a di—, er, eggplant. Made of polyurethane, this Eggplant Stress Reliever is easy to squeeze, hold, and can’t be torn apart if your stress takes on a whole new level, making it durable AF. It can also double as a great way to practice your hand job techniques, if we’re to be completely honest here.

Have a birthday coming up? A bachelorette party? Or maybe just need a reason to beat the candy out of an eggplant? Well, then you’re in luck, because the Eggplant Emoji Piñata exists. It’s made to order and all you have to do when you get it is stuff it with all the goodies that one would hope to find in a di—, er, eggplant. It’s definitely a must for your next shindig.

Because there’s no sense in beating around the bush when it comes to what the eggplant emoji really represents, this Eggplant Emoji Throw Pillow gets right to the point by asking “u want this?” Well, of course you do. Who doesn’t? I mean, look at it! It’s a damn throw pillow with an eggplant on it! It’s bound to make every apartment a better place just thanks to its presence.

Sometimes you want to just take your favorite di—, er, emoji everywhere. I know I do. So, for people like me (and I’m sure many like you), there’s the Eggplant Emoji Tote Bag. You’ll always be in style and you’ll always have a conversation starter with you. It’s also by a company called LadyBoner69, because of course it is. So... yeah; it's just a boatload of awesome.