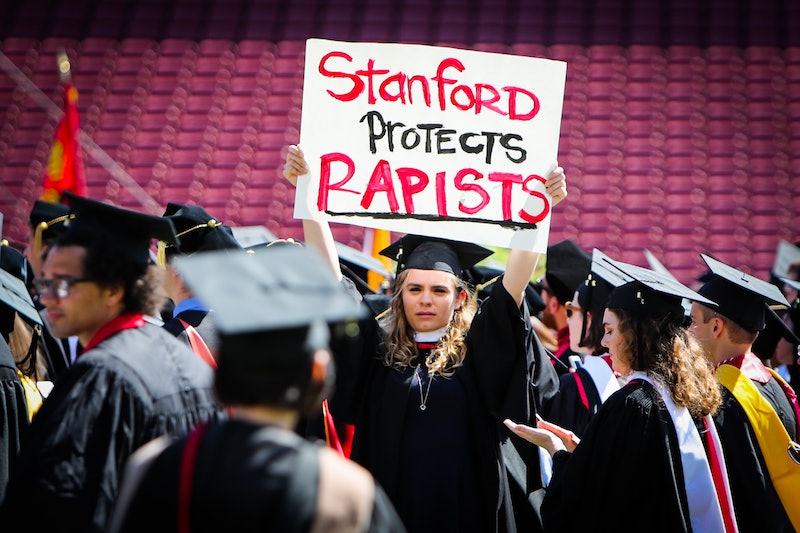 Two months ago, Judge Aaron Persky announced that former Stanford student Brock Turner would serve a minimal sentence after being convicted of sexually assaulting an unconscious woman behind a dumpster. The survivor made a searing victim statement to her assailant. He, in turn, blamed the incident on alcohol and claimed that he wanted to educate youth about the perils of binge drinking. Now, Stanford University has released an updated alcohol policy that many say reinforces the excuses used by Turner and those who believe that the blame for his crime lies with alcohol, rather than with Turner himself. And people are righteously pissed.

The university's press release claims that the policy, which bans hard alcohol from undergraduate housing, is designed to "meaningfully change the campus culture around alcohol." The university appears convinced that alcohol has become a liability on campus. According to a statement about the policy provided to Bustle by Stanford spokesperson Lisa Ann Lapin, "It’s not a response to the Brock Turner case...It is a response to concerns about binge drinking and conversations that began before he was even a student." But the policy seems to strongly suggest that there's an interconnection between alcohol and rape.

"It is impossible to talk about alcohol and not talk about sex," Stanford informed readers in the now-deleted section. "Meeting potential partners (from steady dates to one night hook-ups) is a big part of the drinking scene. That alcohol makes it easier for some to meet and talk to new people is seen as a positive by most people who drink alcohol. The down side is that, by some accounts, alcohol is involved in as many as 75 percent of sexual assaults on a college campus."

This neat "blame it on the alcohol" defense was the same one Brock Turner used, with great effect — Brock Turner has been convicted of sexual assault, but his supporters didn't think he was responsible because he was apparently possessed by the demon alcohol. "Other research studies have shown that men who think they have been drink ing alcohol — even when they have only consumed a placebo — feel sexually aroused and are more responsive to erotic stimuli, including rape scenarios," explained the now-disappeared section of the Stanford website, ignoring the implications of that sentence: That men may think they can get away with using alcohol as an excuse for sexual violence.

Stanford is presenting this policy as an attempt to combat binge drinking, which is a serious problem on college campuses — according to the National Institutes of Health's National Institute on Alcohol Abuse and Alcoholism, "about 1,825 college students between the ages of 18 and 24 die from alcohol-related unintentional injuries, including motor-vehicle crashes." With such incidents so common, it's prudent for any university to discuss alcohol abuse on campus, but the framing, and the timing, of this particular policy announcement is unfortunate at best and sinister at worst.

Stanford cannot entirely be faulted for when it released the news, as it was clearly aiming to get the policy in place before the fall term. It's unfair to claim that this statement was released "in response to" the Turner case — but more than one person probably should have questioned the timing before it went live.

The real problem here is that the policy doesn't just focus on alcohol and directly associated problems. Though the section on alcohol and women's bodies may have been deleted, it certainly gave an indicator about how the university feels when it comes to alcohol and sexual assault, and oddly enough, it sounds a lot like Brock Turner's statement. You know. The man convicted of sexual assault.

In his statement given to Judge Persky during his trial, Turner said:

"At this point in my life, I never want to have a drop of alcohol again. I never want to attend a social gathering that involves alcohol or any situation where people make decisions based on the substances they have consumed. I never want to experience being in a position where it will have a negative impact on my life or someone else’s ever again."

He neatly shifted blame for his actions solely onto alcohol, rather than owning up to the fact that he assaulted someone, and the logic of Stanford's statements on alcohol eerily mimic his: Alcohol makes people do bad things. He blamed "binge drinking" and "promiscuity," and Stanford's initial release and supporting materials reinforced that, suggesting that undergraduates literally need an adult to protect them from the possibility of being found guilty of rape after sexually assaulting someone.

Stanford, like almost all college campuses, has a sexual assault problem that it needs to address. Sexual assault, however, is a separate issue from alcohol. The university could have delivered a powerful one-two punch and sharp rebuke had it released a new alcohol policy focusing on binge drinking and health risks and a separate campus sexual assault policy that used proactive language placing responsibility for rape onto the shoulders of rapists. Clearly delineating and separating these issues could have set the bar high for other college campuses, but instead, Stanford seems to have taken the sloppy and easy route, implying that it's okay to blame rape victims for being drunk.